One of the benefits of being President of ICE, is that I can go to any class I want. So on Monday Feb 22nd, I joined the Culinary Management students at ICE for a special morning talk and tasting from Randall Grahm, founder of Central California’s Bonny Doon Vineyard, and one of the original “Rhone Rangers” (a term granted to those who preserve and produce Rhone varietals in California).

Grahm’s website biography describes him as a “vitizen of the world, champion of the strange, and the heterodox of the ugly duckling grape varietals whose very existence is threatened by the dominant Cabo- and Chardon-centric paradigms.” Grahm has been honored by The James Beard Foundation, Cooks Magazine and was the Bon Appetit 1999 Wine & Spirits Professional of the Year. 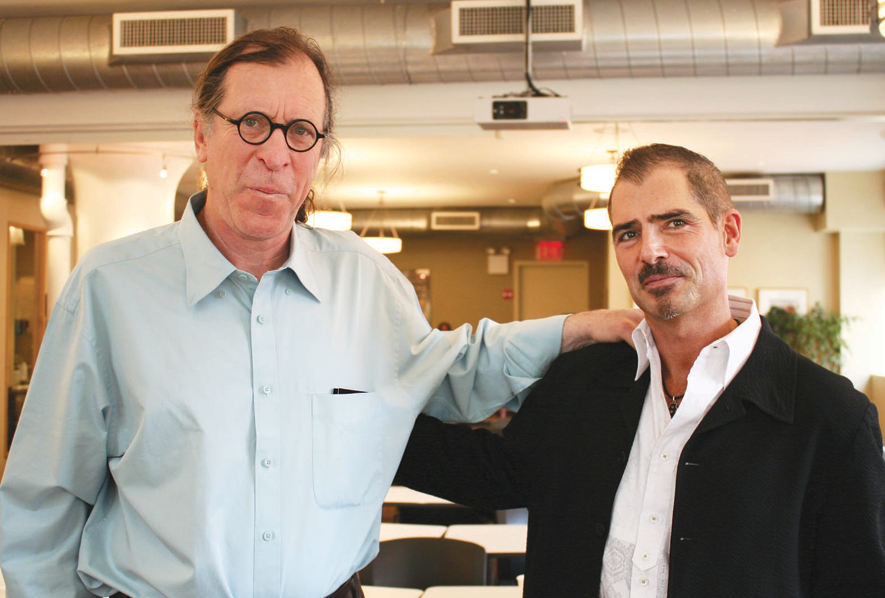 Grahm’s comments and stories meandered from the past, to the present and to the future. He told the students that when he was starting out in the 80’s, his vineyards’ “goofy labels and funny pictures” were simply a way to draw attention to his brand, because the wines were unusual. Grahm expressed that too many of today’s winemakers don’t take chances as these days wine is such a big business. He further explained that many winemakers simply cannot afford to make wines that taste perfect to their individual palate. Instead, they must appeal to trends. As for the near future, Grahm’s goal is to produce more estates’ bottled wines (wines in which the grapes have been grown and the wine bottled on one property). Grahm had firm opinions on the subjects of wine evaluation and critics.

On the macro level, Grahm commented that to really evaluate a wine, you have to taste it several times, ideally under different conditions, with the problem being that professional wine critics simply do not have the time to follow that practice. Mega tasting events and multiple flights at industry panels allow for a few sips of many wines in a short period of time. As for the powerful and esteemed Robert Parker Jr., Graham noted that, “Winemakers can hire consultants that specialize in wines that Parker will like.” As the world knows, Parker prefers big wines, particularly those from Bordeaux. (Many argue that Parker’s name and reputation began with his enthusiasm for the now coveted 1982 vintage in Bordeaux.)

Grahm thinks that Bordeaux wines of today “will not age the way they did in the past” because winemakers are increasingly vinifying for Parker’s robust taste. Very few of them create wines that will develop; instead, they are full and bold in their youth. There will be some “bad surprises when certain collectors go to open their trophy bottles” in the future, he said. Our expert from Santa Cruz had an interesting take on screw tops. Grahm thinks that the screw top changes the way the wines evolve, particularly with red wines.

He added that “In the long run, the wine will be better, but in the short term, there is some minor retardation.” That period of retardation can be anywhere from six months to three years depending on factors in the grapes, the grape fermentation, sanitation in the winery and the aging conditions. Grahm was one of the first California winemakers to start using screw tops for medium to high-end wines.

At the time, his colleagues thought he was insane, but gradually, the American wine industry is incorporating non-cork options more frequently. While seemingly a very open-minded fellow, Graham had mixed feelings about the proliferation of new wineries, wine regions and winemaking countries around the world. Without naming names, he said that too many of the new efforts seemed “industrial,” while at the same time, some great old world vineyards in France and Italy were closing. The saturation of the market creates competition that some historical and traditional wineries cannot compete with.

As for the quality, Grahm is not ready to curl up with a good book and a wine from Brazil or Colorado but did say interesting things were being made in South Dakota. Overall, his wine battles lie in “wines of terroir” vs. “wines of effort.” Terroir being the French expression for the nuances imparted in wines by the climate, soil, irrigation and other un-explainable forces that make a wine particular. “Wines of effort” refers to those that are created against the natural tendencies of the earth. An example was when Grahm started his career, he wanted to plant Pinot Noir simply because it was difficult, not because it would succeed in Santa Cruz. He admits that he has made many wines of effort during his career.

But currently, the company focuses on estate bottling and biodynamics (a practice that Grahm is very well known for in the United States) in an effort to evolve Bonny Doon to a producer of wines of terroir. As for the wine treats that he brought along for students to try (but not swallow?), the list included: 2007 Le Vol Des Anges – Beeswax Vineyard 2007 Le Cigare Blanc – Beeswax Vineyard 2005 Le Cigare Volant – Red Wine of the Earth 2008 Vin Gris De Cigare – Rose Wine of the Earth 2008 Albarino – Cal Del Solo Estate Vineyard.