My last post dealt with handling the roasted bean—crushing it into nibs, separating its shell, grinding it into fluid cocoa liquor and extracting pure cocoa butter. During this final stage, the chocolate maker faces the challenge of tasting a bean's full potential and identifying the subtle nuances within.

The final steps in processing our bean-to-bar chocolate make up the longest phase of the manufacturing process—a waiting game where the true essence of the bean, its complex flavor and its silky texture are unlocked. At this point, we focus on physically breaking the bean's coarse texture, revealing subtleties beneath its bitter astringency and liberating its cocoa butter. Though we add ingredients at this stage, there is also an aspect of elimination—the refining stage is followed by conching, which peels away unwanted volatile flavors. 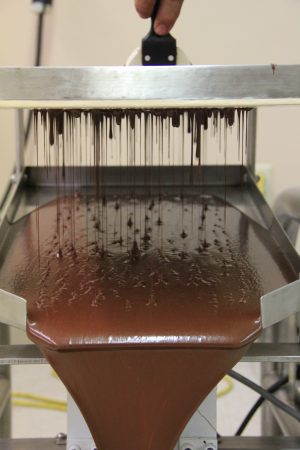 While the goal of the “craft” chocolate maker working primarily in single origin batches is often to enable the expression of that bean's inner essence, an industrial manufacturer's typical aim is to create consistency from batch to batch, from year to year. Neither approach is qualitatively better or more difficult—just two possible approaches employed in the final stage of chocolate making.

With agitation, the steel balls begin breaking down the fairly large particles in the liquor, refining them down to a target of around 20 microns—in terms of scale, one micron (µm) is one-millionth of a meter (or one-thousandth of a millimeter).

More accurately, true particle size in chocolate will lie along a curve, or a distribution, some smaller and some larger than our target. Looking closely at the structure of chocolate, it is simply very small solid particles (cocoa solids, sugar and sometimes milk solids) dispersed in fat—cocoa butter.

Because the threshold of perception of a particle on our palate is in the neighborhood of about 35µm, a smooth, creamy mouthfeel depends upon breaking down the solids below that mark. Particles that are too small (below 15µm), however, will create too much surface area for the available cocoa butter, thus adversely affecting the flow properties of the chocolate with increased viscosity.

Most often, we add our ground liquor to the ball mill to refine for some time before adding any other ingredients. As the liquor continues to break down, more of its cocoa butter is released, providing sufficient fluidity to begin processing additional dry ingredients, namely sugar and, in the case of milk chocolate, whole milk powder.

Virtually all of our chocolate receives an additional boost of cocoa butter as well. Vanilla, a common but not compulsory addition, can enter into the mix in various forms. I typically chop up whole vanilla beans and add them early in the refining process.

Though the majority of the dozens of batches created in the lab have been of single origin, I have begun working on blending beans, and even introducing additional flavors—whole coffee beans, spices and nuts—to thoroughly integrate into the finished product. For our first attempt at a vegan milk chocolate, I replaced conventional milk powder with freeze-dried coconut milk. Refining time can vary, depending upon the batch size, particle size of the liquor and by agitation speed.

In addition to speed control, our ball mill also offers temperature control and heated airflow. Lacking a stand-alone conching machine, this heat and airflow help us replicate some of the effects of traditional conching. In basic terms, the conching phase is best described as heated agitation.

Three key aspects of conching are moisture reduction, texture and flow enhancement and development of flavor. Residual moisture in chocolate can affect its flow properties, even though a great deal of the raw bean’s water was removed during the roast, trace amounts remain through the grinding and refining process.

Prolonged mixing also helps ensure that all of the tiny solid particles are evenly dispersed in and coated by the cocoa butter, which improves mouthfeel and workability. And finally, the heat and forced air aid in driving off some of the remaining volatile acids – unwanted flavors that are a byproduct of fermentation back at the bean’s origin.

Conching is an important part of the process, but each chocolate will require varying amounts. Long a marketing myth in the chocolate industry, a longer conching time does not necessarily equal higher quality. Some argue that excess conching may even destroy desirable flavors.

Once the chocolate is deemed ‘finished,’ it is extracted from the ball mill (we also employ two small stone grinders for smaller experimental test batches) and passed through a vibrating sifter—imagine a super-fine mesh strainer—which catches any particles not sufficiently refined. The radicle, the hard and bitter germ stem in every cocoa bean, may stubbornly evade grinding, along with the occasional bit of vanilla bean that sticks to the agitator.

After sifting, it’s time for tempering and molding, right? Well, not so fast.

Aging chocolate for a period of time, though unpredictable and not fully understood, is common practice. Some chocolate makers prefer to temper, mold and package chocolate immediately, others will age chocolate from two weeks to one month. Though there may be little one can do to change the finished product at that point, most believe that the true character of the chocolate will not reveal itself until it has had a minimum three-week mellowing period.

One of the ongoing projects here in the lab is to hold back portions of each batch to sample at regular intervals to track some of these still-inexplicable changes over time. As with other stages of the chocolate making process, success during refining relies on equal parts science, experience, taste, patience and arguably, some degree of intuition. The key is understanding that each part of the process presents a new set of variables. The next dispatch in this series will address formulation— the recipe development phase for each batch of chocolate.

Want to dive into the chocolate lab with Chef Michael? Click here for a list of his upcoming workshops at ICE.