Every step of the chocolate-making process, from fruit to bean to bar, presents an opportunity to influence the flavor and texture of the finished chocolate. After harvesting, fermenting and drying at origin, beans are shipped around the world. Once received at the factory, raw cocoa undergoes several steps of transformation—what we call the “bean-to-bar” process. Previously I’ve discussed the bean-to-bar steps of sourcing and roasting. In this post, we will look at the intermediate steps necessary to turn flavorful roasted beans into the refined product we know and enjoy.

The nuanced flavors and smooth texture we associate with chocolate evolved during the Industrial Revolution, alongside the general advancement of technology and mechanization in the mid to late 19th century. This rise of the machine, so to speak, not only made chocolate products readily available to the masses, but it also catapulted what was a coarse bar or a rustic beverage to more sophisticated heights.

Key players responsible for the machines and processes developed during this time remain some of the most recognized names in contemporary chocolate production today, including Van Houten, Peters, Nestlé and Lindt. Machinery remains a constant in the contemporary chocolate-making process, and many visitors to the ICE Chocolate Lab are surprised by the sheer number and diversity of machines we employ.

Below, I’ll explain the three processing steps, and their dedicated machines, that bridge the gap between roasting and refining. Each bean has an outer shell, the germ stem (or radicle) and the nib, the latter of which contains a fat content of roughly 50-55%. Once out of the roaster and cooled, we must first break the bean and remove its shell.

The removal of the shell is important for flavor, texture and food safety reasons: too much shell in our finished chocolate can produce a musty flavor and gritty texture and excessive wear and tear on our equipment. Additionally, while we have rendered the beans safe to handle from a microbial perspective by roasting, the high levels of heavy metals harbored in the shell are reason enough to discard them. In short, the shells do not positively impact flavor and are not considered “wholesome.” 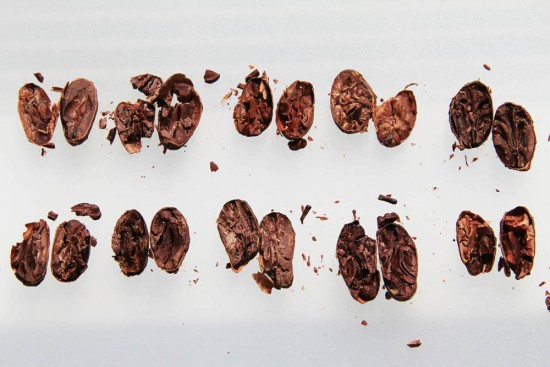 To remove the shells, we employ a winnowing machine, which yields only the nib, roughly 85% of its original weight, for further processing. We load the whole roasted beans into a hopper that funnels them through a rotating gear, crushing the bean and separating nibs from their shells, which have already loosened during the roasting phase.

The fractured pieces then fall through a series of vibrating screens, causing the bits of nibs and shell to “dance” their way toward a vacuum which will suck the lighter shell from the screen while allowing the heavier nibs to pass through untouched. Our goal is to minimize the amount of shell in our nibs, while preventing any nibs from inadvertently getting discarded, so constant adjustment of the winnowing machine is necessary. We can control the rate of breaking the beans, the flow of particles along the screens and the intensity of the vacuum.

Because shell weight can vary from bean to bean, we constantly monitor the nibs as they fall into a collection bin. From unsorted raw bean to cleaned nibs, it is not uncommon to lose 20-25% of our original weight of product. Freed from their shells, the nibs then begin an intermediate grinding phase. Any number of grinding methods can perform this function, but in our lab we pass the nibs through a rotating hammer mill, which impacts the nibs at high speed, forcing them through three progressively smaller screens.

The result is a coarse, semi-liquid paste that we refer to as chocolate “liquor”—confusing, as there is no alcohol present. This liquor is a suspension of dry cocoa solids, which vary in size up to a few hundred microns, in cocoa butter that is liberated from the nib and liquefied due to the heat of friction created during grinding. Each pass through the mill both saves time and reduces wear on the next stage of refining equipment.

The final pass also often allows us the opportunity to isolate and remove a good deal of the hard, bitter radicles, which can contribute a harsh flavor and gritty texture to finished chocolate. Leaving the hammer mill, the liquor then enters a ball mill, along with any additional ingredients—at a minimum, sugar and additional cocoa butter—to achieve a final particle size near 20 microns. 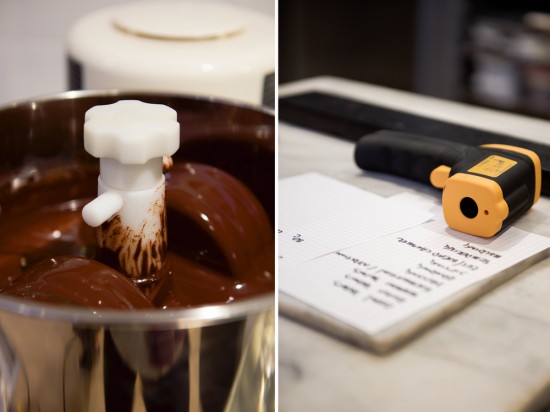 The ability to press the added cocoa butter in the ball mill stage ourselves is one of the most exciting aspects of our production in the ICE Chocolate Lab. Up to two kilograms of our ground liquor is loaded into a heated pot and secured onto a hydraulic press. Gradually ramping up pressure over an hour or two—topping out at some 65 tons—will yield between 40-45% cocoa butter, which, unlike commercial deodorizer butter, emerges with significant flavor and aroma intact.

This supplemental fat is used to boost the final cocoa butter content of the finished product, which for couverture-grade chocolate lies between 35-40%, maximizing fluidity and mouthfeel. The machines we employ during these intermediary steps between roasting and refining typify how advancements in technology have helped make chocolate production more efficient and consistent.

The next installment in this blog series will pick up with formulation, refining and conching—the final steps in which the chocolate maker can influence the finished product’s complex characteristics.

Behind the Product Development Process

How to Make Taffy