As I round the corner on the last lap of culinary school, it’s amazing to consider how far my classmates and I have come. Less than eight months ago, many of us didn’t know how to tell the difference between oregano and marjoram. Today, we’re tackling the recipes of the greatest chefs of our time. 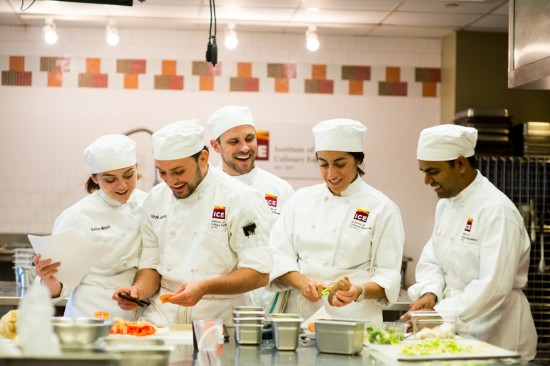 After working through a seemingly endless array of techniques, our class has arrived at the point in our program where we spend five days crafting menus by five incredible chefs: Mario Batali, Daniel Boulud, Thomas Keller, Rick Bayless and Ming Tsai.

Yet, despite the caliber of these culinary leaders, I didn't initially feel excited about these lessons. Of course, I have immense respect for all these chefs, but, as a student, I have typically found that I learn more by studying a general concept than by following a recipe.

But oh, how I was wrong. Just like any line cook who has worked under a truly great chef, “merely following a recipe” turned out to be quite the lesson in and of itself. When you’re attempting to recreate the classic dishes of these chefs’ fine dining establishments, recipes that might traditionally consist of three to four steps often require six, seven or even 17 steps to accomplish.

Now, certainly you might ask, “If they’re such master chefs, shouldn’t they be able to accomplish delicious dishes more efficiently?” The answer is yes—but these chefs aren’t just working fast, they’re actually redefining the limits of delicious.

Take, for example, Mario Batali’s Fennel Dusted Sweetbreads: Chef Batali doesn’t use just one type of onion, he uses four! Any good cook knows that shallots, white onions, red onions and scallions all have different properties, and Batali uses each to build complexity and interest in what could have been just any rustic offal dish.

Despite having frequently cooked clams or mussels before, I never previously considered transforming this cooking by-product into the base for a flavorful seafood soup or the starting point for a chowder-like sauce. In both cases, the results were brilliant.

In short, these lessons were “aha!” moments for me on two fronts. First and foremost, they increased my respect for not only these chefs, but also for every line cook who has ever worked in a fine dining establishment. Second, they conveyed the importance of a well-written recipe, both as an effective guide and an educational tool.

As the end of our program draws near, and we enter into lessons in which we will devise our own creative recipes, I have already begun to apply the lessons that I have learned from these culinary masters—and I can say with confidence that learning to cook a great chef’s signature dish is 100% more satisfying than simply ordering it at a restaurant.

Interested in pursuing a career in the Culinary Arts? Click here to learn more and schedule your personal tour of ICE.