The co-owner and co-chef of a beloved restaurant group talks about finding home in Seattle, expanding to Portland and how family keeps it all together.

When Rachel Yang (Culinary, ‘01) came to the United States from South Korea at 15 years old, she didn’t have restaurants in mind for her future. After an Ivy League education, she turned to culinary school out of curiosity and found the ratio of creativity to science that she’d been searching for.

“Food has always been a big part of my life, but I came to the states to have a more well-rounded education, to go to a good college and then to possibly go back to South Korea with a profession, like as a doctor or a lawyer or a professor, but things didn’t go that way,” Rachel says.

She graduated from Brown University in 2000 with degrees in fine art and urban studies, but she didn’t know exactly what she wanted to do after graduation.

“We made the family decision that I would explore this cooking thing,” Rachel says. “It wasn’t really with the intention of being a professional cook. It was moreso to see what cooking school was all about and what else is out there.”

She chose the Institute of Culinary Education because it was in New York City and offered a shorter program than other schools. She didn’t want to pursue a two- or four-year culinary program after just completing four years of college. A 10-month program was ideal, and she began classes in the fall of 2000.

“I really felt at home. More than anything, learning to cook satisfied the artistic, creative approach I always enjoyed, at the same time being very scientific, hands-on, cognitive, organizational and full of multitasking,” Rachel says.

She remembers enjoying learning about the histories and techniques of global cuisines and relishing the platform to create and play at school. Rachel was also thrilled to be studying in New York, an incredible food city where she found work in the prepared food department and butcher shop at Whole Foods while she was a student.

“It was cool to learn in school and at the same time apply it on a large scale,” she says. “Working with food in general got me really excited, and it was something I’d never done before, being on my feet all day and working with knives.”

Though she felt at ease right away, she knew that externship was the real test both for graduation and a career in the kitchen. Rachel was excited to secure a coveted spot working for Chef Daniel Boulud at DB Bistro Moderne. She felt prepared by her experience at ICE to cook French food in a fine-dining restaurant.

“The biggest thing about externship is that the skill set you have is little, so you have to have the attitude that you’re there for anything and everything,” Rachel says.

She hustled as garde manger, learning to make salad and soup each night.

“Working dinner service was like putting on a whole show every day,” Rachel says. “I loved being able to perform every day with fellow cooks. Collaborating with this team of people who were all passionate and worked really hard made me realize this was what I wanted to do for the rest of my life. I thought that it was the coolest thing ever to be a part of it.”

The rest is basically history. After she finished her externship, Rachel was offered a full-time position at DB Bistro Moderne, where she cooked for nearly three years. Then, she worked at Alain Ducasse at the Essex House, where she met her husband and partner Chef Seif Chirchi. According to Rachel, he had been working at the restaurant for six months when she started and he was one of the nicest people she’d ever met.

“He was really passionate about food and he was goofy and funny in a way that really brought joy to the kitchen,” she says. “That’s when we started cooking together and connected.”

Next, she cooked at Per Se for about a year before she was offered a role as a consultant for a forthcoming modern Korean restaurant in Chelsea called D’or Ahn. Quickly, Rachel transitioned to the position of opening chef. The restaurant’s tiny kitchen was in the basement and she had to learn how to operate and cook in a small space after working for years in big, fine-dining restaurants. It allowed her to understand how most chefs cook.

“That experience made me realize what real cooking and being in charge of a place is all about,” Chef Rachel says. “It changed my life because I realized people noticed and cared what I was cooking. I got to show my perspective on the food I grew up eating. Cooking French food teaches you craftsmanship and artistry, but when you get to create your own food it’s so inspiring.” 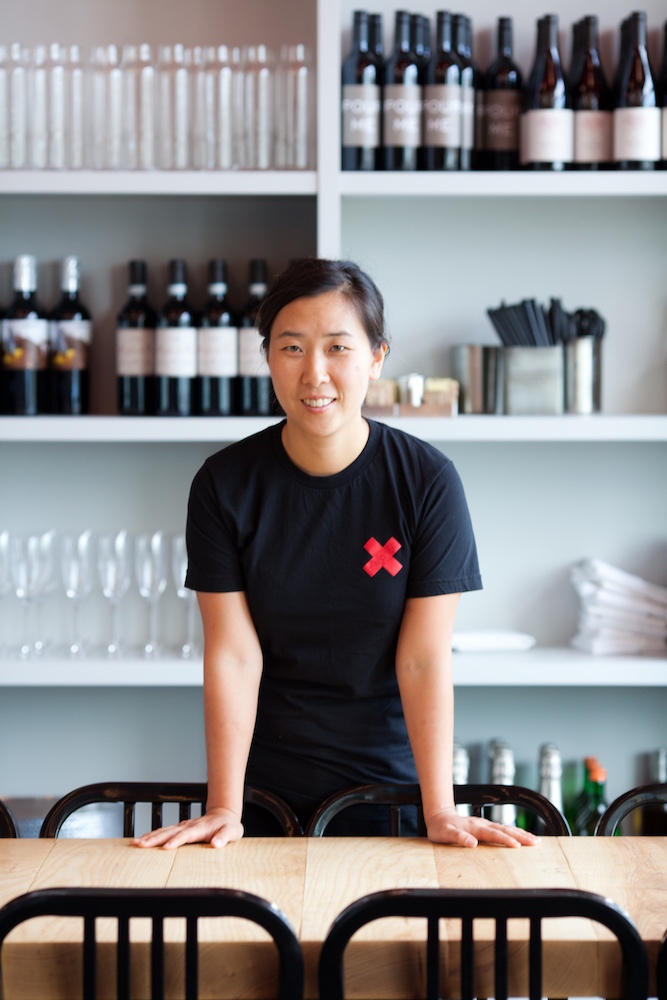 After seven months of applying her fine dining chops to her native cuisine, Rachel decided it was time to leave New York.

“Seif’s family was in Portland. Being close to family was important, and my family was still all in South Korea,” she says. “I’d never lived on the West Coast before, and we came out to visit once, and it was really amazing. The scenery of the city and proximity to nature was so nice that we decided this was the place we could start our new life.”

Rachel and Seif moved to Seattle in 2007 and opened a restaurant for someone else. They were opening chefs for about six months before parting ways, then felt a bit lost in a brand new city. This pause gave them the opportunity to figure out what they wanted to do, leading to their first restaurant opening, Joule.

They didn’t have a large budget, so they found a tiny storefront just outside the downtown area. They bought some Ikea furniture, put up fresh wallpaper, painted the rails and opened the doors in November 2007.

Serving refined Korean fare using classic techniques, Joule was met with local and national acclaim. This put Rachel and Seif on the map, gaining the couple invitations to cook at events across the country and eventually landing them a spot to compete on “Iron Chef” in 2010. They’ve also been semifinalists or nominees for the James Beard Award for Best Chef: Northwest every year since the restaurant opened.

In 2010, they met their current partners, the real estate developers who had a space available in Fremont.

“We didn’t know we were ready for a second restaurant,” Chef Rachel says. “We were doing okay; the first restaurant wasn’t an immediate, giant success, but we didn’t want to say no to this amazing opportunity, so we went for it.”

“To our surprise, it was an overnight success,” Rachel says. “A couple months after we opened, we were busy every single day.”

The momentum hasn’t let up since. The couple reimagined Joule as a contemporary Korean steakhouse and expanded its space in 2013. In 2014, they opened Trove, a Korean barbecue spot in Capitol Hill.

In 2016, Rachel and Seif set out to conquer more of the Pacific Northwest by opening Revelry in Portland, Oregon. The restaurant, as the name suggests, is similar to Seattle’s Revel, serving favorites like the kimchi pancake as well as some PDX-specific bites. At the end of 2017, Rachel released her first cookbook, “My Rice Bowl: Korean Cooking Outside the Lines.”

Now, Rachel and Seif are finally starting to slow down – on expansion, that is. Once Revel moves back into its Fremont space that was just rebuilt (it’s been temporarily located in South Lake Union), they’re not planning anything new for the near future. The duo is focusing on giving each Relay Restaurant Group spot the love and attention it deserves.

“I’m still very much involved in day-to-day service and operations,” Chef Rachel says. “When you have multiple restaurants, you’re never in one place and always jumping around. It’s a juggle. Having different menus and people to work with is really fun, though. I’m still in charge of final approvals for the menus because we have a unique kind of food that you can’t find everywhere.”

That means Rachel and Seif each go to Portland about once per week, but they still prioritize their sons, Pike and Rye, who are six and eight years old. With a super supportive family that always visits the restaurants and helps each other out, the couple has found a busy balance that allows them to spend time in the kitchen and also at their sons’ soccer games.

“We’re enjoying what we have right now,” Rachel says.

Explore this cooking thing in a year or less with ICE's Culinary Arts program in Los Angeles and New York.