This military vet who took three culinary school programs has found his calling.

After 15 years in the military, Joshua McCain left active duty to pursue his lifelong passion for cooking. He studied culinary arts, restaurant management and pastry arts before choosing a future in chocolate.

Joshua McCain (Management, ‘18/Pastry, ‘21) didn’t always love to cook. At first, he simply made food to help his family. As the oldest of four children to a single mother, Joshua was often responsible for feeding his siblings. Over time, however, he grew to love the kitchen.

“Necessity turned into interest,” he says. “I started off making a lot of mistakes like putting cinnamon in scrambled eggs. Eventually, I got better.”

When Joshua graduated from high school, he delivered for Pizza Hut while he figured out his path. After September 11, 2001, he knew exactly what he wanted to do: “I woke up one morning and I saw the towers go down,” Joshua recalls. “Then I went to the recruiter’s office and started my military career. I wanted to serve my country.”

Joshua worked hard and climbed the ranks in the Army for more than a decade. He toured in Iraq and Afghanistan and earned the Bronze Star and Meritorious Service medals before deciding to leave active duty. “The military is a great place to be, but I just wasn’t happy anymore.”

For his next chapter, Joshua joined the National Guard in a part-time capacity and enrolled in the culinary program at the now-closed International Culinary Center (ICC). He immersed himself in the food world, volunteering at the James Beard House and attending every event he could. “I was a 34-year-old guy entering a young man’s game, so I needed to get some experience and I needed it quick,” he says.

Joshua completed his externship at Dan Kluger's Loring Place and then took a job as a runner at Maialino for a crash course in front-of-house hospitality. “I went from running a 22-person team in a combat stress environment in southern Afghanistan and being responsible for millions of dollars of equipment to learning how to polish a fork from an 18 year old. It was humbling for me and I learned a lot from that,” he admits. 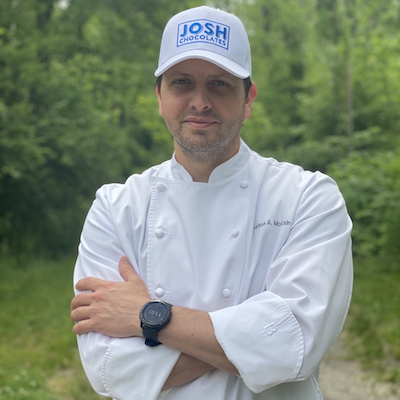 After a while, however, Joshua realized that the business might not be a good fit. “I don’t know if private chef work is the right place for me because I enjoy working under my own creativity, and I realized that you really cater to your client and what they want,” he reflects.

Instead, Joshua enrolled in the Restaurant & Culinary Management program at ICE, where he was honored with a leadership award by the end, and then enrolled in the Pastry & Baking Arts program to round out his education. “There’s so much to be learned from being surrounded by people who are incredibly talented,” he says. “That’s what you get from being at ICE. The real value is in the network that you build.”

While in the pastry arts program, Joshua became curious about chocolate making. Before he even reached the chocolate module, he began making chocolate by reading and watching YouTube videos. He purchased his own equipment, sourced beans from Hacienda San Jose — a Rainforest Alliance Certified cocoa plantation in Ecuador — and crafted his own bars. 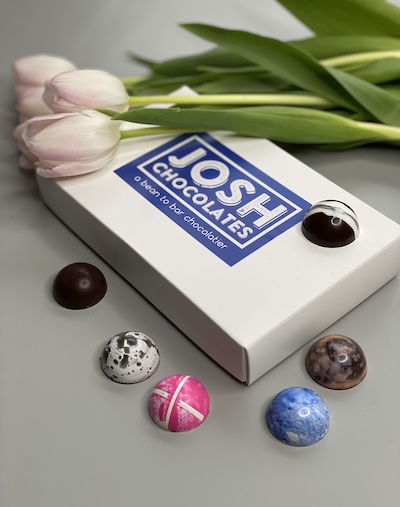 Joshua’s fiancée brought his chocolate bars to her office and her coworkers immediately asked to purchase more. As requests steadily came in, Josh Chocolates was born, and Joshua rented space in an incubator called Garden State Kitchen to keep up with production of his bars and bonbons.

It’s important to Joshua that he’s in control of the process from start to finish, which is why he roasts, grinds, mixes and paints the chocolate himself. “The roasting is where the chocolate maker puts his mark,” he says. “That’s where the flavor profile of the bean comes out. If I could grow my own cocoa trees in New Jersey, I’d probably have a few planted in the ground already.”

The company is already taking off, which Joshua attributes to his time at ICE. “I failed at quite a few businesses before I started this one,” he shares. “I knew how to recover from failure because of the education I got in the management course. I’ve been able to learn from my mistakes.”

Now, Joshua is selling his chocolate on his website and at a local farmers market. He’s received inquiries about wholesale, which he plans to pursue, and he’ll soon start to search for a retail location. He would love to open a bean-to-bar café that offers chocolate, coffee and pastries in the morning and cocktails and chocolate savory bites in the evening.

Joshua has a full plate with developing his chocolate business, serving in the National Guard, training for a triathlon and raising his four sons — but he’s never been happier. “After being a three-time war vet and having a super stressful career, the kitchen is the one place I can be myself and create something that I’m proud of for everybody else,” he raves. “It took me a long time to find chocolate, but chocolate makes me super happy.” What more can you ask for?

Explore military benefits at the Institute of Culinary Education.