Sixty-seven culinary educators from all over the Empire State came together at ICE this week for the annual ProStart Educators Conference.

ProStart is a national program that prepares high school students for careers in the culinary world. The educators got a full taste of all the sights, sounds, and of course, the flavors that New York City and ICE have to offer.

The conference kicked off with a Seasonal Offerings demo from ICE Chef Instructor Richard Ruben. Chef Richard pulled out all the stops and discussed how to use herbs and spices while shedding some light on the importance of seasonality. He demonstrated how to make tasty dishes from whatever was available at the local farmers market that day. A highlight of the conference was the personal, behind-the-scenes tour of restaurant Daniel, which was extra exciting when Chef Daniel Boulud himself stopped by to talk to the group and give advice for those influencing the next generation of young chefs. 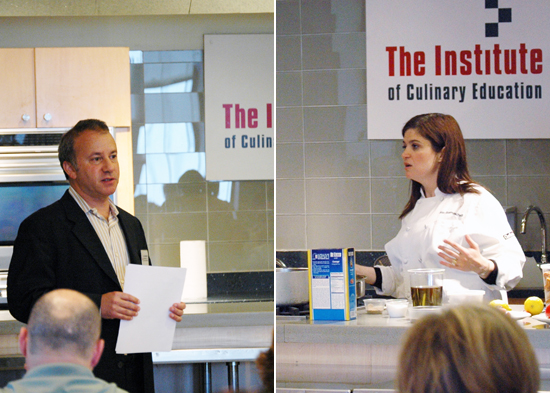 The kitchens are rarely open for tours and it was an amazing opportunity for the educators to see the staff in action as the got ready to serve dinner later that day. One of the educators even ran into a former student now working at Daniel during our tour of the prep kitchens! Next up was a full info-session on the advanced culinary education process, including the different programs at ICE, as well as a question and answer session with the directors of the Culinary Arts, Pastry & Baking Arts, Culinary Management and Hospitality Management programs, as well as with the Director of the School, Director of Admissions, and Director of Career Services who discussed ICE’s externship placement programs and jobs in the industry. The first day culminated in an Around the World cooking extravaganza! The educators were broken into 4 groups to do a hands-on cooking class that included French, Thai, Spanish and Italian cuisines.

The educators had a chance to pick the brains of ICE President and CEO Rick Smilow and his co-author Anne E. McBride regarding their book Culinary Careers, which each attendee has received as a gift the day before. The educators were able to gain insight into the different career paths someone can take in the food world. Last up on the agenda was a three-course meal cooking demonstration from former ICE Chef Instructor Alex Guarnaschelli, executive chef, and owner of renowned restaurant Butter and host of Alex’s Day Off on the Food Network.

The educators were able to pose their questions about life in restaurants to another of the industry’s leading chefs. It was certainly a delicious way to wrap up the conference. The educators’ in-depth tour of ICE and New York City left them with new ideas on how to best prepare their students for the restaurant industry and the culinary world. Everyone left excited to have seen so much of culinary world at ICE and ready put their new insights into practice. We look forward to having the educators and their students here again soon!