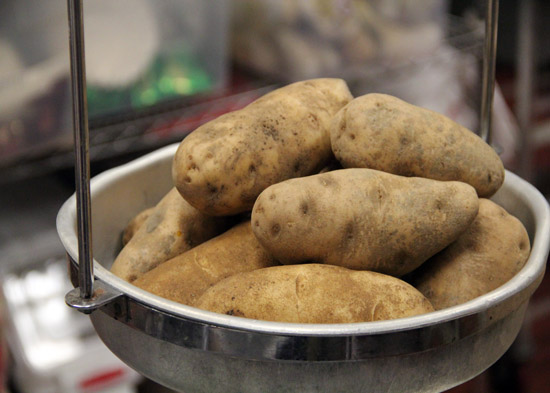 My current Mod 3 students are fast workers. Organized and efficient, they usually finish their daily recipes with time to spare.  I want to get the most out of the four-hour class and since I don't like them standing around with nothing to do, I'll give them extra practice. One day last week, when we had some downtime, I said to the class, "ok guys, we have an hour before our food will come out of the oven, so everyone grab two potatoes and practice tournes."

Not surprisingly, this announcement produced a good-natured groan from the room. We had been working on these all week. Tourne is a football-shaped knife cut, carved out of potatoes and other vegetables. It is difficult to do and takes lots of practice. The students began their tournes, focusing on cutting seven curved, even sides from each piece. Despite their focus, it is a challenging knife cut and students struggled with the mechanics of it.

Jokingly, the students continued to protest. "Is there a machine that will cut these?" one asked. "Can we ever do another knife cut?" another wondered aloud. As they worked, I moved around the room, checking their progress. My critique of each set was almost always the same, they're better than last time - keep practicing.

Each day, the students learn something new: new techniques, new ingredients, new ways to present and plate food. We try to expose them to as much of the food world as possible while they're at ICE and they expect new information every day. This is unlike a restaurant, where usually the cook is repeating the same recipes, again and again, day after day. Menus don't change very often and cooks will work the same station in the kitchen for a long time.

Doing the same task over and over again can feel tedious, but this is how chefs begin to master different techniques and recipes. Repetition is the key. Still, it's hard sometimes for the students to remember that each flawed tourne is a small step in this journey from apprentice to master. It's not always easy to see your own progress from one day to another.

Recognizing the students' frustration, I offered to demo one. The students watched me produce a (nearly) perfect tourne and asked me to show them the "trick." "I wish I had one," I answered. "The trick is doing it a thousand times." This is true of any craft. Whether it's julienning a carrot, playing the piano or hitting a home run at Yankee Stadium, these are only done flawlessly after lots of practice.

And whether it's Daniel Boulud or Derek Jeter, you'll usually find those individuals that have "mastered" their trade still practicing, still regularly devoting time to maintain and hone their skills. Mastering any skill takes time and while we all may not relish the practice, it's something we all can use - no matter where we are on our career path.