Pick Your Poison (and a Bar Concept to Go With)

Ethan Fixell is a beer, wine and spirits writer and educator from New York City. He contributes to over a dozen different publications, though he most frequently writes for Food & Wine, Men's Journal and Quartz.

I drink a lot. As a beverage writer and educator, I like to think of myself as fairly knowledgeable when it comes to cocktails. And yet, after recently sitting in on ICE's "Cocktail Recipe Development" class, I'm almost embarrassed to admit just how much I actually learned.

The class was the final session of ICE's new six-week Professional Mixology program, which, led by the school’s Director of Beverage Studies Anthony Caporale, explores topics ranging from mixology history and technique, to cocktail construction, to practical bar management. In this ultimate session, students — who range from curious foodies to prospective bar owners — were given the chance to flex their newfound cocktail knowledge by assembling a custom bar menu and preparing the prospective drinks for their colleagues.

I, for one, was thrilled to participate as a mock bar-goer: Over the course of two hours, each student stood up to describe his or her bar concept to the class, read a menu of up to five cocktails (priced according to a standardized formula) and concocted beverages for thirsty classmates. Below are my notes on some of the most intriguing presentations I witnessed (and drank!) in this incredibly unique class:

First up was Lori, who pitched a bar focusing on female clientele, with "drinks that cater to a woman's palate, but aren't girly." Her cocktails — such as the Calm Collins: gin blended with a relaxing mix of lavender, lemon and rosemary – sounded delicious, but incredibly expensive considering the suggested 22% pour cost. At $25 per drink, she'll likely only cater to millionaire patrons. Anthony let Lori know that he loved the theme of the bar and the drink names, but pressed her on her pricing. Her cocktail recipes, however, were right on the money. The Ginger Chamomile Flip (rum, ginger, chamomile and spice made creamy with an egg white foam) was a particular hit with the entire class. 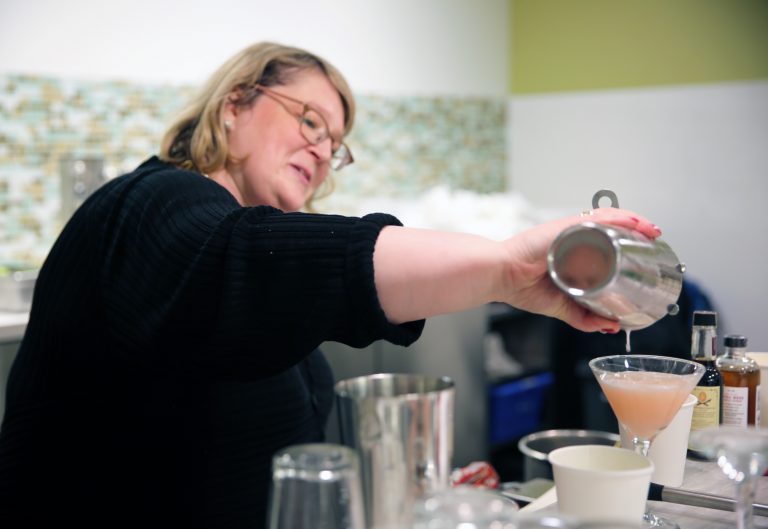 Eric’s goal was to open a bar in Crown Heights with Emily, a friend and fellow student in the class. He managed to keep prices around $12, with takes on three different classics: an Old Fashioned, a Rob Roy and a Negroni. Modeled after an Old Fashioned, his Short Stack — made with rye, maple syrup, Blackstrap molasses, aged bitters and garnished with an orange peel — tasted like a syrupy stack of pancakes. I ordered a Short Stack and Eric asked if I preferred the bitters on top or mixed in.

Emily, in a hushed whisper, suggested that I take them on top for increased aromatics. I took Emily’s recommendation and good thing I did: the nose on the beverage was amazing. Perhaps it was a touch too sweet on the palate but that can easily be adjusted. Considering this was Eric's first time preparing the cocktail in public, I was quite impressed. 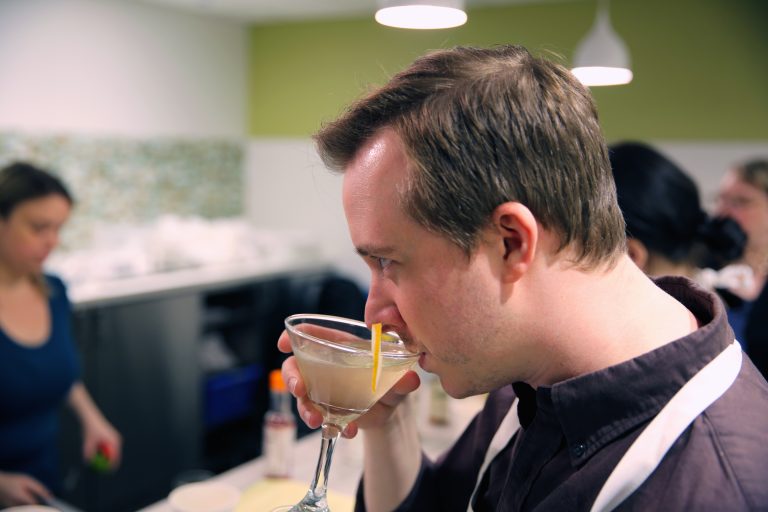 Who needs food when you've got drinks? Neshann really shook things up and did away with a traditional restaurant menu for a "5-course cocktail meal." The journey began with an appetizer in the form of a Scotch-based Cranberry Blood and Sand, and concluded with dessert: Meant To Be, a play on the Grasshopper that incorporates Branca Menta, crème de cacao, Cognac, orange juice and a whole egg.

"This is a great example of building off of an original template," Anthony declared, who seemed to be quite happy with the students' jobs of taking the classics and reconstructing them with their own updated spins. Apparently, Anthony explained, this is the approach taken by many great cocktail bars. Neshann's best cocktail was an ode to the Sidecar called Broken Axle, made with Cognac, Cointreau, maple and just the right balance of ginger.

He explained how he had to be careful with the ginger: A touch too much would "blow it out," he said, underlining the importance of proper ingredient ratios. Anthony was delighted by the sweet, sour and spicy cocktails from the students. "When I judge competitions," he said, "around 60% of drinks are out of balance. I haven't had an out-of-balance drink all night!" 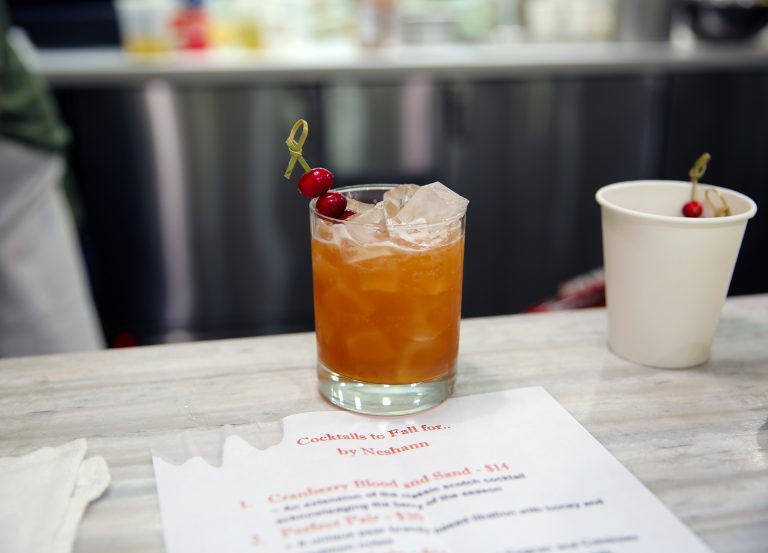 The Ethan Fixell Creativity Award goes to Dennis, a doctor who created an incredibly ambitious "Asian-themed menu" spanning cultures from three different countries. His Korean-themed cocktail was a soju-based kimchi martini. Dennis found that adding fresh fermented cabbage to the glass didn't impart enough to the beverage, so he infused it into the liquor in advance instead, locking in that pickled flavor.

Dennis' Thai homage was a Lemongrass Martini made with the option of lemongrass-infused vodka or gin ("I come prepared," he wryly affirmed) and a kiss of dry vermouth. As a traditionalist (as much as one can be, ordering a lemongrass-infused martini), I opted for the gin version and was far from disappointed. 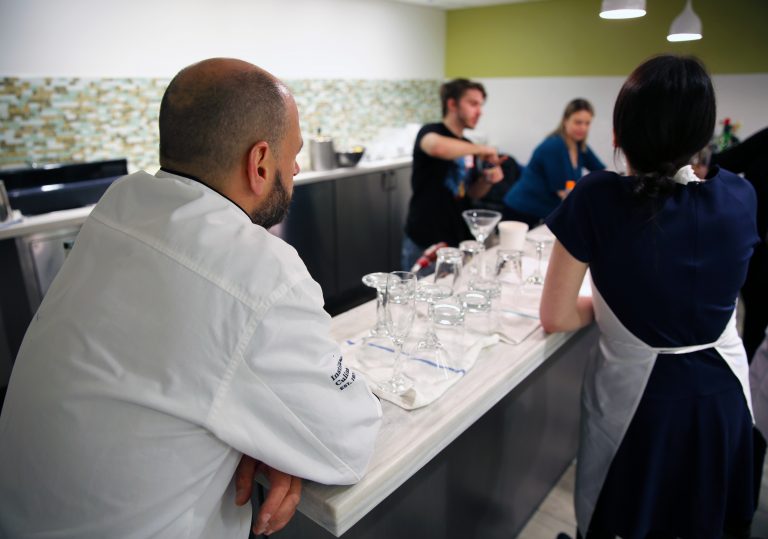 Dennis's pièce de résistance, however, was his Chinese-inspired drink: a Peking Duck Old Fashioned inspired by some bacon-infused bourbon tasted in a previous class. In fact, the concoction — made with duck-juice-infused bourbon topped with angostura bitters — might have been the winner of the entire night.

Ready to craft your own cocktail and learn pro mixology? Click here to check out ICE’s mixology and beverage courses.

Need to brush up on your wine, beer and spirits knowledge? Register today for Ethan's upcoming class, Drinking 101. All photos by Ethan Fixell © 2017.