The chef and co-proprietor of Valencian Gold is sharing his love of Spanish cuisine off-Strip.

Paras Shah (Culinary, ‘07) grew up as a food nerd, but he didn’t think a cooking career could be his reality until enrolling at ICE, gaining invaluable mentors and winning a scholarship to cook in Spain.

The first memory Paras can conjure is of food. “My father came back from temple on a Sunday with Dunkin’ Donuts,” he says. “As a little chunky kid, I always loved the powdered sugar doughnuts. When all the powder fell off my doughnut, I wondered what the heck was on it. I hammered my doughnut with baby powder and proceeded to take a bite. I obviously spit it out and that started my curiosity for food.”

As a child, Paras would search for the greatest shrimp scampi recipe while other kids were playing outside or engaged in video games. He compared the techniques of Julia Child and Jacques Pépin, who he remembers as his heroes. At the time, he felt like he had to keep his culinary interests a secret. “You weren’t a cool kid if you cooked beef bourguignon,” he recalls.

When he graduated high school, Paras didn’t think that cooking could be a lucrative profession, so he went to business school at Bentley University. He had worked in his father’s jewelry store during the summers, so sales seemed like a sensible path. Following graduation in 1999, he jumped around from sales job to sales job for seven years.

During this time, Paras opened La Bella Italian Restaurant with an Italian man from South Africa. “He made me the head cook and I had zero idea what to do in a kitchen,” Paras reflects. “The food was what the food was, but that was my first taste of culinary life.” After a bit, he and the owner had a disagreement and Paras went back to sales. 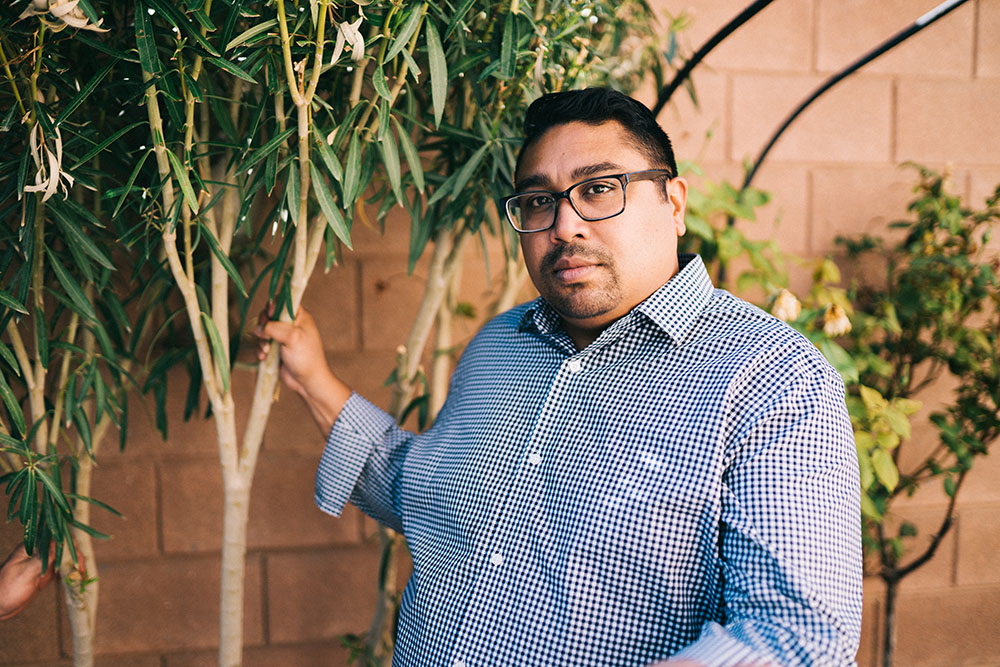 Finally, in February 2007, Paras followed his dream and began the Culinary Arts program at ICE. “I always knew that being behind the stove was going to be the right thing,” he says. “I loved every minute. It just felt right, it felt natural, it felt like this is exactly what I need to be doing.”

At ICE, Paras met his first mentor, Chef Chris Gesualdi, to whom he attributes much of his success. Paras was amazed watching Chef Chris make his famous mashed potatoes, and he learned even more important lessons.

“He taught me how to be a chef,” Paras says. “It wasn’t just about the cooking. It was about how to present yourself, how to be a professional and how to look for efficiency. He took me under his wing, and I really appreciated that.”

Chef Chris, who was Thomas Keller’s first sous chef, recommended Paras for an externship at Per Se. Paras had a successful experience, but there was no open position for him to continue working there. Instead, Jonathan Benno, Per Se’s chef de cuisine at the time, connected Paras with David Chang.

Paras worked at Momofuku Noodle Bar for a year and a half before he won a scholarship to cook in Spain, which he learned about through ICE's job postings. In Spain, he worked as a line cook at Hotel Santo Mauro in Madrid, El Portal de Echaurren in Ezcaray and El Bulli in Roses. “I was the last native New Yorker to walk through those doors and work there,” he says of El Bulli.

Following a formative year abroad, Paras moved back to New York to work at La Fonda del Sol under Josh DeChellis, who he refers to as “one of the sickest cooks I’ve ever met in my life.” Paras spent four years at La Fonda as chef de partie, sous chef and then executive sous chef.

Next, he did a nationwide pop-up tour with Dinner Lab, where he cooked a menu that reflected his Filipino heritage throughout nine cities in nine weeks. Dinner Lab then hired him to be chef de cuisine for its Brooklyn location before Josh DeChellis tapped him to be the executive chef of Kat and Theo. He was in that role for a year and a half before he started working for Barcelona Wine Bar, first in the New Haven location and then for the South Philadelphia location opening. While in Philadelphia, Paras also opened a restaurant called Chez Ben.

It was around this time that Paras’ friend from the scholarship trip, a Californian named Jeffrey Weiss, shared an idea for a fast-casual paella spot, a way to make their now beloved Spanish cuisine available to the masses in a format like Chipotle or Cava. “I told him straight up ‘I’m in,’” Paras says.

When the duo started looking for spaces up and down California and couldn’t find a spot that worked, a friend of theirs told them Las Vegas was on the upswing and that they should come visit. “Jeff and I both were like, ‘No, we don’t want to be on the Strip.’ And our friend recommended off-Strip. We were like, ‘What the heck is off-Strip? What’s out there in the great beyond?’”

Paras and Jeff soon learned that Las Vegas would be a perfect location for their concept. According to Paras, the off-Strip community is becoming more and more vibrant, filled with hospitality industry folks who work on the Strip and know good food. “Our restaurant is in the hub of activity for a lot of the development in Las Vegas,” he says.

The two chefs have been living in the city for more than a year now and opened Valencian Gold in July. With the tagline “paella for the people,” Paras and Jeff aim to make Spanish food accessible, knowing they might be introducing customers to the cuisine for the first time. “We want people to not feel intimidated, to feel comfortable, to come into an environment where they can be themselves, where it’s okay not to know everything because we’ll help them learn it,” says Paras. 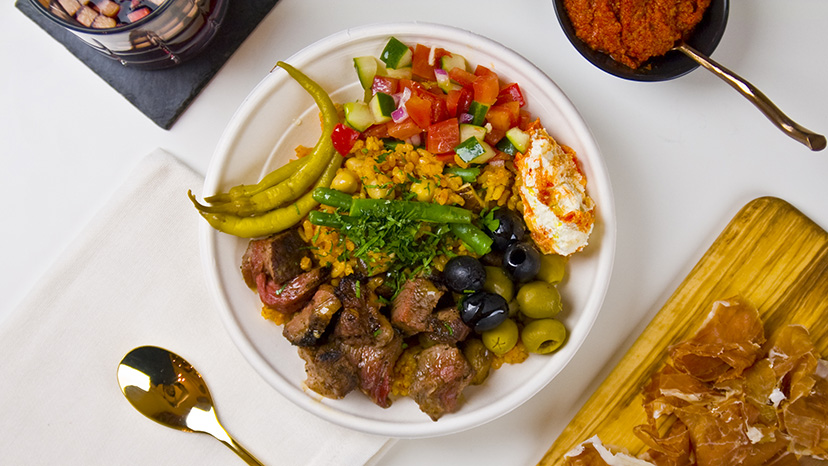 For less than $10, diners can create a custom bowl with one of four paella bases, one of four greens or a mix. Chicken, steak, lamb and shrimp are all grilled protein options, while Spanish ratatouille and an herb bean salad are on offer for vegan guests. There are more than 16 toppings, from crunchy rice and crispy chorizo to pickled onions and diced cucumbers. Dips, dressings and sides, like croquetas and gazpacho, are also available. Plus, agua frescas, non-alcoholic sangria and iced tea are made in-house.

The recipes are reminiscent of what Paras and Jeff learned and cooked during their time in Spain. It’s important to them to stay true to traditional flavors. Paras, who is fluent in Spanish and obsessed with the country’s culture, considers himself a Hispanophile. “I tell people I’m 95% New Yorker, but I’ve got 5% Spanish in me. There’s something about that country and those people. The food is so very compelling to me,” he gushes.

While the food is undeniably Spanish, the interior of the space is influenced by trends here in America. “Nowadays, it’s all about the Instagram generation. We wanted to make something different than your standard fast-casual. We put a lot of thought into being able to take pictures,” Paras explains.

That means they have natural light bulbs for optimal photography, a hand-textured plaster wall created by a local artist and a greenery wall with a neon sign. They also enlisted their friend Xolaka, a Valencian street artist, to paint two murals. “The only place you can see his work outside of Spain is here,” Paras shares.

Friends for more than a decade, Paras and Jeff balance each other out as partners. “I might be more aloof and Jeff will be more grounded. I will be more laid back and Jeff’s more go get ‘em. It’s funny how we get to the same conclusion with different methods. In this crazy, ridiculous ride that we’ve been on to open these doors, it would’ve been difficult if it was just one of us, but knowing that we have each other’s backs, we push forward,” Paras says of the man he considers a brother.

Though the partnership is strong, opening a restaurant always poses challenges. Paras found permitting particularly difficult, as well as handling investors. “Our initial investor didn’t actually make good with what he was promising. We found ourselves in Vegas with an idea and without the funds to make that idea come to fruition.” Thankfully, Paras and Jeff were able to hustle and find new investors.

Through the experience, Paras has found that doing your homework is vital. As a chef, he thinks it’s critical to learn the business end of running a restaurant. “We as chefs tend to stay in our little cave of the kitchen and don’t necessarily venture forth into the front of the house and understand how to really make people happy out there. We’re focused on food, but you need to understand the financing, the food costs, the labor costs and how to read a lease,” he explains.

For current ICE students, he recommends linking up with a professor outside your own program. Culinary students should forge a relationship with a management professor and vice versa so that you understand all the facets of the industry.

“It’s important to create a place where people will want to spend their time, enjoy the food and experience good service,” he says. With positive coverage from Eater Vegas, the Las Vegas Review-Journal and Las Vegas Weekly, it looks like Valencian Gold is just that.

Pursue a dual diploma in Culinary Arts and Restaurant & Culinary Management for the foundation to open your dream restaurant.