When the moon and stars align to combine the two loves of your life—cooking and football—you know everything is ok in the world. This past Saturday, Chef James Briscione and I had the honor of representing our school and the New York Jets, launching the Jets Cooking School: Tailgating Division. The first event, Grilling Boot Camp, was held last Saturday at MetLife Stadium, home to both the Jets and the New York Giants.

Looking out from the main stage at all the eager tailgaters was a complete thrill, only tempered by the 35 mph winds that were busy blowing our mis en place all over the parking lot. It was an experience that proved Jets fans to be a hardy bunch, who didn’t allow the weather to slow them down one bit.

As we started our demonstrations, I was a little worried about executing the menu under such conditions. But against all odds, the students—under the guidance of ICE Chef Instructors—marinated, rubbed, chopped and whisked their way to success. 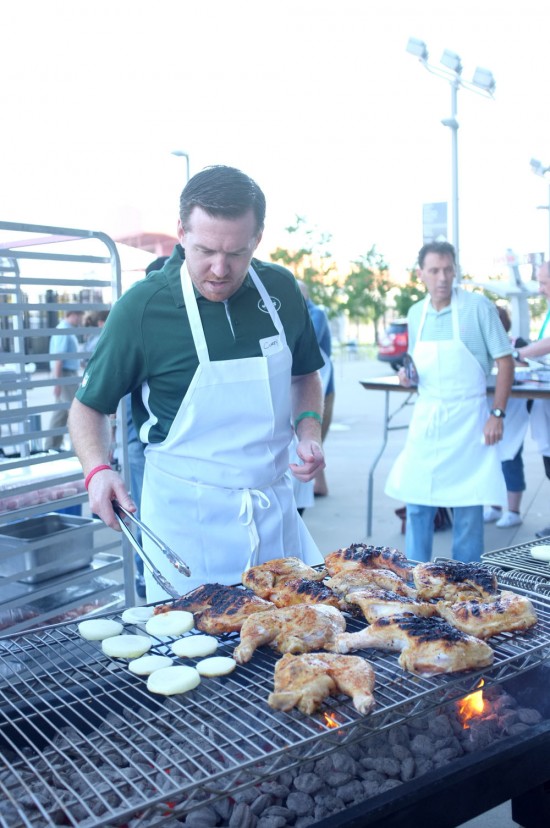 Soon enough, the meat was on the grill, drinks were served and all was moving along just fine. All that was left was to prepare my bourbon banana dessert and grill it while we dug into the main meal.

After hearty helpings of stuffed pork chop, grilled hanger steak, dry-rubbed chicken, grilled Caesar salad and broccoli rabe—and that banana dessert—we were finally ready to tour the stadium. It was at that moment that irony struck, as my wife texted me that my son had gotten hurt during his football game and was on his way to the hospital (he turned out to be fine and will be on the field next weekend). Sadly, that prevented me from taking the tour, which I know was a near-religious experience for many of the fans in attendance.

I can't wait for the Monday night football cooking classes at ICE, as well as our next event at the stadium. Not to mention, we may get a visit from Jets players at future classes. My co-Chef, James Briscione, already gave a personal lesson to Jets offensive guard Willie Colon, which was featured on Fox 5. We both look forward to cooking alongside more players and fans this season. J-E-T-S JETS, JETS, JETS!