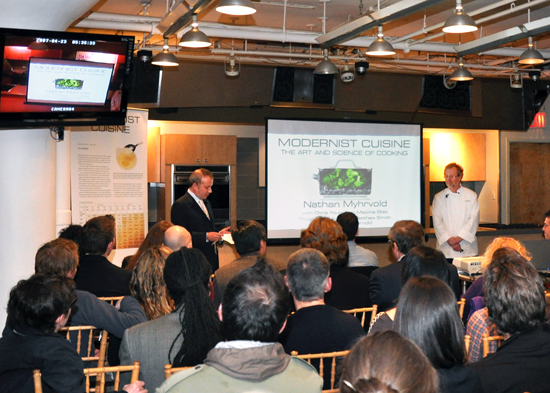 Modernist Cuisine is perhaps the most highly anticipated cookbook ever. Nathan Myhrvold and co-authors Chris Young and Maxime Bilet (an ICE grad) worked with a 20-person team and spent six years creating the six-volume, 2,400-page set that reveals science-inspired techniques for cooking. And last night, the team celebrated the launch of their book at ICE. During their week in New York, the team appeared on the Today show and The Colbert Report and prepared food for events at the Core Club, the New York Academy of Sciences and Jean Georges. The last event in the city was the launch at ICE. In attendance were industry notables such as chefs Marcus Samuelsson, Nate Appleman, Johnny Iuzzini, Paul Liebrandt, Waldy Malouf, as well as food media personalities such as Amanda Hesser, Gail Simmons and many others interested in hearing from the chefs behind the immense project.

Myhrvold, the former Chief Technology Officer of Microsoft, feels that the book represents a revolution in the art of cooking. Ferran Adria has said, "The book will change the way we understand the kitchen.” He shared that there are over 1,150,000 words, 1,522 recipes and 3,216 photos in the completed volumes. While many people assume the book is full of very technical recipes that require expensive equipment, Myhrvold said, “Half the recipes in the book anyone can cook at home.” For example, while his detailed chart for making different types of custard looked confusing, he pointed out that the only ingredients on it were milk and eggs and the only technology required to make it was a thermometer. 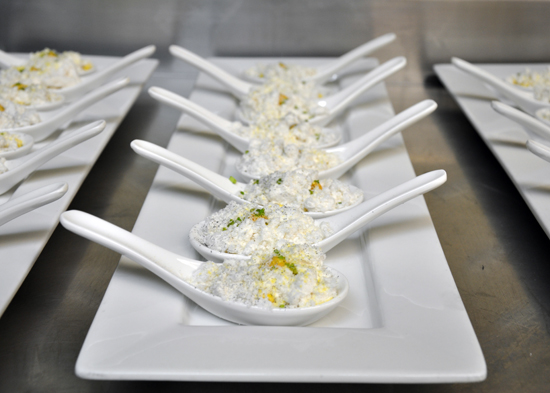 The book’s co-author, ICE alumnus Maxime Bilet (Culinary ’05) lead the effort to prepare a selection of dishes for the evening. The team of chefs from The Cooking Lab teamed up with ICE student volunteers and Chef Instructors Brendan McDermott, Chris Gesualdi and James Briscione to prepare eight different dishes highlighting the different techniques in the book. For example, the Caramelized Carrot Soup was made by pressure-cooking the carrots with baking soda because the higher pH boosts the caramelization process and yields an incredibly intense aroma and flavor. The Oyster Cocktail was prepared by dipping the oysters in liquid nitrogen for 25-30 seconds, freezing the abductor muscle for clean shucking. One of the evening’s hits was Pastrami and Sauerkraut made from short ribs than had been brined, smoked, dry rubbed and then cooked sous-vide at 140ºF for 72 hours. It was an incredible opportunity to learn about the science of cooking and the world’s most modern culinary techniques. We couldn't possibly be prouder of Bilet and the whole Cooking Lab team. 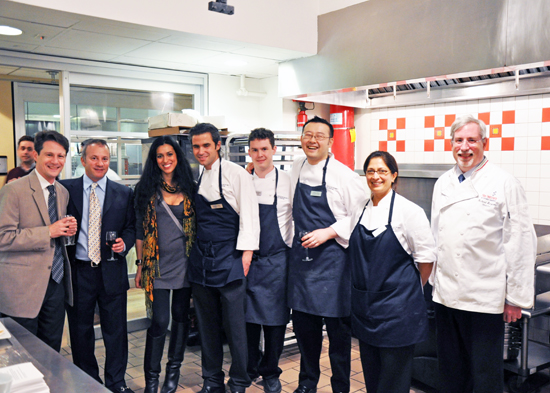