Through our Culinary Management program, ICE offers a unique series of lectures called Meet the Culinary Entrepreneurs, during which a wide range of culinary business leaders and luminaries share their expertise with students and guests. 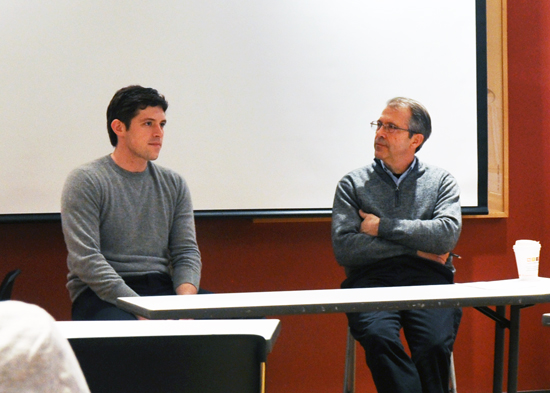 Yesterday, Joe Campanale, the beverage director and co-owner of three successful West Village restaurants, Dell'anima, L'Artusi and Anfora, came to speak to the ICE students about his career and share his advice on starting your own business with them. ICE Culinary Management Instructor Vin McCann moderated the discussion, asking Campanale about learning the business and starting his own restaurants.

Campanale admitted that it wasn’t his plan to get into the restaurant business. He grew up in Queens then attended NYU for a B.A. in European studies. Campanale wanted to be a lawyer and even studied to take the LSATs before turning to a career in food. He decided to pursue an M.A. in food studies at NYU and followed his passion for service by working in restaurants and the wine industry. Now, he holds the Diploma in Wines & Spirits from the Wine and Spirit Education Trust and is a Certified Sommelier from the Court of Master Sommeliers, and is enrolled in the Master of Wine program. For a period, he was the sommelier at Mario Batali’s famed Babbo Ristorante.

Through his career in the wine world, Campanale met his business partners and they would often talk of opening a restaurant. In 2007, they opened Dell’anima after serendipitously finding a space. He said, “We weren’t even looking, but it opened up and we went and saw it. It was a good location at an amazing price, so we went for it.” With Chef Gabe Thompson, they created a small, neighborhood Italian restaurant focusing on quality food and ingredients.

As the restaurant became more and more popular, Campanale and his team looked to expand. Following the success of their first venture, they opened L’Artusi in December 2008 and Anfora in May of 2010. When asked what he thought his strength was, Campanale credited his success to finding a really great team and working with people he could depend on. He admitted that he was not a great general manager when Dell’anima first opened, and that hiring someone else with more experience was a way to help the business and allow him to focus on the beverage side of their operations. He said, “You have to trust the people who know more than you do.”