Yesterday, as part of our Meet the Culinary Entrepreneur series, ICE students were able to learn from Bill Niman, proprietor of BN Ranch and founder of Niman Ranch.

Niman came to speak about his experiences owning and running a successful company and providing naturally raised beef, pork and lamb to consumers and restaurants. Niman consistently earns praise for the quality and taste of his meats and all his animals are raised using traditional husbandry methods, without chemical and drug additives. Niman has spent his life surrounded by food. His parents owned and operated a local grocery store in Minnesota. He remembered driving along country roads with his dad and seeing animals living on the land, contrasting it to modern, industrialized farming he sees today. 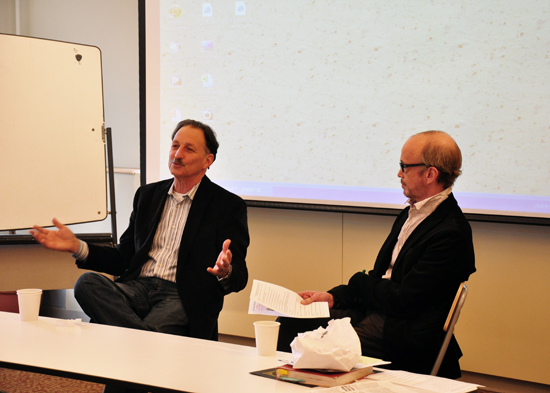 After leaving Minnesota, he found himself living in Bolinas, a small “alternative” community in Northern California. “There was a strong distrust of agribusiness there. We just raised our own food for our family, neighbors and community.” There, Niman started his homestead with a few goats, chickens and pigs. He expanded to cattle and pigs. In the early days, he would trade his neighbors a quarter or side of beef for vegetables. Eventually, Niman’s business grew and he started supplying restaurants in the Bay Area. In fact, the first chef he worked with was Chris Kump, the son of ICE founder Peter Kump.

As his reputation for producing quality meats spread among the food industry, demand for Niman’s meat grew rapidly. He said, “We were a small company that received an inordinate amount of press.” Niman was named “Food Artisan of the Year” by Bon Appétit, the “Master of Meat” by Wine Spectator, the “Guru of Happy Cows” by the Los Angeles Times, “a pioneer of the good meat movement” by the New York Times, the “Steve Jobs of Meat” by Men's Journal and a “Pork Pioneer” by Food & Wine. Niman had to take on more land and start working with a network of like-minded farmers to meet the national demand for his meat. Niman was also a member of the Pew Foundation’s National Commission on Industrial Farm Animal Production.

After visiting industrial farms, Niman decided to spend the rest of life as an animal and food activist. In 2007, he left Niman Ranch to reinvigorate his own homestead and started BN Ranch. There, he is trying to creature a model farm where all the beef is completely pasture-raised and the ranch is environmentally, economically and socially sustainable These days, Niman is excited that people are more concerned about what we eat and more healthy food is available to consumers, saying “There is a great new energy in food.”

ICE’s Meet the Culinary Entrepreneurs is a one-of-a-kind, year-round series of lectures, during which a wide range of successful culinary business leaders and luminaries share their expertise with students and guests. To see upcoming speakers, check out the schedule of career development classes.