Daniel Holzman is the chef and co-owner of The Meatball Shop, the incredibly popular Lower East Side restaurant. 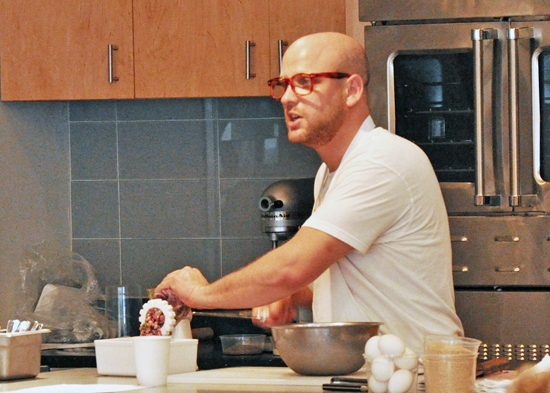 While The Meatball Shop is a casual, neighborhood joint, Holzman started his career at the more prestigious Le Bernardin when he was 15, working in the high-end restaurant after school and on weekends. After culinary school, he began at Jean-Louis Palladin’s Napa restaurant in Las Vegas and spent the next 10 years on a culinary journey through some of California’s finest restaurants, including Campton Place, Fifth Floor, Aqua and Jardinière. In 2007, he opened the critically acclaimed rustic Roman osteria SPQR in San Francisco. In early 2010, Holzman and partner Michael Chernow opened their meatball-centric restaurant on the Lower East Side. (Chernow’s wife, Donna Chernow, is an ICE Pastry & Baking Arts alum and developed the restaurant’s signature mix-and-match ice cream sandwiches.)

Since then, the restaurant has become wildly popular and the duo plans to open a second location in Brooklyn and another in the West Village this summer. Though the menu at his restaurant is based exclusively on meatballs, Holzman’s demo was less singularly focused. Starting with a whole section of lamb, he broke it down and discussed how to get the most meat from the shoulder, shank and neck, including techniques for incorporating lesser cuts and scraps. He even discussed how dry braising the bones left over from butchering makes it easy to pick off the pieces of meat left behind between bones and joints, giving chefs more meat to serve. He prepared a grilled flatbread topped with lamb meat pulled from the shoulder and a yogurt sauce, a delicious way to use meat that may otherwise go to waste. Of course, he did not neglect the meatballs the restaurant is known for and made a Mediterranean lamb meatball with walnuts, raisins, mint and parsley.

According to Chernow, one of the secrets to a great meatball is grinding your own meat. Chernow brought with him the same $24 grinder he used to develop all the restaurant’s recipes. By grinding the meat himself, Chernow is able to carefully choose where the meat is coming from and carefully select what cuts he wants to use so he has more control over the ratio of meat to fat. For example, for the lamb meatballs, he added some pork fat into the grind for a mouth feel. Chernow also included the nuts, raisins and herbs in the grind so that there would be less mixing needed after grinding, decreasing the chance of creating a mealy texture by over mixing. His biggest tip was to “always cook and taste a test patty first. It is much better to realize you forgot the salt before you formed hundreds of meatballs.”