Back to Basics: A Full Side of Beef

On Wednesday afternoon, we were lucky enough to see half of an entire steer from the ceiling in ICE’s demo kitchen. Weighing in at 347 pounds, the side of beef was a chance for ICE students to learn not only the art of butchery but also to gain a better understanding of the different cuts of beef they work with in the kitchen. 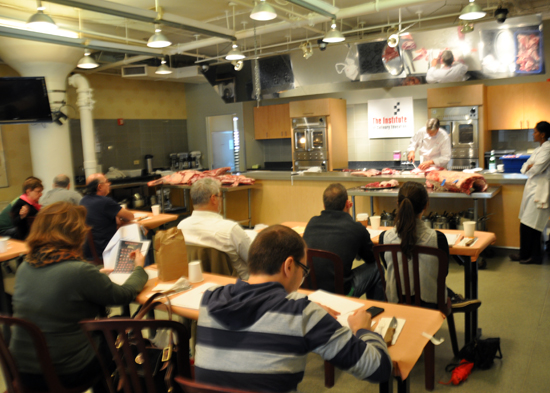 Master Butcher Rudi Weid lead the demonstration and deftly broke the meat down into primals, sub-primals and ultimately into roasts, steaks, ribs and other familiar cuts of meat. Chef Rudi discussed every section, cut, muscle and the different uses for each as he worked his way through the steer.

Chef Rudi led the culinary class through the process of butchering a steer as well as the different classifications of meat and applicable terminology. Using his razor-sharp knives, he worked his way up the steer, starting at the neck and working all the way to the back leg. He demonstrated where exactly cuts such as silver tip, eye round steak, tri-tip, top loin steak, short ribs and chuck pot roast come from — tying together what we are used to seeing in the store with where it comes from on the animal.

We also learned about the different levels of quality, as defined by the USDA. The steer Chef Rudi worked with yesterday was classified as USDA Choice, the USDA’s second-highest quality designation after Prime. Choice is the label applied to beef that has less marbling than Prime cuts, but more than any of the remaining six lower-quality grade designations of Select, Standard, Commercial, Utility, Cutter, and Canner.

Eventually, the various steaks were seared to perfection with a dark caramelized exterior and a beautiful pink interior and served so the class could sample and directly compare the different cuts. While all the cuts were tasty and juicy, comparing them side by side was an illuminating way to see the differences in texture and flavor of the different parts of the steer, especially after seeing where it all came from. 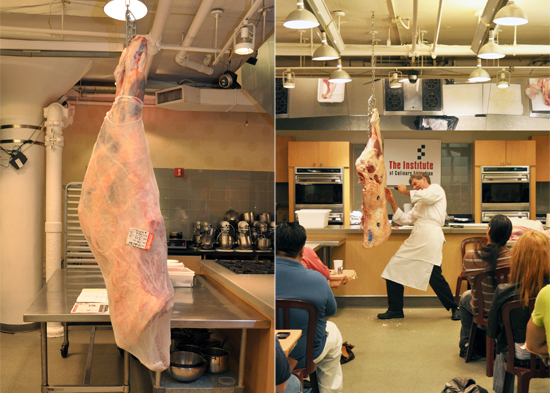