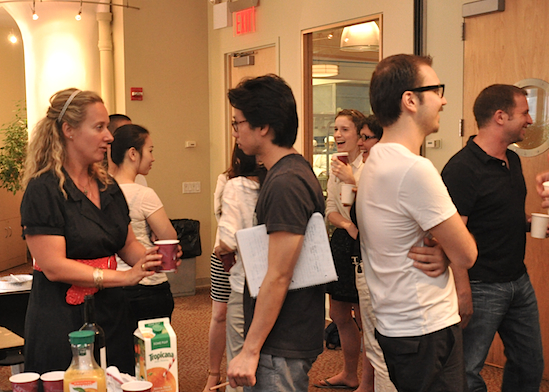 While, in my previous school experience, summer break meant at least two months off, this time, it means the first week of July off. Beggars can’t be choosers, right?

We’ve been doing so much in school, I could definitely use some time to catch up on something I call sleep. In the past few weeks, we learned about financing a restaurant and setting up the corporate structure. When Simon and I opened up Macaron Parlour, I felt like I looked through hundreds of descriptions of corporate structures and was still confused.

For example, why open as an LLC when we have to determine what other corporate structure we want to be taxed as? What is an S-Corp? I’m not going to lie, it’s still a little confusing, but I’m glad we covered it in class. ICE alum Jason Apfelbaum from Chef & Co. also stopped by to chat. He said that a single class speaker who came in 1998 to speak to his culinary management class influenced him so much, his dream expanded from buying a small hotel to starting a catering business out of his apartment.

That business eventually became Chef & Co and from there, Jason has been all over the place — from opening Cibo Expresses in Delta airports, to being a partner in Guerilla Culinary Brigade and opening pop-up restaurants. He is a prime example of how expansive the food industry is. We’ve also been getting into numbers. Probably one of the more dreaded portions of the program, yet the most necessary. We got into discussions about the importance of actually writing down recipes (an absolute must when it comes to the pastry world), food costs, ordering, inventory checks, etc. I thought I had nailed down food costs for Macaron Parlour two months ago, but the price of almond flour went up 20% so that affected our food cost, and ultimately our profit. This led to a conversation with our vendor and other vendors to see what’s going on and why the price was affected. If the price keeps going up, then it’ll be reflected in our price to our consumers, or we’re going to have to change the size of the macarons. This is something I’ve always been aware of, but this class has stressed the importance of keeping on top of your food costs!

In addition, we finally had a chance to put our concepts down on paper. I’ve had an idea I was toying with for a while, but actually writing it down was different. For every idea I wrote down, I thought about alternatives, so I had to ask myself why chose to do one thing and not another. I thought about things like where I would like to be, what the hours were like, what my menu looked like, who I hoped to target and other things I never really formed concrete thoughts about while my concept was just rattling around in my mind. Not only did we write our concepts, we presented it to the class to get feedback. We were able to tell each other some of our half-baked ideas and ask our classmates for their thoughts — many of which helped us complete our concepts.

We got feedback on whether our business idea made sense or what we would have to do in order to make it more profitable. This was followed with a visit from Clark Wolf, who reiterated the importance of having sizzle in your business. He spoke about his experience at a cheese shop he opened where he used window displays and signage to get customers in the door. He also went around the classroom and had all of the students write a mission statement for their business. I personally struggle with the mission statement because it’s so hard for me to figure out how to take one big idea with all these different parts to it and consolidate it into two sentences. Fortunately, I passed Mr. Wolf’s standards and he approved of my statement.

Then, we topped everything off with a party. Our last day of class before the July 4 break, the students from both morning management classes joined together to celebrate our hard work and mingle. Each student brought in something and Simon showed up fashionably late (20 minutes into the party) with 50 macarons. After two and a half months of talking about macarons, it was great to finally share them with my classmates. Well, now it’s back to my summer break. This week isn’t just a week off from school. In the food world, so many people are on their own vacations that the restaurant industry is slower than usual. It’s a break for all!