The past two weeks have been all about visiting guests and field trips. 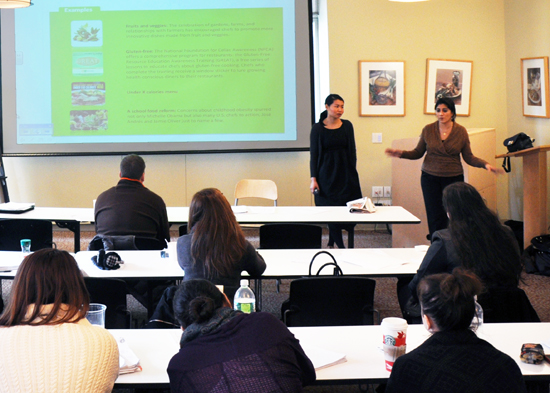 I remember that as an undergraduate, guests and trips were rare. In fact, I remember loathing trips because they involved awkward subway and bus transfers and getting shuffled around museums like a crowd of tourist sheep. I could never hear the teacher talk and I was always getting elbowed by some sightseer trying to inch closer and worse, I would end up in the corner of their photographs, looking sullen about having to wake up early for the trip. But fortunately, this was different. Jasmine Dadlani and an associate visited us from Cramer-Krasselt marketing and communications agency to talk about current food trends. They discussed the underlying trends and what drives them, such as pop-up restaurants and using guerilla-marketing tactics like Twitter to drive customers to your business. It was very interesting to get the professional perspective behind things I have been noticing in the food industry!

Next, Vin McCann came in to talk about leases and costs. His work history ranges from turning real estate into international franchises and opening a small hotel in the Adirondacks. He has experience in all aspects of the field from catering and quick service to fine dining and consulting. He spoke about what makes a good location for pedestrian traffic, vehicular traffic, and about judging the competition and market health in an area. I asked about whether my hometown would be a good place to open a bakery and his answer was probably not! Good thing it was no more than an idea.

Last week, we paired up with another Culinary Management class (and Vin) and visited Peter Esmond, the Director of Operations at Rouge Tomate. We took a single train from 23rd to 60th and walked less than 2 blocks (score!). Like true VIPs, we walked in during their pre-opening hours and had a quiet private tour of the space and the kitchen (no elbowing involved). This time, I got to take a tourist photo with Peter as the centerpiece and Steve standing in the corner. Already, it was better than any other field trip I have ever taken. Peter spoke about how the economy tanked after Rouge Tomate opened and how within the first few months, the restaurant went from being two stories to one floor with an event space, and the prix fixe menu was changed to an à la carte menu. He spoke about the mentality of consumers after the demise of Lehman Brother’s and tied it into how it affected the restaurant. He was very candid about his experiences and very open to answering questions with us.

We also did another field trip, which was actually more like a field study. We split into groups and trekked to different parts of the city to study the foot traffic patterns and design a concept that fit the area. My group had 29th Street and 6th Avenue. We found a lot of commuters, a lot of police cars and no places to get sweets so we came up with an idea for a donut shop! It would cater to the commuters on their way to work and satisfy the cravings of those who live in the many residences in the area. We came up with our opening market strategy, discussed rent per square foot, payroll and how much we expect to make at the end of the year (not much!). Actually standing outside and counting people and determining who wants what was a very interesting field study and a great way to apply our classroom learning.

Overall, it was a busy few weeks. In Macaron Parlour world, the Hester Street Fair opens this Saturday so we have been baking nonstop to mark the start of the outdoor market season. Since the last post, there has also been the Royal Wedding and the news about Osama Bin Laden. President Obama even drove by Locanda Verde and waved at the patrons — twice. It has been very busy and festive all around! While there are a few more guest lectures and trips on the way, we’re about to get really serious and talk about safety and sanitation in the classroom as we gear up for our SafeServ test in a month!