These hyper-realistic cake designs are famous on TikTok and beyond.

Born and raised in Seoul, South Korea, Inae Tirado (Pastry, '13) displayed an aptitude for art at an early age. This led her to a brief stint studying architecture and a few years as a fashion consultant at Gucci before she moved to the United States to learn English. It wasn’t until she watched “Cake Boss” for the first time that she explored the possibility of expressing her creativity through baking. Now, her mind-blowing, hyper-realistic cakes are a TikTok sensation.

“When I was about 8-years-old, my mom enrolled me in art classes because I had such an interest in drawing things,” Inae recalls. “It was actually easy for me and I enjoyed it very much. I continued to sketch and design as a teenager.”

Inae chose to move to New York to attend language school because of the city’s prominence in the fashion industry. She began English classes when she arrived and met her future husband soon thereafter. Three years later, they married, and the couple’s television consumption is to thank for Inae’s culinary career path.

“I was watching TV with my husband and we started this show called ‘Cake Boss,’” Inae explains. “I started reading about this fondant trend because it wasn’t that popular back then.” The couple visited “Cake Boss” star Buddy Valastro's cake shop, Carlo's Bakery in New Jersey, and Inae was in awe. Immediately, she began to research culinary schools.

On her quest, she discovered a birthday cake decorating class at ICE and signed up. “I was so impressed after attending the class, and I fell in love with the entirety of making and designing cakes,” she muses. “That’s how I decided to go to ICE. I loved the school and the environment and everything was so awesome.”

Inae enrolled in the Pastry & Baking Arts program and was instantly enamored. “School was a whole new experience,” she says. “The equipment was beautiful and the instructors were magnificent. I was just amazed at the effort they put into teaching students. Their personalities made everything very comfortable.”

Baking and creating pastries were also enlightening for Inae. “It was like magic, adding ingredients and things coming to life and actually tasting good,” she says.

On graduation day, Inae was awarded the Top Toque title, an honor for excellence in technique, professionalism and industry preparedness. “The chef told me that I would be a better chef than he is, which was such a compliment. He told me I would be famous one day and I believed it. I was nobody, but I’ve come so far and I still think of that,” Inae reflects.

After an externship at New York City bakery A White Cake, Inae secured a position as a cake decorator at BCakeNY in Brooklyn's Prospect Heights neighborhood. For the past seven years, she has been crafting elaborate, multi-layer wedding cakes, as well as celebration cakes for special clients. “I used to make a lot of cakes for celebrities like Cardi B or Jay-Z,” Inae reveals. “Our cake studio was close to the Barclays Center, so we had a lot of celebrity cake orders and I used to decorate all the fancy cakes.”

When the pandemic hit, BCakeNY temporarily closed to protect staff and customers. Inae was suddenly spending 24 hours a day at home and needed a way to fill her newfound spare time. Her curiosity about cake interiors led her to a novel activity. “As a cake decorator, you don’t really get to see the cutting part,” she explains. “I would make beautiful, seven-tier wedding cakes and 3-D sculpted cakes all the time and I wouldn’t get to see them be sliced. When COVID-19 happened, I started to make these weird cakes, and I just wanted to slice them to see how they looked.”

What began as a quarantine hobby quickly turned into a booming business. Inae’s “weird” cakes are incredible, hyper-realistic creations that resemble objects like bars of soap, a scented candle or a banana. So when she began to record and share videos of her slicing in action, millions of people could suddenly experience the jaw-dropping moment when everyday items were revealed to be made of cake.

“I started to post it on social media and overnight it got blown up,” Inae says. “It was overwhelming because I had like 20 followers back then and all of a sudden I had 100,000 on my TikTok account.” Her Instagram profile, @inaecakes, has also become popular, and she has been contacted by newspapers and companies worldwide to inquire about custom cakes. It’s no surprise that orders have been flowing in through her website. 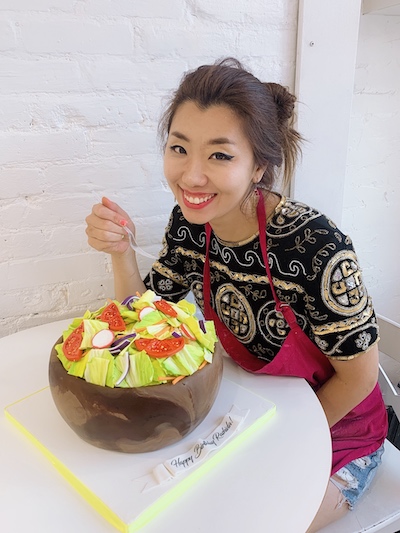 Inae is now extremely busy fulfilling orders, and she’s doing it all on her own with occasional dishwashing help from her husband. She’s baking her awe-inspiring cakes in a commercial kitchen in Long Island City, as she hunts for a storefront location for her new company. Inae hopes to hire an employee to handle marketing and social media once her shop is up and running.

With viral cakes that appear to be items like an Amazon Echo Dot or the bloody rock from the film "Parasite" added to her repertoire, it’s clear that there is nothing Inae can’t make out of cake. Her plan is to continue pushing herself and baking phenomenal cakes for others.

“My ultimate goal is to share my talent with people,” says Inae. “Nothing is more satisfying than seeing people’s faces when they’re amazed by my art that I have created. It makes it all worth it. I’m very simple. I don’t follow money — maybe I should at this point — but I do what I love. Money follows after. I love what I do.”

Love what you do with a certificate in The Art of Cake Decorating or a diploma in Pastry & Baking Arts at ICE.