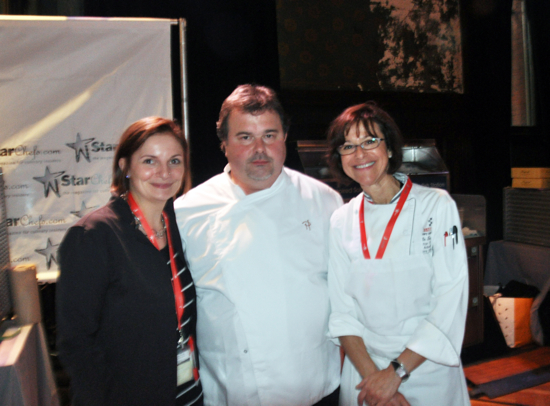 Over 3,000 savory chefs, pastry chefs, restaurant managers, sommeliers and other industry professionals gathered at The Park Avenue Armory for the three-day conference packed with demonstrations, workshops, panels and seminars on current industry topics. This year’s theme, “the sixth sense,” explored the role of intuition, emotion, and experience in dining. ICE was the official culinary school partner this year and the breadth and depth of our involvement was an incredible experience for everyone involved. Over the three days, at least 90 ICE students, 10 ICE Chef Instructors, and 15 ICE staff members participated in the conference. 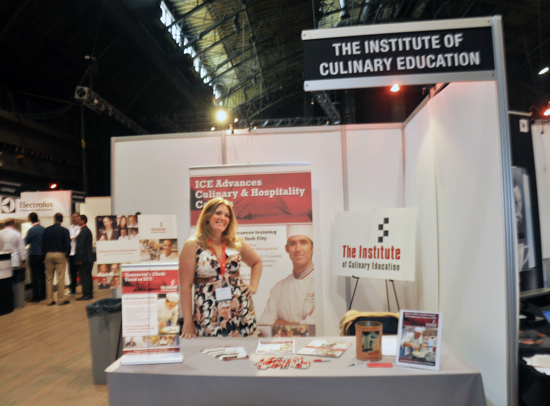 One of the highlights of the congress is a series of in-depth workshops with famed chefs from across the world demonstrating their unique techniques, recipes or approach to cuisine. ICE Chef Instructors Chris Gesualdi, Gerri Sarnataro, Erica Wides, Sabrina Sexton, Ted Siegel, James Briscione, Michelle Tampakis, Chad Pagano and Hervé Riou all acted as workshop coordinators working closely with chefs in the weeks before the congress to develop and prepare food for 25 hands-on workshops on topics centered around this year’s theme. For example,

The ICE chefs’ experience as educators helped inform the workshops style and presentation so that all in attendance were able to learn from the incredible chefs there to share their knowledge.

On the main stage, ICE students, chefs and staff were able to attend unique, impressive demonstrations and lectures from some of the industry’s leading professionals including Grant Achatz of Alinea and Next in Chicago, Elizabeth Falkner of Orson in San Francisco and Kim Severson of The New York Times. Famed Paris pastry chef Pierre Hermé gave a presentation called “Emotions to Share: A Total Immersion in Sensations in Pleasure” during which he prepared two desserts assembled in a serving dish and designed to be experiential when eaten. He paid special attention to texture and flavor in these dishes, combining elements in unexpected ways. For the first, Hermé paired strawberries with tomatoes and olives and in the second he paired wasabi and grapefruit. ICE Center for Food Media Director Anne E. McBride acted as a translator for Hermé, helping to interpret both his main stage demonstration and interactive workshop into English from French and helping to explain the more esoteric elements of his presentations.

Chef Michelle also lent her expertise and experience as a pastry chef living with celiac disease and gluten-free dining in a professional setting to a business seminar titled “Real Food for Health: Feeding Guests on Restrictive Diets.” Also on the panel were writer and blogger Shauna Ahern and her husband Daniel Ahern of Gluten-Free Girl and the Chefas well as Abe & Arthur’s chef Franklin Becker whose son has a restricted diet due to autism. It was an incredible chance for chefs to learn from professionals with real-life experience about how they can make their restaurants more accessible to those with restrictive diets.

The StarChefs.com congress includes a trade show filled with exhibits from some of the industry’s leading providers of equipment, supplies and ingredients. This year, ICE had its own booth staffed by the ICE Career Services team working to network with chefs for our students and alumni. For all of the events at the congress, ICE Director of Student Affairs Andy Gold coordinated an incredible team of over 90 ICE student volunteers who worked from the early morning into the evening to help make sure the chefs and presenters had everything they needed. Students could be seen helping in the workshops or on the main stage, cooking and prepping at evening events, and all of the other exciting happenings during the congress. ICE student volunteers were able to gain new real-world experience and rub shoulders with the chefs and professionals at the Congress.

Another one of the highlights of the congress was the second annual StarChefs.com International Pastry Competition with Executive Pastry Chef Johnny Iuzzini of Jean Georges and Top Chef: Just Desserts. The roster of judges included Pierre Hermé, David Burke, François Payard, Claudia Fleming (an ICE alum), Elizabeth Falkner, Ron Paprocki, Curtis Duffy and Jeffery Steingarten. Competing were up-and-coming patry chefs Bettina Clair of Blue Hill Tavern, Christina Kaelberer of Market by Jean Georges, Vera Tong of Buddakan and Jennifer Yee of SHO Shaun Hergatt, among others. There was a separate round of competition every day of the congress until Ramon Perez of Comme Ça in West Hollywood took home the prize of three days of classes at the Cacao Barry Training Center and a $5,000 voucher for Bravo cooking equipment.

Each of the chefs prepared a dish for tasting. For example, McCoy made Raspberry-Pistachio Clafoutis, Lavender Ice Cream, and Pistachio Nougatine. Sterling prepared Caprino Gnocchi with Brussel Sprouts and Speck. Robitschek mixed a drink called English Heat made of Beefeater London Dry Gin, Dolin Dry Vermouth de Chambéry, Tuaca, Jalapeno-Infused Agave, and lemon. All in all, it was a delicious ending to an extraordinary three days for the food community. The StarChefs.com International Chefs Congress was certainly a memorable event for all of the ICE students, chefs and staff who were able to participate. We’ve already marked the dates for next year!