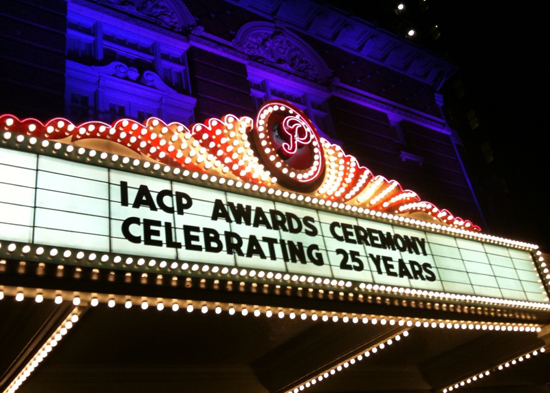 Last night, the International Association of Culinary Professionals (IACP) hosted their annual awards as part of the professional organization’s 33rd annual conference in Austin, TX. This year, ICE President and CEO Rick Smilow took home the award for Entrepreneur or Business Person of the Year to recognize how he has contributed to the growth of ICE since acquiring the school in 1995. ICE was established in 1975 by Peter Kump, but Smilow has been leading the school since 1995. Since then, Smilow has taken what was Peter Kump’s New York Cooking School and guided it to become the award-winning culinary school that is known today as ICE. ICE’s facility has expanded four times and changed the school’s name to reflect our growth during his over 15 years at the helm.

Under Smilow, the school’s professional programs have significantly developed and grown and numerous alumni of the school have won awards from the James Beard Foundation, Food & Wine and the American Culinary Federation. In 2008, ICE won the IACP Award of Excellence in the Vocational Cooking School category, after previously winning in the Avocational Cooking School of the Year award in 2003. And in 2006, ICE was named a National School of Distinction by its accrediting agency, ACCSC. It was under Smilow that ICE launched our Culinary Management and Hospitality Management programs, and our recreational culinary classes and private cooking parties have grown to become the largest of their type in the nation. The award was bestowed to Smilow not only for his work at ICE, but also for his contribution to the culinary industry. Beyond ICE, Smilow is also the author of Culinary Careers: How to Get Your Dream Job in Food.

In 2004, Smilow was chosen as the annual honoree of The New York Association of Culinary Professionals, joining a list of culinary leaders that includes James Beard, Julia Child, and Craig Claiborne. For many years, Smilow has served as a board member for Careers through Culinary Arts Program (C-CAP) and City Harvest and on the Advisory Board of Action Against Hunger. He is often turned to as an expert in the food industry and has been profiled or quoted in USA Today, The New York Times, Crain’s New York Business, Martha Stewart Radio, The Boston Globe, CNN.com,Forbes.com, New York Restaurant Insider, Total Food Service and the Associated Press. ICE is extremely proud to be among the select few to win at the IACP awards, widely regarded as one of the most prestigious in the industry.

The IACP Awards of Excellence honor leaders in the culinary field who have demonstrated exceptional achievement, leadership, and expertise. Past honorees have included such notable culinarians and companies as Rick Bayless, Judith Jones, Nora Pouillon and Whole Foods Market, as well as many others who have demonstrated exceptional leadership and expertise over the years. In addition to the Awards of Excellence, this year marked the 25th anniversary of the IACP Cookbook Awards to honor excellence in cookbook writing. ICE Master Cake Decorator and Chef Instructor Toba Garrett took home an award for her book, Wedding Cake Art and Design, beating out the Essentials of Nutrition for Chefs and Bromberg Bros. Blue Ribbon Cookbook to win in the Professional Kitchen category. We’ll be sure to report more on the ceremony and the awards next week!