ICE at the James Beard Awards

The past two days have hit a high in the culinary calendar for 2010, the James Beard Awards.

The James Beard Foundation was created by ICE founder, Peter Kump and ICE is proud to maintain close ties to the foundation and their hard work to promote and celebrate food in America. This year marked the 20th anniversary of their annual awards ceremony, which have come to be regarded as the most prestigious awards in the culinary industry, often referred to as the “Oscars” of food. The awards ceremonies and festivities are split over two days when the entire food world gathers in NYC. On Sunday night, the foundation held their Media & Book Awards where ICE Alum Dominique Andrews and Marie Ostrosky were nominees in the Television Special category. The very best in food media were honored during this first night of festivities and ICE is proud of the graduates recognized by the foundation. 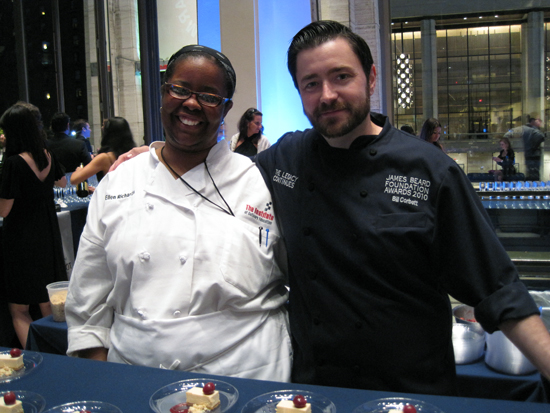 Then last night, the restaurant and chef awards were handed out at Lincoln Center. Everyone and anyone from the food world came to see who would take home the prized medals. The red carpet included luminaries such as Thomas Keller, Dan Barber, Mario Batali, Gail Simmons, Tom Colicchio (a winner for Outstanding Chef), Jacques Pepin, Daniel Boulud (a winner for Outstanding Restaurant) and more names than we can possibly list here. The ceremony was hosted by Lidia Bastianich, Alton Brown and Wolfgang Puck (the first ever Outstanding Chef winner). They handed out awards to the best chefs and most outstanding restaurants in the country. A highlight of the ceremony was when the Lifetime Achievement Award was given to Michael and Ariane Batterberry, the founders of Food & Wine and Food Arts magazines.

They have long stood at the forefront of food and the crowd was thrilled to see them recognized.  The theme of the night was “The Legacy Continues” and in that vein past Outstanding Chef Award winners selected chefs they had mentored to cook for the gala reception after the medals had been handed out. ICE Alumni Gina DePalma (last year’s Outstanding Pastry Chef) selected Bill Corbett, pastry chef at Coi in San Francisco, to carry on the legacy of American pastry chefs. He made an innovative roasted white chocolate mousse (yes, roasted white chocolate) with poached cherries. Student volunteers from ICE worked alongside the chefs to prepare the delicious food. Other treats included Champagne-Poached Prawns from Mark Franz of Farallon Restaurant in San Francisco, Duck Pastrami from Eric Klein of Spago in Las Vegas and Sweet Chile–Crab Dumplings from Cedric Vongerichten (son of Jean-Georges) of Perry St. in NYC.

The revelry didn’t stop there. Around 11 p.m., the crowd started making its way to the various after-parties around the city. The food cognoscenti could be spotted dancing the night away at Ma Pêche (where guests snacked on pork rinds and drank beer from a keg), Eleven Madison Park (where Best Chef: New York winner Daniel Humm and Daniel Boulud ganged up to spray the crowd with Champagne), Marea (a winner for Best New Restaurant) and Bar Boulud. We didn’t make it home till well past midnight. We can’t wait for next year.  Who says you can’t love what you do, then eat it? To find out more about the James Beard Foundation, check out their blog, Delights & Prejudices and follow them on Facebook and Twitter.