When Michael Laiskonis got hired for his first job, scooping ice cream in Detroit, he probably never imagined that he would one day be teaching ICE Pastry & Baking students about the complex chemistry of frozen dairy products. In fact, Michael never intended to enter the food industry. Rather, he fell into it by accident, after deciding to abandon formal studies in fine arts and photography for what he describes as an "earn while you learn" approach. And so he entered the business, working the overnight shift at his roommate's brother's bakery.

Soon enough, Michael discovered he had a certain talent for pastry and wanted to find a more structured environment to further his skills. He found it in Emily's, a small kitchen with only four chefs. Starting out as a savory cook, Michael gradually absorbed more and more pastry duties, proving his merit until his boss agreed to make him the full-time pastry chef — the first time he would see his name on a restaurant menu.

In 1996, Michael moved to Tribute, starting as a line cook and moving up the ranks until he was again named pastry chef in 1999. The restaurant was at the epicenter of Detroit's culinary scene, named one of the nation's best by the New York Times in 2002. In 2003, it became one of only two Detroit restaurants to have garnered a coveted James Beard Award.

But by 2004, Michael was looking to test his hand in one of the nation's culinary capitals, and was referred by a friend to Chef Eric Ripert. After a single 90-minute meeting, Ripert offered Chef Michael the chance to come on as executive chef of renowned New York institution, Le Bernardin.

Making a move to Le Bernardin was no small feat. Michael's predecessors included one of his idols, François Payard, as well as acclaimed chefs Florian Bellanger, Herve Poussot and Oscar Palacios. But over the next eight years, Michael more than proved his talent, helping the restaurant earn three Michelin stars and four stars from the New York Times. Celebrated for his use of modern techniques to reinvent classic desserts, Michael was also awarded the coveted James Beard Award for Outstanding Pastry Chef in 2007.

In 2012, Michael joined the Institute of Culinary Education as our first creative director. "After a successful 20 years in some amazing kitchens," Michael explains, "I'd earned a lot of opportunities — and I chose to join the team at ICE. I have always admired ICE, and education is the perfect opportunity for me to give back, to inspire the next generation of chefs to enjoy and excel in a career in culinary or pastry arts."

He has already instrumented significant progress in our kitchens, providing pastry students with a more in-depth look at the science of their craft, and teaching a number of both public seminars and advanced pastry classes in our School of Professional Development.

Looking back on his career, Michael notes that his path was most unusual in that he stayed in nearly every position for more than five years. He recommends that young chefs only move on to a new position if they feel that they have taken everything they possibly could from that position (including what not to do moving forward). 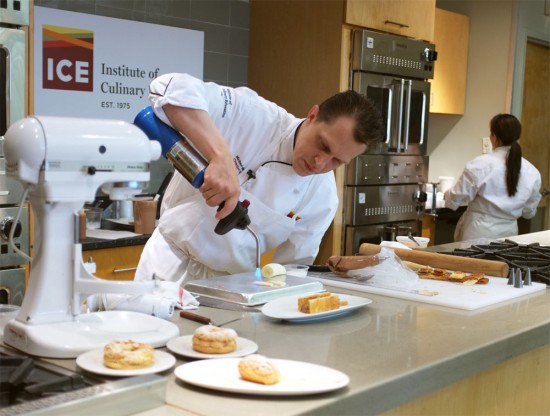 In large part, he credits Chef Takashi from Tribute for establishing his belief in never making a lateral or inferior move, in only moving on if it's a step up. As for how to judge when it's time to move on, Michael says, "The day you go into work without a pit in your stomach is the day you start looking for a new job."

It's this sense of curiosity and constant pursuit of furthering his own education that has kept Michael at the forefront of his industry. Outside of the rigorous constraints of a restaurant schedule, teaching has provided Michael with the ability to work on innovative research projects and to pursue his lifelong interest in the arts, film, reading and writing. (To date, he has contributed to publications including Gourmet, Saveur, The Atlantic and a range of professional pastry journals.)

Whether in his public demonstrations, writing or other creative endeavors, it's clear that Michael has developed a newfound appreciation for teaching. After learning so much from others, he insists, "You don't keep secrets. You have to share."