ICE Cook for a Day: Essentials of Indian Cooking with Shiv of Pithy and Cleaver

ICE offers one of the country’s largest recreational cooking programs. With over 1,500 cooking classes and over 22,000 students each year, there is something for every cook looking to learn new techniques in the kitchen. This month, Shiv of the blog Pithy and Cleaver braved a torrential downpour to try a class on Essentials of Indian Cooking. 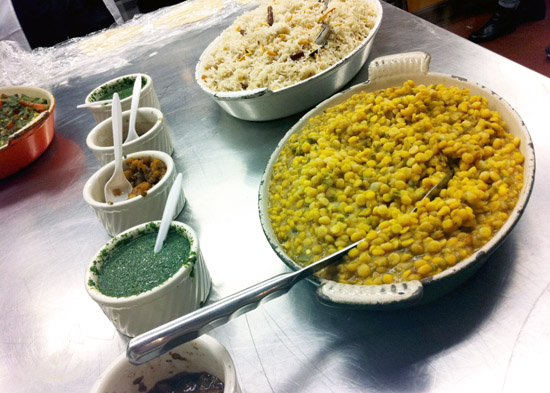 Luckily, the dishes she made and the skills she learned helped compensate for the bad weather. It was a dark and stormy evening. No, really. It was. Seriously. And it’s important for you to understand just HOW dark and stormy it was in order to get some context here. It was day two of what has now been revealed to have been a record-breaking rainstorm here in NYC, the kind of rain that destroys subway lines, makes umbrellas cower in fear, and makes one Shiv distinctly disinclined to leave her bed. It was the kind of afternoon that makes a girl think very seriously about blowing off any obligations to the outside world, even if those obligations include something she really, really, REALLY wants to do.

Such as taking a class in Indian cooking. Indian cookery is something I’d wanted to try my hand at for some time; an exotic fascination that I had, quite frankly, been too chicken to try without supervision. I kept hearing horror stories about how complicated and slow it was, how you had to have at least an entire day and an Indian grandmother of your very own in order to do it right. I knew that if I was going to try it at all, it was going to have to be under the tutelage of a skilled professional. Which is why I did, eventually, manage to drag my sorry self out of bed on this most horrid of days, brave the F train and show up at class. Also, lose my umbrella, but that is a story for another time. 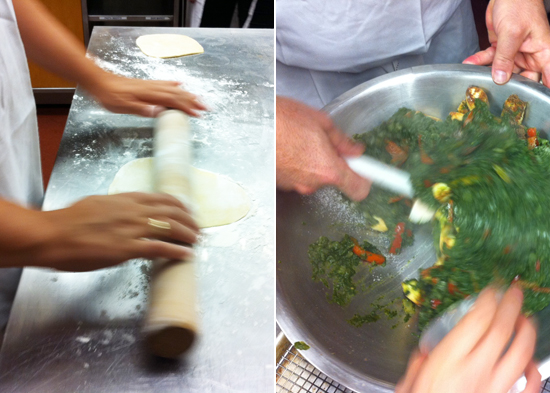 And I am so glad that I did; I’m reasonably sure that the thirteen other people in my class were, as well. Under the watchful eye of our instructor, we somehow managed to go from zero to a full Indian feast in just under three hours (even without an Indian grandmother on the premises!). This was largely achieved by splitting the class up into three groups, each of which was responsible for a percentage of the resulting meal. My group was in charge of the lamb rogan jhosh, cilantro chutney, a spice blend and a delicious mango mousse. A disparate array of items, to be sure, but I rather liked it that way — the variety of dishes not only allowed me to try out a lot of different techniques, but it enabled me to use a staggeringly high percentage of the toys in the classroom’s extremely well-equipped gear cage.

Other dishes included saag paneer, a cooked pineapple chutney and several kinds of bread — including poori, a deep-fried riff on chappati that we were the first group to successfully achieve in some time. The class was structured to address most of the skill levels we had on hand, starting with a basic overview of the cuisine and some rudimentary knife skills for the beginning cooks and moving on to recipes that were, quite frankly, sometimes quite complicated for those who are more comfortable in the kitchen (homemade paneer, anyone?).

We also got a good lesson in kitchen etiquette (“It is extremely rude to stab and/or burn your fellow cooks; this is why you always make it very clear when you’re carrying something very sharp or very hot”), some lessons in plating and presentation, and an excellent demonstration of the incredibly refreshing qualities of a good, cold, Indian beer. Of course, none of this adequately describes the evening.

Like any successful night in the kitchen, it was part sweat, part confusion and part magic. It was pleasure and intense satisfaction, a great chance to meet some like-minded people and pick up some extremely helpful tips. It was also an opportunity to get to know the principles of this mysterious cuisine that had stymied me for so long. And it turns out, it’s not nearly as scary as I’d feared. It’s actually, once you get the hang of it, pretty accessible. Also delicious, delightful and well worth braving the MTA on a vile, rainy Sunday. (Though my dear departed umbrella would probably disagree.) -Shiv, Pithy and Cleaver