Last Friday, ICE celebrated the 224th birthday of the U.S. Constitution by cooking up some of the founding fathers’ favorite dishes for Constitution Day. 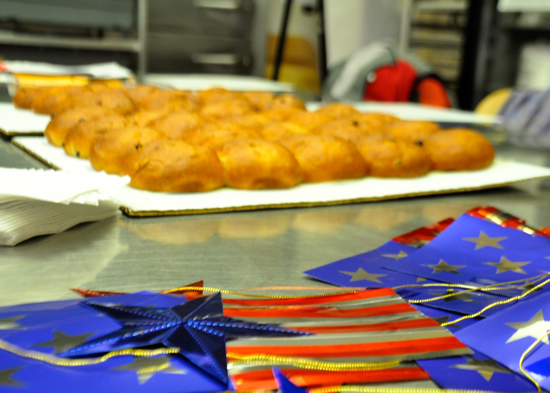 Food preparation in colonial America was influenced by many different cultures; Native American, Dutch, English, German, French and even Spanish settlers arrived in the New World and brought along their flavorful dishes with them.

One of the most notable treats of this time was the sweet Hartford Election Cake. Election day was a day of celebration during the early years of America. Due to the lack of modern technology, men would have to travel to the polls to vote and then wait to hear the election results. Since women were not allowed to vote until the Nineteenth Amendment was passed in 1920, their role was to prepare an Election Day feast, which often featured the Hartford Election Cake. The cake was fashioned made like sweet bread, with delicious cinnamon flavoring and currants.

The students at ICE recreated the cake using the authentic recipe, but with slight modifications. When Chef Instructor and Culinary Historian Cathy Kaufman tried to replicate the original recipe at ICE a few years ago, the ingredients had to be scaled back by about 20% so that it could just barely fit in ICE’s huge pizza ovens! Most of the recipes from this period do not include precise measurements; these recipes were created a pre-domesticated era of cooking.

There were very few sources for recipe, and no unified system for measuring or discussing cooking. Chef Cathy actually mentioned her preference for this lack of measuring restrictions because it allows for wiggle room contingent on the season of produce, flavorful nature (or lack thereof) for specific ingredients, and personal discretion. Among other food and drink of the founding fathers were Harriott Pickney Horry’s Duke of Norfolk Punch (1770), Martha Washington’s Apple Pancakes and Mary Randolph’s Nice Twelve O’Clock Luncheon. The class was both a lesson in history and a chance to sample some delicious treats under the knowledgeable guidance of Chef Cathy. All shared a good, historical celebration.

Note: the original spelling & punctuation from the manuscript has been retained. The “y” is an old-fashioned character for “th”.

To make little frying cakes with ye pulpe of apples or any other fruite.Take about ye bigness of 2 or 3 eggs of ye pap of roasted apples, or ye pap of any other fruite, & put into a dish with 2 or 3 spoonfulls of flowre, 6 eggs, & a little salt. Mix these well together, yn melt some fresh butter in a frying pan, & fry it in little cakes; & when they are enough, dish them up with rosewater & sugar, & stick them with candyed leamon pill.