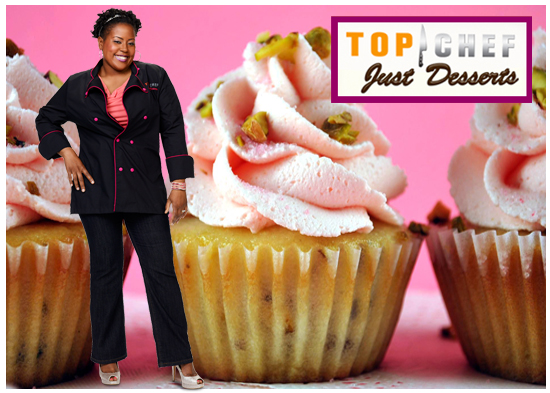 We were so thrilled to hear that another former ICE student would be competing on the Emmy- and James Beard Award-winning show! Fellow alum and graduate of the Culinary Arts program Gail Simmons is the host of the show. Competition gets whipped up to another level in the show’s second season, where the contestants will be dealt with challenging tasks ranging from concocting delectable fairytale showpieces to edible room décor. Camacho and her fellow contestants will endure pressurized challenges, quick fires and even guest celebrity judges that include the cast of Willy Wonka & The Chocolate Factory, renowned Pastry Chef François Payard and even one of the Beastie Boys!

We are so excited for Just Dessert’s Aug. 24 premiere!

For now, here is a peek of Camacho’s pastry chef credentials:

FAVORITE FALL DESSERT RECIPE: Classic apple pie with miso caramel and smoked vanilla ice cream The Port-Au-Prince native has been whipping up delicious confectionary creations ever since she was a young girl. In junior high school, Camacho would even make homemade candies, lollipops and caramels to satisfy the sweet tooth cravings of her classmates.

Since venturing to the Big Apple at the age of 18, Camacho attended ICE and graduated with honors with a degree in Pastry Arts and Baking in 2007. Fast forward to 2011 and the ICE alumna has made a career for herself as a Pastry Chef at ilili, a Mediterranean inspired restaurant located in New York City. It should be exciting to watch her bring her background and skills to the new season! In addition to another ICE alum in the Top Chef family, ICE alumni are also finding success on another hit TV show — last week’s premiere of the ninth season of Hell’s Kitchen featured two more ICE alumni. Elizabeth Bianchi and Krupa Patel both received Culinary Arts Diplomas from ICE in 2008. Now, the two are both contestants on the cut-throat culinary show that airs Monday and Tuesdays on FOX. Best of luck to these ICE alum in Hollywood!