The #IBMFoodTruck, Powered By ICE

This whole thing started off as a crazy idea that I didn't completely understand—and frankly, I was a bit skeptical. A computer that was going to help me cook better? I had my doubts. Yet two years and countless hours in the kitchen later, the culinary team at ICE and researchers at IBM have produced dozens of surprisingly delicious recipes. 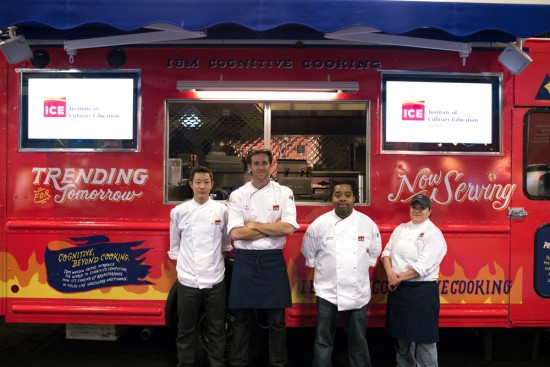 All of that work has led to this moment. As we cross the floor of a Las Vegas convention center, all around us vendors are busy setting up their booths, display screens, and computing demos. We walk in with crisp chef coats slung over our shoulders, carrying knife rolls, and I can't help but ask myself the same thing I suspect everyone around me is asking: "What the heck are we doing here?"

As we hit the center of the convention floor, it becomes clear. There it is, our home for the next few days: the IBM Food Truck. Parked in the center of the world's largest conference on cloud-based computing is the mobile kitchen that will help us erase all questions of why we're here—and all the doubts I and others have had about the role of computers in the kitchen.

Working in a food truck is dramatically different than cooking in the spacious kitchens at ICE. But for such a small space, the truck is incredibly well equipped (despite the fact that the counters that barely reach my waist). We've also got an incredible support staff on the ground here in Vegas: the team from Cut and Taste Catering. With their help, the food service has been a great success. 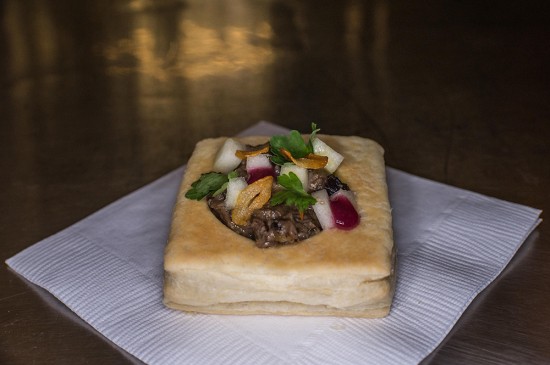 The conference attendees are a little wary of a food truck parked in the midst of a sea of computing displays—even more so when they hear what we’re serving: “A Baltic Apple Pie? What do you mean a computer helped you create it? Pork tenderloin… and vanilla?” We’ve heard "that sounds weird" more times than I can count. Thankfully, the skeptics are a bit adventurous and willing to give our creations a taste. It’s a blast to watch them take their first bites from the window of the truck. Their brows drop, they examine the food as they chew, and then they smile. This is the pay-off for the countless hours we’ve logged in ICE's kitchens learning how to use cognitive computing to create amazing food: “It’s good! Wow, I didn’t think it was going to be, but this really good.” 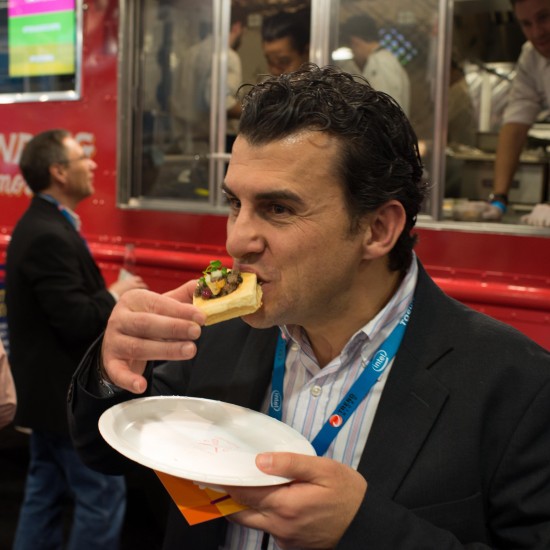 By now, the crowd is hooked on the idea of the food truck and cognitively created food. Now it’s their turn to give us feedback. Just as our professional students find their culinary voice at ICE, the crowd is finding their voice by voting on Twitter—and they've asked us to make burritos. Since IBM’s cognitive system is all about creating surprise, developing dishes that are inventive, creative and unexpected. We thought, "What if burritos were dessert?" So we recruited the system to help us create a burrito with chocolate. 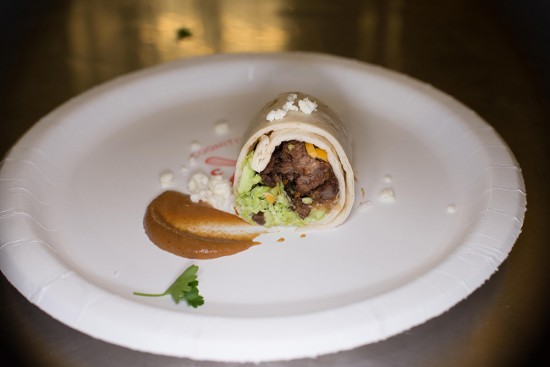 What followed was a list of ingredients that I’m confident no one has ever rolled up in a tortilla: chocolate, ground beef, apricot, edamame, and cinnamon, among others. We all thought the result was delicious and really interesting. The crowd agreed.  A number of people came to the truck, heard chocolate burrito, and walked away saying they weren’t ready to eat a dessert. We convinced them to come back and try this unusual combination of savory and sweet, and most who did were surprised and delighted. Yet, as with any creative dish at a fine dining restaurant, a few visitors to the truck found the recipe a bit too adventurous. 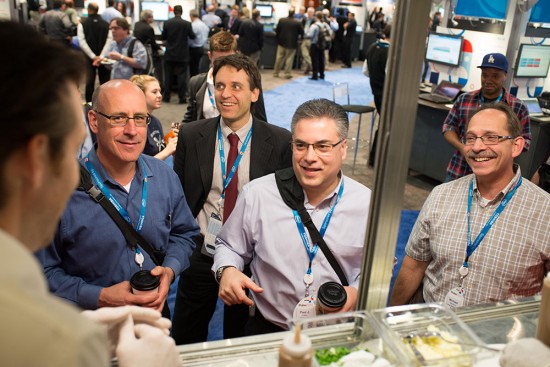 Today we prepped 600 Creole Shrimp and Lamb Dumplings for our increasingly engaged crowd. Encased in a fried chickpea dough was a mixture of ground lamb, shrimp, tomato, and okra. I don’t know if it was the flavors or the familiarity of the fried dough form, but a number of guests came back for seconds and told us that this was their favorite dish so far. And now that we've gotten used to cooking on board the truck, it's been fun to interact with guests and see how excited their are—not only about the dish itself—but the process we go through to create it. 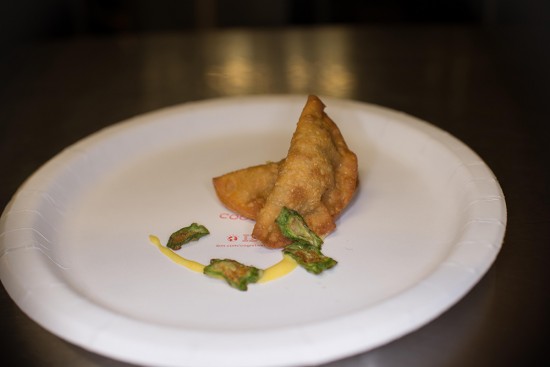 I'm actually becoming so practiced at speaking about the computer system that people have begun to ask affectionately, “So are you a chef or a nerd?” I’m taking that as a compliment; I am amazed, honored, excited to be a part of this project. To think this whole thing has grown from a few guys huddled around a computer in the kitchen at ICE, to now becoming the premier destination at one of the world's most innovative technology conferences. IBM runs half the world, and it's incredibly exciting that they've chosen to partner with ICE to reimagine the kitchen of the future. 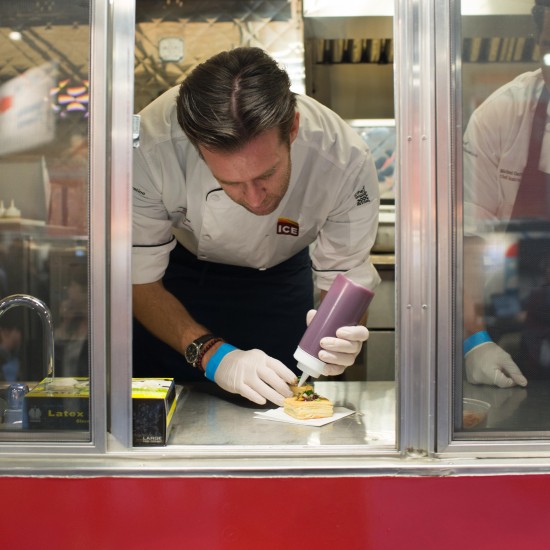 As we are getting to wrap up our time here in Vegas, the crowd logged one last vote and asked for a sandwich. We weren't about to serve up a glorified slider or PB&J—we were determined to make something that everyone would talk about for days to come. Hence, the Portuguese Lobster Roll, an incredible combination of lobsters, pimento, saffron, basil and crispy pork that got everyone outrageously excited. We actually had to cut one guy off after he came up for his seventh "tasting." It was the perfect dish to end on, with conference-goers texting their friends and coworkers that they better get over to the truck to taste what the chefs from ICE had just cooked up. 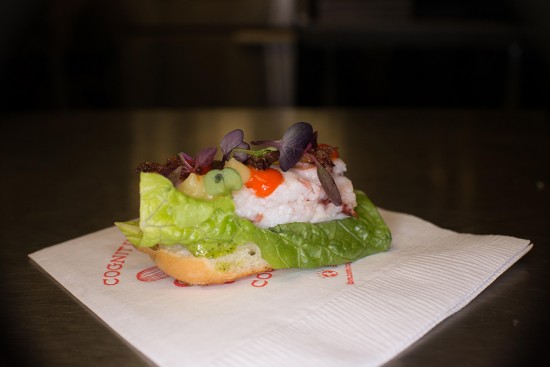 The entire event was a huge success. After two years of research and recipe testing with the cognitive system, it was amazing to finally share this revolution in cuisine with the public. But no matter how many pictures we post or stories we tell, there is only one way to truly understand the work that ICE and IBM have done together. You’ve got to eat it. We hope that we’ll have the chance to cook some these dishes for you someday soon! Until then, we’re off to SXSW!