From Hotel Upstart to Hospitality Expert

Over the course of more than 35 years in the hospitality industry, there’s little that ICE Dean of Hospitality Management Tom Voss hasn’t seen. His career spans the heights of both hotel operations and food and beverage management, serving as general manager of no less than three different luxury properties and numerous hotel restaurants.

Growing up in Tehran, Iran, Tom’s first interaction with the hotel industry came through an ad in the paper. Despite not knowing what the term “bus boy” meant, 20-year-old Tom landed a position at the stunning mountainside Tehran Hilton. There, his work ethic quickly caught the eye of the head of the hotel’s accounting department. The rest, as they say, is history.

One year later, Tom immigrated to the United States to study computer science and management at the University of Central Oklahoma. To pay for his education, Tom worked as a server at the local Hilton hotel, and it quickly became clear that he was far more interested in hotels than his educational path. However, like many students with prior education or work experience, Tom’s education turned out to be an asset in his career: “Knowing how to operate back-end databases and general principles of management—both of which I teach in the hospitality program at ICE—gave me a significant advantage over my peers in the field.”

After a few years working in management at both Oklahoma hotels and hotel restaurants, Tom relocated to Dallas, where he once again had the chance to work for the Hilton hotel group. “Over the course of my career, I worked for Hilton a total of six times. It’s a very interconnected industry, so you’ll find that the relationships you build at one property often help you find new positions as your career progresses.”

While in Texas, one of the highlights of Tom’s experience was overseeing operations at the Dallas Hilton Inn on Mockingbird’s supper club—the Dallas equivalent of New York City’s Rainbow Room. “It was the best location, the best menu and the best band in town,” says Tom. “That experience introduced me to high net worth clients who later asked me to consult on the openings of their hotel restaurants.”

Eventually, Tom became hungry for an experience at the epicenter of the luxury hotel industry: New York City. But transitioning to a more competitive market proved an eye-opening experience. “Moving to New York, I realized that my management experience in Texas wouldn’t be seen as equivalent—I had to take a step back and work my way back up the ladder to top-level hotels. That’s why it’s so great that ICE students start their careers in the New York City market.”

In New York, Tom ultimately found a role as the food and beverage director at the Vista Hilton International, a grand property that connected the two World Trade Centers. During that time, the Hilton group oversaw all restaurants within the World Trade complex, meaning that Tom reported to the director of some of the world’s most luxurious dining rooms—including the famed Windows on the World. 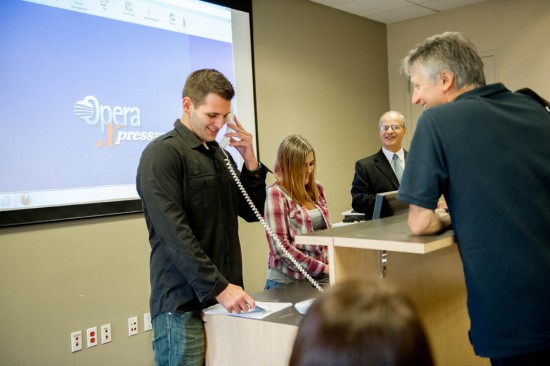 Over the next few years, Tom began to reconsider his future in the industry: “I realized that I had already reached the pinnacle of my career path—three times over—as a general manager. I was ready to do something different.” Ready to share his knowledge, Tom took on a variety of hospitality and tourism teaching positions, eventually becoming the chair of the Travel & Tourism department at the Katharine Gibbs School.

Over the next fifteen years, Tom reimagined the school’s curriculum, focusing on hotel and restaurant management. So when ICE was looking for a qualified expert to develop our hospitality management curriculum in 2008, it was no surprise that Tom got the call. In less than 10 years, the ICE Hospitality Management program has seen incredible success under Tom’s guidance, including several alumni who are now general managers of hotels. “We’ve placed people at the likes of the New York Palace and the Waldorf Astoria straight out of school,” says Tom. “Our students find success because they have been trained not only on the core principles of hotel management, but also in such key technologies as the OPERA software.”

Tom’s passion for hospitality hasn’t faded with time. He notes, “Hotels are a multifaceted business. They cater to a population that spans many cultures and languages, whereas restaurants more often deal with the native public of a city. What’s more, from conferences and galas to trendy lobbies overflowing with laptop-wielding freelancers, hotels have become so much more than a place to sleep. There has never been a more interesting time to be in this industry.”

Click here to learn how you can launch your hospitality career at ICE.