The Jones family farm near Huron, Ohio, works exclusively with chefs and provides some of the most sought-after vegetables and herbs in the industry.

To arrive at ICE on time, Jones had to leave the farm at 3:30 a.m., joking, “The roosters weren’t even crowing yet.” The Jones family has always been passionate about farming. When they were unable to keep up with sky-high interest rates in the late ‘70s, almost everything they had was lost. All that remained was 6 acres and a leaky old farmhouse. The family rallied and started over. “We were forced to reflect and rethink how we were going to survive,” Jones said.

Through the farmers’ markets, they met a French chef working in Cincinnati. She started asking for more types of produce and emphasizing flavor. Just five years into starting over, the family was forced to make a decision about what direction they would go in: sticking to farmers’ markets or working with chefs. Though most of the family felt that the majority of their business came from farmers’ markets and the chefs ate up more effort than they were worth, Jones’s father decided that chefs were headed in the right direction and they would work exclusively with them. Using a chef-driven approach, The Chef’s Garden has become wildly successful.

The farm now works with well-respected chefs such as Daniel Boulud, Thomas Keller and Alain Ducasse. Farmer Lee Jones is so well known in the food world that he has become famous for his blue denim overalls and red bow tie (he even wears his farm-friendly outfit to black tie events). The farm is able to supply produce to Disney World and ships to a hotel in Hong Kong twice a week. 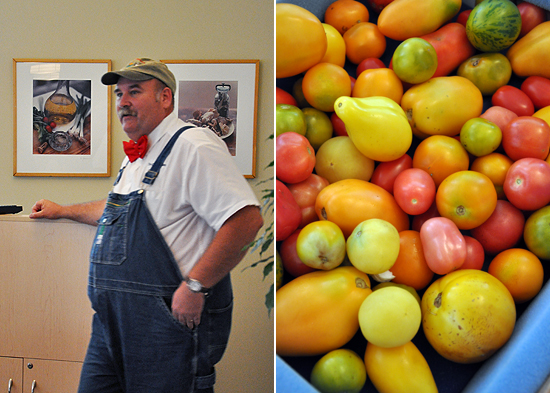 For Farmer Lee Jones, sustainability is about being “environmentally friendly, socially responsible and economically viable.” According to Jones, “we have to make mistakes faster than the competition.” They are constantly working on ways to modify and improve their methods. For example, The Chef’s Garden has a whole research team scouring archives for abandoned varieties of fruits and vegetables. Jones said every year they work on developing 300 products, approximately 25 of which will make it to their product line.

Other programs on the farm include the Culinary Vegetable Institute, a facility where chefs can come stay and try out new ingredients the farm is growing and Veggie U, a hands-on curriculum for fourth graders — “It is amazing to watch them go from thinking carrots come from a bag to realizing they come from a field.”

After giving his talk, the audience was invited up to sample the produce that Farmer Lee Jones brought in fresh from the farm. Along with fresh and flavorful tomatoes, spinach, peppers and other greens, attendees were able to sample some of the more unique products such as cucamelons, flowers, and miniature cucumbers. Everyone left full of fresh veggies and eager to try more.

Don’t miss a chance to learn more about agriculture and growing food at The Edible Garden at The New York Botanical Gardens. Go over to Monday’s blog post before Friday, August 13 and comment for a chance to win a pair of tickets.