This weekend marks the climax of the 2014 culinary awards season, as the industry's leading chefs and culinary professionals head to Lincoln Center's David H. Koch Theater for the 24th annual James Beard Awards.

For the second year running, ICE Culinary Management alum Matthew Riznyk will be the host chef at Friday's 2014 Book, Broadcast and Journalism Awards. From busser to waiter, chef to purchaser, bartender to maître d', Riznyk has worn many hats in the restaurant industry. In his current role as the Executive Chef of Great Performances, Manhattan's premier catering company, he oversees the culinary production for many of the city's most elaborate and elite events.

In anticipation of tomorrow's very special James Beard event, we caught up with Riznyk to discuss the arc of his career, what he's learned from his varied roles in the restaurant business and what it's like to serve dinner to several hundred VIPs. 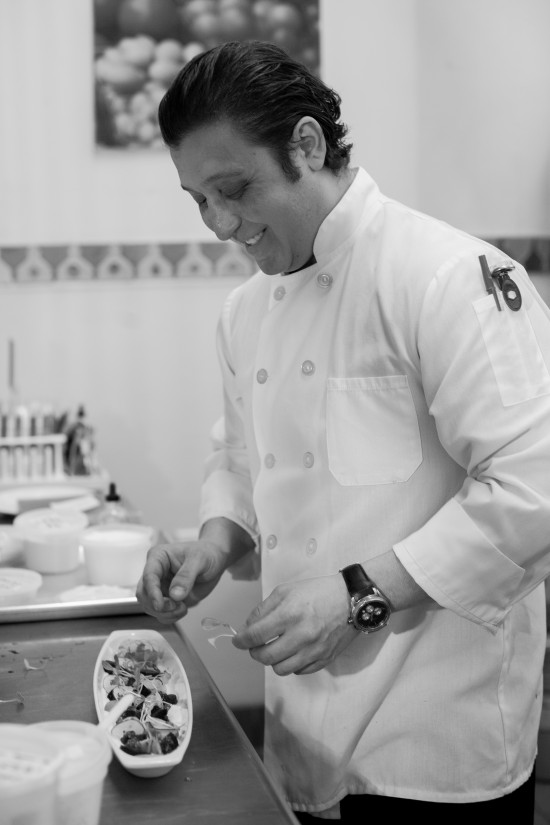 What inspired you to enroll at ICE?

Though I'm originally from the New York area, I had gone out west to open up the JW Marriot in Scottsdale and then transferred to the Coronado Island Marriot in San Diego. I was working restaurants since I was fifteen or so, but around age 21 I decided that it was time to get serious about a career, so I came back to New York and enrolled at ICE while working at a restaurant in Westchester.

I really liked ICE’s tenure; it had a long-standing tradition of culinary success and a great teaching program. And since I wasn’t coming straight out of high school and this wasn’t my first experience in the hospitality industry, I was looking for more of an intensive course. This way I could continue to work, rather than making a full-time four year investment. I really appreciated the opportunity to learn quickly, take that knowledge and put it to use.

I chose the Culinary Management program because, throughout my career, I’ve bounced around a little bit. Even in the same company, whether I was with a restaurant or at the hotel, I’d start off as a cook and then I’d pick up a bar shift here and there, and then I’d go back to cooking, then I’d go to serving, then I’d explore a different area. I’m kind of a sucker for knowledge, so I always like to learn a lot about different areas of the business.

Were there any instructors in particular who influenced you at ICE?

I remember Richard Vayda in particular as a Culinary Management instructor. He had great energy and an amazing way with people—very down to earth but just incredibly talented and informative.

What happened after graduation?

I got a spot in the management training program with Myriad Restaurant Group. I think that having an ICE education on my resume really allowed the doors to be opened a little bit. With my various work experience alone, I probably wouldn’t have been accepted into the program. In that program, I started at Tribeca Grill and basically worked through every position there from cook to buser to runner to server to maître d'—everything.

After a few months, I was made general manager of (the now closed) Layla, which was a big step, and I think it was a test. When Layla closed, I accepted the job of the Director of Purchasing for the Tribeca Grill and most of the other Myriad group restaurants. My role was to streamline purchasing for the whole group, and I also worked with their consulting arm to open some hotels in Kentucky, Providence and New Jersey.

So how did you end up at Great Performances?

When I left Myriad, I realized that I had worked in restaurants (front of the house and back of the house), at the bar, in consulting, purchasing and all these different roles in hotels and restaurants—but I had never really done catering before. With my personality, I was always looking to learn something different, so I took a position as a freelance cook at Great Performances and worked my way up for the last seven years.

You’ve really done it all; it’s amazing that you've had so many different careers

Exactly. And I mean, you know, I think I did the absolute right thing. Because now I take with me not only the experience of cooking but the experience of managing a room or a floor, knowing how food gets purchased—where it comes from and how it gets served— the whole process. I think that’s really helped me build my career and move up the ladder, because I understand all aspects of the business rather than just being focused in on one area.

As far as the James Beard Awards, what exactly is your role?

This will be my second year as the Host Chef for the Book, Broadcast and Journalism Awards. We develop all the hors d'oeuvresand the cocktail hour for the event, which are my recipes, and then support the guest chefs that they choose. When they come in from out of town, they work in our kitchen, we help them source their product, we give them prep, our equipment, and then also support their onsite execution, because a lot of them don’t have a lot of experience doing an event for 400 people in a tight timeline. We’re able to utilize our resources and our knowledge to help these world-class chefs take their food from an a la carte perspective to a catering perspective.

What would you say to ICE students who are thinking about catering as a future career path?

You have to have a passion for catering. Unlike a restaurant, it’s not just "a protein, a starch and a veg" on the plate and how quickly can get it on the table. We’re creating restaurant quality and style food in a large format. So it’s taking all the passion that you have for food, flavors, textures, plating—all those things that we love as chefs—and pairing it with a strong logistical and operational mindset as to how to get it done. It ends up being a lot more management. In most restaurants, even in really large restaurants, the kitchen staff is maybe ten or twenty people, whereas I oversee over 200 people. So it's a lot of high-end culinary work, but also a ton of logistic, operational, management, and business acumen as well.