The Desserts of Hot Chocolate with Chef Mindy Segal

This month, ICE was thrilled to host Chicago’s premier pastry chef, Mindy Segal, for a class featuring signature desserts from her restaurant, HotChocolate.

The 2011 James Beard Award Winner for Outstanding Pastry Chef  discussed her evolving cuisine, her plans to open a bakery, and her future cookbook. 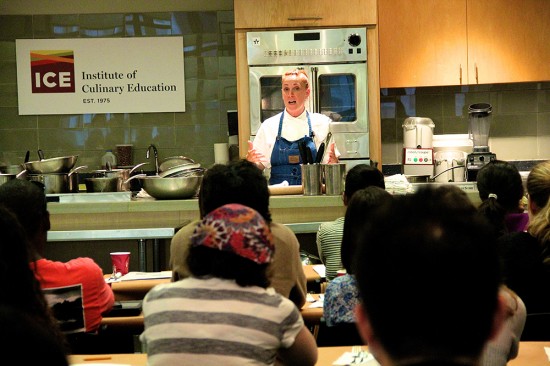 Mindy’s desserts are often personal takes on classic home treats, making them both exotic and familiar. First up, she treated us to an apple confit pie with bacon fat crust.  What's interesting about Chef Segal is that she frequently deviates from her own recipes, cooking more like a savory chef than a pastry chef. Given that baking is more science than art, her ability to adjust recipes on the fly and add ingredients whenever inspiration strikes is only further proof of her exceptional talent.

In addition to her innate ability to cook from her gut, Mindy also has a deep respect for her ingredients. She prefers to use products in their more natural states, rather than refining them until they are unrecognizably elegant. This was demonstrated in her bacon fat pie dough, in which she doesn’t strain the fat. In fact, she enjoys the residual, smoky flecks of bacon, representative of her rustic signature style. Similarly, Mindy proactively leaves gaps in the top of her crust, allowing the apple filling to bubble and boil over the edges. The effect is that of crave-worthy imperfection, recalling the pleasure children get from their grandmothers’ pies.

Next, we were treated to a brown butter cannoli with almond ice milk and hot chocolate foam. Here, Mindy gave us some important insights into how she composes a dish. She believes contrasting temperatures are important and often overlooked in desserts. She also discussed the need to have a refreshing component on the plate, so as not to make a dish too cloying—in this case, her ice milk spun without cream or eggs and barely sweetened. As for her cannoli base, Mindy deviated from the norm with an almond flour financier cake batter, again demonstrating that she's more likely to follow her own imagination than traditional pastry "rules". 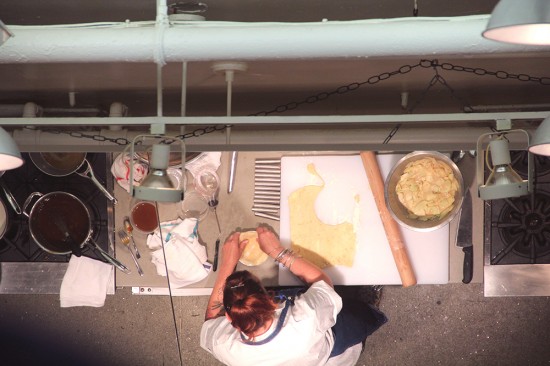 When it came to discussing the business side of her career, Mindy had a hard time vocalizing her triumphs and challenges. It’s clear that it’s not easy for such a passionate person to balance time in the kitchen with the administrative responsibilities of running a business. Gearing up for her second self-owned venture—a bakery—Mindy admitted that the practical aspects of business-ownership aren't her favorite part of the job. But, based on the outstanding success of HotChocolate, she's found a way to balance "the numbers" with her creative drive, a delicious means-to-an-end.

For more information about professional demonstrations at ICE, visit ice.edu.