When it comes to innovation in the restaurant world, few challenges have been as important as the public’s growing interest in nutrition and wellness. Of all the New York City kitchens to respond to this call for healthier cooking, few have gained as much attention as the Michelin-starred Rouge Tomate. 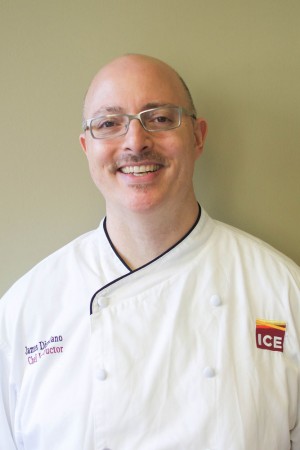 As the executive pastry chef for this groundbreaking restaurant, James Distefano spent six years translating the principles of classic pastry into award-winning healthy desserts. Today, as a chef instructor in ICE’s Pastry & Baking Arts program, James is sharing that passion for innovation with the next generation of game-changing chefs.

Growing up, James’ passion for food was sparked by his time in the kitchen with his Italian grandmothers, and he dreamed about studying cooking in Paris. By the time he was a senior in high school, his ambitions had strayed. “I was mostly interested in playing guitar and was passively considering a future in teaching,” James explains.

Luckily, James’ mom recalled his childhood passion and encouraged him to enroll in a local culinary school. Suddenly everything changed. “In high school, I was late every day,” says James, “but in culinary school, I was hustling—getting out of bed every day at four to make my six a.m. classes. I became that super-engaged kid, the one constantly asking questions—a total sponge.”

That enthusiasm carried into the first years of James’ career, working at a local New Jersey restaurant with an overflowing herb and vegetable garden. The experience instilled a love for quality ingredients that would shape the rest of his career. 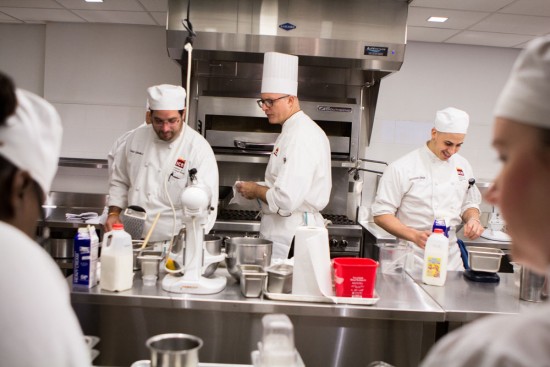 Through his first chef, Steve Santoro, James was introduced to Vinnie Barcelona, the executive sous chef at the River Café in Brooklyn. Vinnie and Steve encouraged James to pursue the big time in both New York and Europe. The pair also helped him land a position at a popular David Burke restaurant, the Park Avenue Café.

“The day I called Vinnie about job opportunities in New York, he had a spot for me to fill that night,” says James. “A lot of succeeding in the restaurant industry is about knowing how to jump when the right opportunity arrives.” After a short stint as the garde manger cook at Park Avenue, James was offered a role under pastry chef Richard Leach and pastry sous chef Joe Murphy (currently the executive pastry chef at Jean Georges), sparking James’ future in the sweeter side of the kitchen.

Working at Park Avenue provided James with connections to France, rekindling his childhood dream of studying abroad. “Chef David Burke had an incredible amount of connections, and when international chefs were in town, he helped us find opportunities to volunteer with them,” James explains.

Among those chefs was Alain Rondelli, a famed San Francisco-based chef with French roots. Alain helped James secure an apprenticeship under Georges Blanc in Vonnas, France, where James worked every station in the kitchen, as well as at Blanc’s boulangerie. When he returned to New York, James found a position with his former colleague, Joe Murphy, at Blue Fin as the pastry sous chef.

On opening night—New Year’s Eve—the restaurant served 1,000 covers. “I had never cooked on that scale before,” says James. “We were quadrupling our batch sizes for everything—making 6-7 gallons of crème brulée base at a time and flying through it.” When Murphy left the restaurant five months later, James stepped into the executive pastry chef position, where he stayed until he received a call from David Burke.

“It’s funny how your reputation stays with you throughout this industry,” James notes. “You end up working with the same chefs time and time again.” Burke recruited James to serve as the executive pastry chef for an 80-seat restaurant on the Upper East Side, davidburke & donatella, which quickly became the hottest ticket in town.

From there, James’ connections allowed him to juggle positions at a luxurious upstate property, Harvest on Hudson, and 360, a small French restaurant in Red Hook with an innovative wine program focused on biodynamic and natural wines. Then James received a call from a former Blue Fin colleague that would change his career forever—an invitation to present a tasting for Rouge Tomate Executive Chef Jeremy Bearman. “As a thirty-something chef in the industry, you start to become aware of the impact of what you eat on your health, so Jeremy’s call came at the right time,” says James. “What’s more—when you’re told to use less butter, white flour and processed sugar, you have to start looking elsewhere, and that’s where creativity starts.”

From olive and avocado oils to alternative grains like sorghum and buckwheat, James was charged with adapting stereotypical “hippie food” into Michelin-starred desserts. Over six years at Rouge Tomate, James saw dietary restrictions like gluten-free or vegan transformed from inconveniences into his daily inspiration.

Today, as a chef instructor at ICE, James shares his enthusiasm for discovery and experimentation with a fresh generation of aspiring chefs. “What I love about a culinary school environment—versus training staff on the line in a restaurant— is that the opportunity to learn is so much greater. In a school setting, you can make mistakes, which is the best way to learn. In a restaurant, the goal is always to minimize mistakes, and thus, you eliminate those key teaching moments.”