From Corporate to Kitchen; A Culinary Journey

Eight short months ago, I walked into kitchen 1402 at The Institute of Culinary Education with sixteen other people for the first day of class in the weekend culinary arts program. 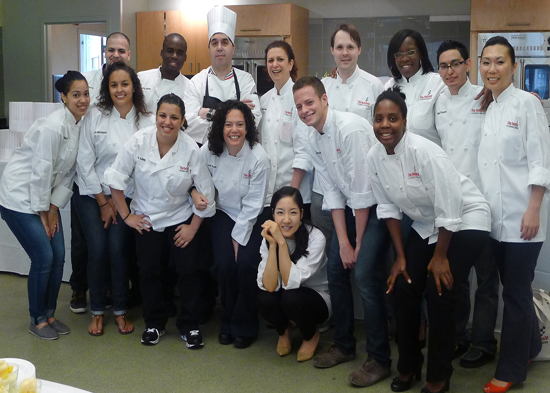 Eight short months ago, I walked into kitchen 1402 at The Institute of Culinary Education with sixteen other people for the first day of class in the weekend culinary arts program. I had aspirations of a second career and a promising new beginning. That day began an intense commitment and journey into a culinary arts program that I had been thinking about enrolling in for over four years. My good friend, Self-doubt, was sitting close by that day; I could feel its old familiar vibe in the air. But this time, it wasn’t only emanating from me. I knew that everyone else in the room was thinking the same thing, “what in the world am I doing here on an early Saturday morning?”

I arrived at ICE at the appointed hour as instructed; the crack of dawn (let’s just say it was still dark outside). Several weeks earlier, I picked up my professional tool-bag, and that incredible knife roll. Now, I could literally “pack my knives and go home,” if Padma ever asked me to. While standing in line to check in, I watched the hodgepodge of people gathering behind me; the reality of this journey began to set in. ID pictures taken first (mission impossible, always a horrible outcome for me), followed by being handed a bag of books that weighed about six hundred pounds.

I started having flashbacks of my early days at college. I picked up my uniform the week prior to the start of class and was wished “good luck” by the nice man running the shop. I must admit that putting on that outfit for the first time felt pretty unusual. The jacket, checks, comise hat, apron, blue side towels, and black heavy-duty slip resistant shoes were far from my attire as a creative director. Who cared? I was in this kitchen to learn, to work, and to figure out where I belonged in this brand new, yet not-so-new place so far away and utterly different from the world I had come from. Besides, everyone else looked just like me (picture deer in comise hats in headlights).

I was happy to see so many people of various ages and ethnicities. For a moment, the kitchen reminded me of that old-fashioned box of candy called “The Sampler.” We truly were a mixed bag! A cross-section of individuals tossed together from the salad bar of life, all of us with similar intent.

Today, due to an unpredictable job market and a roller-coaster economy, many of us are questioning our original career aspirations. Some by choice, and sadly, some by force. We’re collectively tired of being beaten up by corporate America or remaining unhappy in mind-numbing job situations. We’ve decided to take a risk by following our passion and seeking out something much more fulfilling. We’re taking a chance on a second chance.

Looking around the kitchen, I find that I’m in great company. An accountant to my right, a technician to my left, a research scientist at table three, a teacher at table two, and a lawyer across the hall in the same program that started a few months before mine. Wow. Suddenly, this creative director isn’t feeling so strange after all! We’re from such different places, yet we find common ground. We’re all professional people with real lives, families, responsibilities, and commitments, which continue on, completely separate and apart from here. And we’re all passionate about this new undertaking. We’re sure to be challenged, but I know we’re up for it. And we never would have met under any other circumstances. I actually started to feel comfortable. And then the chef walked in…