A lot has been happening at ICE since the school took up full-time residence at Brookfield Place in May. For me, the most exciting element has been the creation of our new Culinary Technology Lab. Before your mind runs wild with cartoonish images of mad scientists in chef hats or smoking beakers full of neon liquids, let me explain.

The whole idea of technology is a funny thing. These days, we tend to assume that technology always refers to something with a screen or a certain fruit-based logo. But if you type the word “technology” into the search box on your smartphone, you’ll learn that it refers to the application of science or scientific knowledge to practical tasks. Every step in the evolution of cooking — from man’s discovery of fire to sous vide — is part of the history of culinary technology. Thus, in ICE’s Culinary Technology Lab, we’re bridging the gap between ancient and modern techniques. 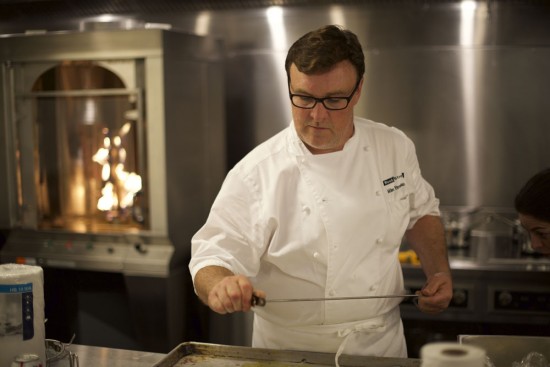 The act of cooking began with fire, and we feature some pretty impressive flames in our Culinary Technology Lab. The two most striking pieces of equipment in the lab are the Wood Stone Vertical Rotisserie and the Wood Stone Hearth Oven, with their 24-inch column and 800+˚F walls of fire, respectively.

If you’re not familiar with the concept of a vertical rotisserie, it’s like a merry-go-round of deliciousness. At the top are a series of hooks that move in a clockwise circle, rotating in place as they turn. Any variety of food may hang from these hooks, and as each item spins, heat bathes it from the live fire in the center column and from infrared panels on the outer walls. The vertical rotisserie has revolutionized the way we teach roasting methods to our culinary students, allowing them to imagine possibilities beyond traditional oven roasting.

Experimenting with the rotisserie, we’ve cooked everything from classic roasted chicken, bbq ribs and suckling pig to pineapple basted with bourbon, maple and pink peppercorn. If you’ve ever picked up one of those ready-to-go chickens from the deli, you know how golden, delicious and juicy meat cooked on a rotisserie can be. But the vertical rotisserie has a distinct advantage over the standard horizontal model: you can build an entire meal on a single spit or roast two products simultaneously without the issue of cross-contamination!

By loading multiple ingredients onto a spit, you build layers of flavor. Just think about the juxtaposition of bacon, rosemary, onion, chicken and wedges of cauliflower — all roasting together, self-basting with the juices of each ingredient as they cook. On the other hand, you could roast an entire pineapple and a pork loin separately, preserving the integrity of each product. We’re eager to explore the limits of this versatile piece of equipment.

Next in the line of fire is the hearth oven. Weighing in at more than 3,000 pounds, it’s the cornerstone of the lab and can perform nearly every task in the kitchen (save for washing the dishes). In fact, there are full-service restaurants whose only piece of cooking equipment is a hearth oven. While nearly anything can be cooked in the oven — from rib-eye steaks and asparagus to salt-crusted whole fish — at ICE, we most often use this piece of equipment to prepare the perfect pizza.

The even distribution of high heat in the hearth oven means that the average pizza takes just minutes to cook — not to mention that it yields a crispier, more flavorful crust than traditional ovens. The pizza is so delicious that, one night after classes, a group of ICE instructors even got together to fire up a few pies to celebrate the draft for our fantasy football league. While the flames of these cooking methods are visually appealing, cooking over a live fire appeals to our primal instincts in another way: through our noses.

The vertical rotisserie and hearth oven both allow us to cook at temperatures that are not possible with standard ovens or ranges. Higher temperatures mean more Maillard reactions (aka those saliva-inducing aromas that come from frying bacon, grilling steak or baking bread). In short, fire equals flavor and in ICE’s Culinary Technology Lab, the flames are burning bright.

ICE Alumni Had Some of the Best Restaurants in 2021