Cooking for a Cause — ICE Alum Pnina Peled

What would it feel like to prepare a truly life-changing meal? Just ask ICE Culinary Arts alum and hospital nutrition expert Pnina Peled. 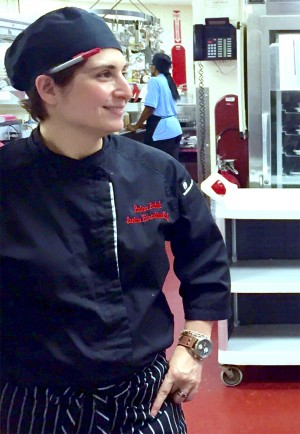 Before she was customizing nutrient-dense menus for sick patients — and even before she worked in some of NYC’s top kitchens — Pnina’s circumstances were just like the average ICE student.

Raised by a family of restaurateurs, her weekend wake-up call was literally, “Time to make the donuts!” She dreamed of pursuing a career in medicine, but her family encouraged her to stay close to home, so she did and earned her college degree in business management.

Initially, Pnina made rent by working in the accounting department at a law firm. While she excelled at her job, she knew accounting wasn’t her calling, so she enrolled in ICE’s evening Culinary Arts program to launch a new, creative career.

From the get-go, Pnina stood out from other students because of her familiarity with the restaurant business and her passion for learning. “I’ve always taken initiative and risks in my life,” says Pnina. “But I’ve also been one to self-educate. All my life, if I wanted to know more about something, I would read about it and try it. From cooking to nutrition, I’ve been able to accelerate my learning that way.”

As part of the Culinary Arts program at ICE, Pnina secured an externship in the kitchens at Becco and then a full-time position in the kitchens at Eleven Madison Park under Chef Kerry Heffernan. “Working at EMP was an awesome experience. They started me as garde manger and one week later, the sous chef approached me saying, ‘I’ve never seen a newbie work this station as quickly as you.’ From then on, he had me working fish or sides on the hot line.”

About a year after she started at Eleven Madison Park, Pnina received a call from the general manager of a new Mediterranean restaurant in Chelsea. “He asked me to be the executive chef,” says Pnina, “and honestly I didn’t know if I was up to it! But my family is Israeli, and the restaurant was Greek, so I know the food from that region of the world well. It was an incredibly ballsy move, but I took a risk, and it made me incredibly successful.”

The restaurant was called Nisos, and under Pnina’s guidance it quickly became one of the hottest tables in town. “The concept was to reimagine Greek food with French techniques. I was there for two years, and the restaurant was so successful that we were packed every night. During brunch, there was always a crowd.” Nisos attracted the attention of other restaurateurs, and soon Pnina was brought on as the executive chef of Aleo, another Mediterranean restaurant in Gramercy.

“The investor behind Aleo wasn’t from the industry — he was a Wall Street guy. Thank god I had worked in accounting, because I ended up running everything, from the kitchen to the front of the house [and more].” After one year, that restaurateur offered Pnina a stake in the business and she became an operating partner. During and after her time at Aleo, Pnina also picked up freelance catering and consulting work for a number of small restaurants in the city.

Eventually, she was hired by an Italian hotel chain — Jolly Hotels — as the executive chef for the Cinque Terre restaurant on 38th and Madison. There, she received three stars from the New York Times. Pnina continued working in hotels, including the New York Helmsley, but something shifted when she gave birth to her first child. “I started reading all these books about nutrition and nursing,” explains Pnina. “That sparked a huge interest for me in how food relates to your health.” So when she saw a job opportunity at Memorial Sloan Kettering, Pnina knew she had found her match.

“Sloan Kettering was a whole other ball game. It required me to bring together all my experience in various parts of the business. I was in charge of in-room patient service, cafeterias that fed about 3,000 people a day, food sold in the gift shop and adjacent cafes — you name it.” Under Pnina’s leadership, MSK scored in the 99th percentile of all American hospitals for its food quality, temperature and service.

What’s more, Pnina implemented food cost measures across the hospital’s culinary division, dramatically increasing revenue for the hospital’s food and nutrition department. In fact, Pnina’s name became so synonymous with a revolution in hospital food that she received a dedicated feature in the New York Times. Even with these thrilling figures, what inspired Pnina most wasn’t the opportunity to brandish her exemplary business skills.

“A body can’t recover from sickness without proper nourishment, and the opportunity to customize meals for sick children to fit their preferences and needs is the most rewarding part of my work. I’ve had patients or their parents call me before they’re admitted and say, ‘I’m looking forward to ordering your food while I’m in the hospital.’ That’s incredibly motivating.”

After five deeply satisfying years at Memorial Sloan Kettering, Pnina moved to New York Presbyterian’s Columbia campus. There she serves everyone from celebrities and politicians in the VIP amenities unit to the catering, food service and retail for the rest of the campus. Four senior-level chefs report to Pnina to help bring this incredible task list to fruition each day. In just a year and a half, she has been able to cut down on food waste, improve the quality of the food and boost food service revenue considerably.

“As someone who wanted to be a doctor as a kid, it’s incredible that I’ve been able to bring this into my life,” adds Pnina. Her prescription for chefs interested in the health care sector? “You need to have experience in every part of the business — catering, fine dining, business management, recipe development, etc. If you can bring all of that, you’ll be much more in demand.”