Congratulations to a Sweet Friend of ICE

This May, a friend of ICE, noted Pastry Chef Pichet Ong received an interesting honor.

Chef Ong was given an America’s Heritage Award by the Lower East Side’s Tenement Museum. Chef Ong is on ICE’s Chef’s Advisory Board, and, over the years, has brought in and/or hired numerous ICE externs and alumni. These fortunate students learn to combine modern cooking techniques, seasonal ingredients, style and some of the Asian flavors of the Chef Ong’s childhood.

Pichet, born in Bangkok and raised in Hong Kong and Singapore, has been named one of the Top Ten Pastry Chefs in America by Pastry Art & Design magazine and was selected as a “Pastry Provocateur” by Food & Wine. He is a multiple nominee for James Beard Foundation awards. Pichet has appeared on CBS News, Iron Chef, Emeril Live and Martha Stewart Live. At present, Chef Ong’s New York operations include the Spot Dessert Bar and The Village Tart. Earlier in his career, he spent a number of years working with culinary luminaries Jean-Georges Vongerichten and Max Brenner. Behind all this pastry power, is some notable intellectual prowess. 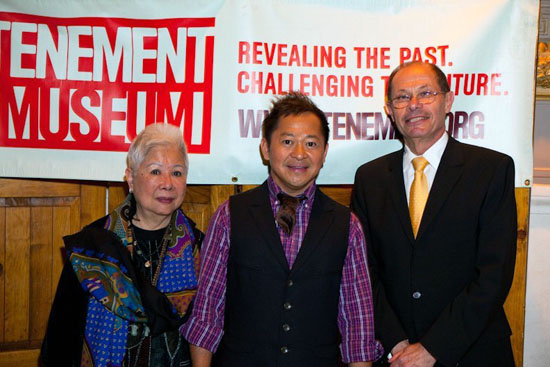 Pichet graduated Phi Beta Kappa in English and Mathematics from Brandeis, and then earned a Master’s in Architecture from Berkeley. Founded in 1988, the Tenement Museum tells the stories of real families who followed their aspirations to the New World and then negotiated the terms of their survival on Manhattan’s Lower East Side, the iconic neighborhood that was the heart of American immigration. Hundreds of thousands of visitors from around the world visit the museum at 97 Orchard Street every year to experience its’ innovative programs and explore the rich legacy of immigration, past and present. As part of the Tenement Museum’s 2010 Gala Dinner, the museum auctioned a four hour Sweet, Savory & Bubbly class for 18 people with Chef Ong, to be held at ICE and followed by champagne and cake at Tribeca’s Bubble Lounge. In a live auction, the package, valued at $2,700, went for $3,700. Congratulations to Chef Pichet Ong, and, the Tenement Museum!