For the ICE blog “Life as a Student” series, we hand the mic to students from our career programs and give them the chance to share what it’s really like to be a student at ICE. Our newest student blogger, Brooke Bordelon, a California transplant with Louisiana roots, is a student in ICE’s Culinary Arts program with her sights set on the food media realm.

Given her lifelong “obsession” with cooking and the skills she’s learning at ICE, we won’t be surprised if we see her in the test kitchen or food publication of her choice. In this interview, we introduce our readers to Brooke. 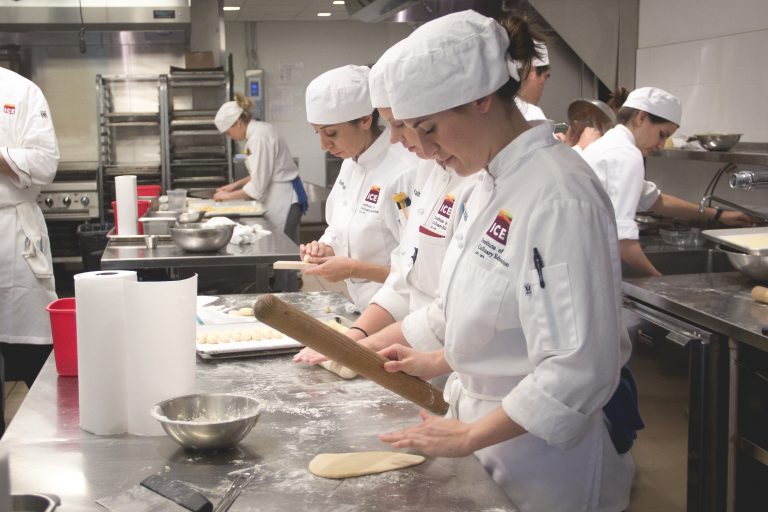 Funnily enough, my earliest food memory doesn’t even involve real food, but that fake, plastic food that kids used to play with back in the 90s. (I don’t know if kids these days still do — they probably have an app for that now.) I remember being obsessed with “cooking” in my miniature kitchen, complete with a pint-sized stove and microwave. Three-year-old me would putter around in that kitchen for hours, talking to myself while sticking all these different fake foods together with Velcro before making my family sit down to “taste” it all. Apparently it was one of the only toys I liked, go figure.

Growing up, was food a big part of your family life?

Both of my parents come from big families in Louisiana, which means that, growing up, I was more-or-less genetically predisposed to love everything to do with food. Before my family moved to California, I had never realized that everybody didn’t regularly have crab boils in their backyards or celebrate Christmas with a massive Cajun feast for 50-plus hungry family members.

After moving out west, I began to develop an appreciation for my Southern heritage as I realized how exceptionally unique the food, culture and people of southern Louisiana are. I can definitely say that this part of my background has had a profound effect on how I view food and cooking.

Why did you choose to go to ICE?

When I was trying to decide which culinary school to attend after college, my train of thought was, “If I am going to go to culinary school, why wouldn’t I go to one in the most exciting food capital of the world?” After attending ICE’s open house, it was clear that the connections and opportunities this school would provide me with would prove invaluable in my quest to build a lasting career in food media.

Then, the decision was simple. Within three months, I had schlepped all of my stuff from Dallas (where I went to college) to New York, successfully navigated the subway to buy all of my school supplies and settled into my apartment with just a week to spare before my first day of class.

Describe a day in the life for you as a student at ICE.

My class meets at 8:00 AM every morning, so typically I try to be up by 5:45 AM (“try” being the operative word) so that I have a little time to caffeinate myself and review the day’s recipes before I catch the subway to school. I love that no two days of class are ever the same; one day we may learn how to properly roast a chicken, while the next we delve into how to make perfectly crispy broccoli tempura.

After class, I usually hang out in the student lounge with friends while keeping a look-out for treats from the pastry classes to scarf down. Around 1:00 PM, I start making the trek back to my apartment in Murray Hill to catch up on any freelance articles I’m writing at the time and work on homework for the next day’s class. 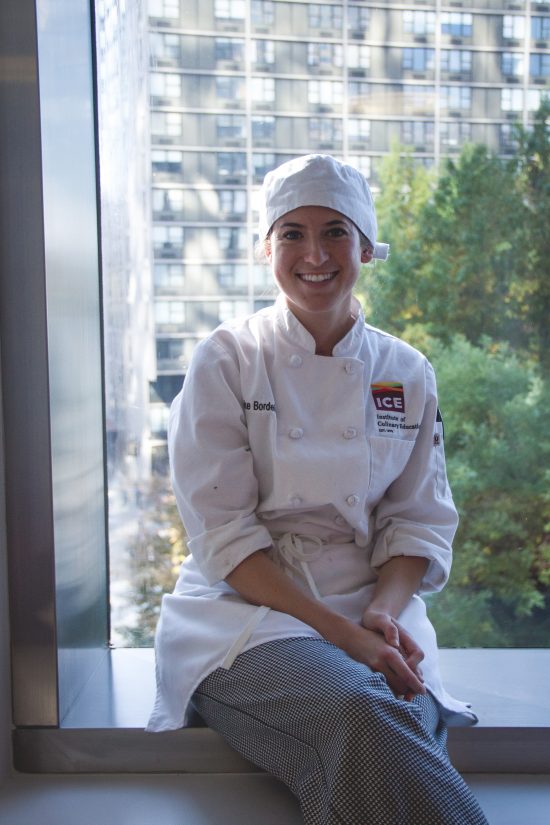 Sky’s the limit. What’s your dream job after you graduate ICE?

For as long as I can remember, I have always been passionate about writing and cooking. In an ideal world, I would combine the Journalism degree I received from Southern Methodist University with the culinary degree I’ll receive from ICE in order to mold a career for myself in food media.

Whether that means writing articles for a food magazine, working in a test kitchen or working on cookbooks, I believe that life is too short to compromise one passion for another when it comes to following your dreams.

Are there any skills you’re looking forward to acquiring?

Our class just started module three last week, which is particularly exciting because we’re incorporating all of the technical skills we learned in modules one and two — like sautéing, roasting, braising, etc. — into cooking dishes from different regions around the world.

Right now we’re focusing on France, but I’m especially eager to get to Asia because the techniques and ingredients used in that part of the world are so different from anything we’ve done thus far. It’ll definitely be a fun challenge and a nice change of pace.

What’s the most useful thing you’ve learned in class so far?

Above all else, the most useful thing I’ve learned in class so far is the importance of keeping yourself organized in the kitchen. If you don’t have your mise en place and tools ready to go, or if your work station is constantly cluttered, you’re bound to make a mistake somewhere down the line.

By nature, I’m not the most analytical person, so even though I had to learn this skill the hard way, it has since helped me tremendously. Staying organized keeps my stress levels in the kitchen manageable, allowing me to create a better finished product in the end. (Bonus: I don’t tick off teammates with a dirty workstation anymore.)

What advice would you offer anyone considering culinary school?

The best advice I could offer to anyone considering culinary school is to do your homework to really understand the culinary industry and where you would fit within it. Having an idea of how a degree in the culinary arts or culinary management will help you to shape a future career will be extremely useful in figuring out whether or not culinary school is the right path for you.

It may sound a little blunt, but a passion for cooking will only get you so far if you don’t have a plan for how to channel that passion into a livelihood. That being said, you may get to school, do a complete 180°, and decide to follow an altogether different career path from what you thought you wanted. The important thing to remember, though, is to always think about how the skills you’re acquiring in school are helping you to mold your future career. After all, that’s what school is all about.