Earlier this week, ICE President Rick Smilow returned from Chicago for the second time this year. Always having a keen eye out for culinary trends, he reported back to DICED on some of the most notable restaurants, chefs, and meals he encountered. In Part I of his report he talks about some of the restaurants’ classic foods and new variations he encountered. Next week, Part II will be devoted to one restaurant, Alinea.

Over the past three months, I have visited Chicago twice for long family or leisure-oriented weekends.Fortunately, these trips have also involved a lot of good eating — in fact, I’d say great eating. Chicago as a dining mecca is not a new story, but I’m here to report that in The Windy City: 1) innovation is alive and well, 2) restaurant hospitality and design are impressive, 3) traditional local comfort foods still satisfy and 4) pork is plentiful. Following are field reports from Alinea, Province, Blackbird, The Purple Pig, Big Star and Al’s Beef, six of the eight meals I enjoyed on these trips.

In the tony, upscale setting of North Michigan Avenue, I didn’t expect to find a restaurant like The Purple Pig. Open since late 2009, the restaurant is the creation of Jimmy Banos Jr. and Scott Harris. The Purple Pig’s promise and descriptor is “Cheese, Swine and Wine.” At lunch, it delivered, with small, tapas-style plates. My favorites were the Poached Tuna with Greek Lima Beans, Spring Peas with Feta & Mint, Pigs’ Ear with Crispy Kale, Cherry Peppers & Fried Egg and the assorted cured meats and cheeses.

Interestingly, The Purple Pig is physically almost on top of the famous Billy Goat Tavern, the bar and greasy spoon made famous by John Belushi in his early Saturday Night Live “Cheeseburger, Cheeseburger, Cheeseburger” skits. As the Chicago Tribune has its headquarters across the street, both restaurants could claim to be watering holes for thirsty newspaper reporters. But I think that their meal of choice in the ‘60s, a hamburger and Seagrams & Seven at the Billy Goat, has been replaced by Rioja and Manchego at The Purple Pig.

One of Chicago’s most successful and prolific chefs is Paul Kahan. Among many other distinctions, Kahan has won the James Beard Award for Best Chef of the Midwest. The most upscale location within his restaurant group is Blackbird. Though it opened in 1999, I had never been before and loved the food and its modern look and feel. For dinner, we went for the nine-course $100 tasting menu. Highlights included Peanut Gazpacho with Cured Hiramasa, Rhubarb, Pine and Brittle Peanut and Crispy Walleye with Green Papaya, Dandelion Greens and Charred Beef Vinaigrette.

An interesting aspect of the design of Blackbird is that about 40% of the seats and tables are located along the restaurant’s left wall. Those tables are pretty close together — some may say too close. In these seats, it is almost unavoidable that you will begin conversation with your neighbors. On our night, the diners on both sides were interesting, fun and food-savvy. So, we concluded that it is the type of person who dines at Blackbird. Don’t go there if you aren’t!

Chef Kahan’s other Chicago restaurants are The Publican, Avec and Big Star. Big Star is the most casual as it is essentially a bar that serves food. It is located in the old but newly chic Wicker Park neighborhood, in a building that was clearly once a gas station. Tables and umbrellas take up the front where the pumps once stood and the former garage doors created wide openings to the fine summer weather. Big Star is one of those hip eateries with no sign out front, lines of people waiting to get in, excellent people watching, a cash-only payment policy and very good Mexican-inspired food. It would be hard for a just-starting-out chef to pull all this off but once you get to Chef Kahan’s level, this kind of buzz is part of the recipe. It is also a recipe for great restaurant cash flow! 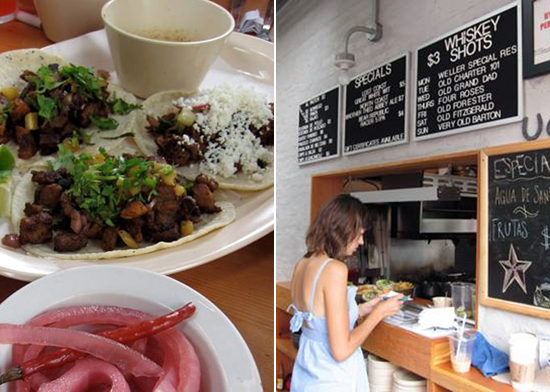 Lunch highlights included Tacos Al Pastor (pork), Tacos de Borrego (lamb shoulder), Tostada de Pescado (fish) and Queso Fuadido. The experience reminded me that when I lived in Chicago in the early ‘80s, the city was known for small, modest, hole-in-the-wall Mexican eateries that at the time would have been much more difficult to find on the East Coast.

This was my chance to once again sample the cooking of Chef Randy Zweiban, an ICE alum from way back in 1988. His stint as the Executive Chef at Chicago’s Nacional 27 earned him a place in our Alumni Hall of Achievement. Both the American-Latin culinary theme and farm-to-table cooking have carried over to this new restaurant in the West Loop. The group at our four-top split dishes like Arctic Char Ceviche, Grilled Peach Salad, Pork Ropa Viejo and Miso-Glazed Salmon with Edamame & Seasoned Onions. I also enjoyed the specialty cocktail called The Mid Americano, a concoction of Aperol, sweet vermouth and Michigan cherries.

Chef Zweiban told me that he had recently cooked a farmstead dinner in Grant Park, where over sixty diners sat on either side of a very, very long table.

As many of you know, Chicago is also well known for deep-dish pizza and hot sandwiches made from ingredients (meat, buns, pickles, peppers, and condiments) supplied by The Vienna Beef Company.I didn’t have any deep dish pizza this time around but I did get a Chicago style hot dog with “salad on top” at Al’s #1 Italian Beef.

The Chicago-based Vienna Beef Company was founded in 1893 but it was during the Depression that their distinctive plan for a Chicago hot dog took shape. For about five cents, vendors sold a whole meal on a bun — good value for tough economic times in 1929. They would start with a beef hot dog nestled in a steamed poppy seed bun and cover it with yellow mustard, bright green relish, chopped onions, tomato wedges, a kosher-style pickle spear and finally a dash of celery salt. This classic is exactly what I anticipated, ordered and devoured at Al’s.

I did not have time to eat in Rick and Deanne Bayless’s Frontera Grill or the adjacent Topolobampo but I passed those restaurants in the River North area several times. What I saw, as early as 11:30 am and 5:30 pm, were lines of smart diners waiting for the doors to open. As we all know, Chef Bayless is a scholar and master of regional Mexican food with a repertoire that is superbly authentic. These restaurants have always been highly popular, but when the chef and owner wins a national TV show like Top Chef Masters, as Bayless did early this year, it guarantees the lines will stretch around the block! I’m happy for them.

The last note in this posting has to do with Lollapalooza, the three-day music festival in downtown Chicago’s Grant Park that took place this past weekend. I did not attend any performances but I did jog thru the park about 10:00 am when bands, vendors, and roadies were setting up. I was twenty feet from the stage when Parisian rockers Phoenix were doing their sound check. As for rock festival foods, I was impressed to see offerings beyond the norm. It turns out that the food vendor line-up was planned and curated by Chicago Chef Graham Elliot (formerly known as Graham Elliot Bowles). That is why my kids could order things like a Mötley Crüe Burger, Tuna Tacos and Teriyaki Portobello Satay with Peanut Sauce.

Part II of this field report will cover one of the best meals of my life, at Alinea.