A Chef's Guide to Rome

In 2005, The New York Times published an article by Frank Bruni (then restaurant critic and editor of the Dining In/Dining Out section) about Roman cuisine. The article's overall message was: “nothing new is going on in Roman cuisine!”.  After a recent trip to Rome, my wife, Cheryl, and I are happy to report that this is still true.

This might be a slight overgeneralization; there are a handful of Roman restaurants doing “modernist cuisine-molecular gastronomic” spins on traditional Roman cooking. However, most Romans find the modernist trend oxymoronic, referring to this type of cooking as “all smoke and no roast!". Fortunately, Roman cooking and the culinary traditions of Lazio (best described as a rustic and pastoral cuisine based on meat and vegetables) has not changed too much since Etruscan sheep herders occupied the banks and mud flats of the Tiber river, as far back as 800-750 B.C. Hallelujah for that!

During our trip to Rome, Cheryl and I thoroughly immersed ourselves in its cuisine, enjoying the glories of traditional "cucina alla Romana". Below is a recount of some of our more noteworthy meals, as well as a list of restaurants that one should not miss if traveling to the “Eternal City”:

A very tiny neighborhood trattoria serving traditional Roman home cooking that is popular with locals. If you go, you will likely see a group of women sitting at a corner table hand-rolling, cutting and shaping all the sublime house made pastas. Their iconic Roman fritti misti of vegetables and meatballs in a delicate batter is a must-have dish.

As for the pasta, try any number of the variations of strangolapreti (“priest stranglers”), a very traditional hand rolled pasta dumpling that is particular to the central Italian regions of Tuscany, Umbria and Lazio. The story of how this pasta got its name goes back to the middle ages. Roman catholic prelates would gorge themselves on this simple pasta made water and durham flour until they choked, hence the name. The variations on strangolapreti that we found deeply satisfying were caccio e peppe, carciofi e gunaciale (artichokes and  smoked pork cheeks- both basic staples of the Roman kitchen) and alla carbonnara. The house-made sheep’s milk ricotta ravioli in a luscious butter and sage sauce ("burro e salvia") is also a must-try.

This beautiful restaurant is actually built into the cellar of an ancient Roman amphitheater that dates back to the height of the “glory days” of the Roman Empire. The walls of the restaurant are still the original brick work from this archeological masterpiece. Our dinner began with a perfectly-executed classic: carciofi alla Romana (large globe artichokes simmered in a broth of white wine, olive oil and herbs).

The pastas were also fabulous. Worth a return visit were the tonnarelle con bottarga e seppie (square-cut spaghetti made on-premises served in a sauce of baby calamari indigenous to the Mediterranean and bottarga, which is the salt-cured roe of grey mullet); a simple grilled branzino (Mediterranean sea bass); and finally, trippa alla Romana (tripe braised in tomatoes and mint with pecorino alla Romana, a dish that pays homage to the marcelleria - the butchers of the Roman slaughterhouses whose cuisine has dominated the Roman culinary landscape since ancient times.

They cooked with a strong emphasis on offal, because that was all they could afford). Fortunately for us, we arrived in Rome just as puntarelle - a variety of wild dandelion greens - started appearing in the Roman vegetable markets (puntarelle has a very short season from late winter to early spring). Puntarelle is traditionally served with a dressing of red onions, anchovies, lemon and olive oil. Needless to say, we enjoyed the version we had at Costanza. 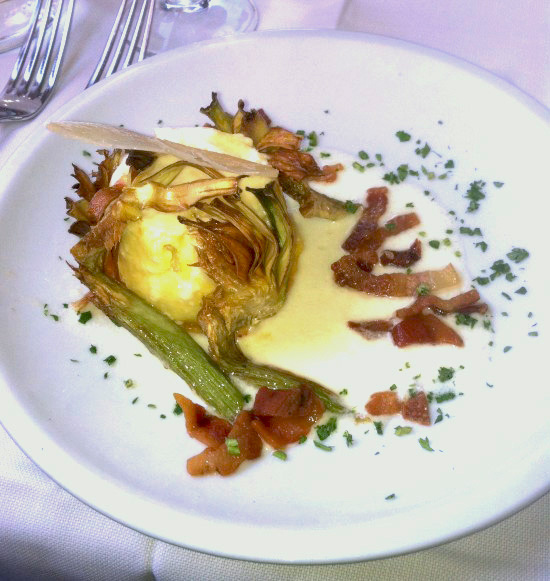 Ristorante la Scala is located in Trastavere, a very quiet, residential neighborhood southeast of Vatican city. We stumbled into La Scala serendipitously after a day of touring the Vatican. We were so fond of this local restaurant that we dined there twice. Weather permitting, sitting outside in the outdoor dining area affords one an authentic experience with a view of the beautiful church of Santa Maria della ‘Scala.

Being in Rome at the height of truffle season gave us an opportunity to indulge in the truffle menu of La Scala: burrata di bufala with black truffles and rughetta (wild arugula); light as air potato gnocchi with scarmorza (smoked mozzarella) and black truffles; fried artichokes with black truffles, fonduta and guanciale; and finally, sheep’s milk ricotta ravioli in an unctuous butter sauce showered with truffles.

Other dishes worth not missing are the tonnarelle pasta with zucchini flowers and cherry tomatoes, as well as the carciofi alla guidea (artichokes simmered and fried in olive oil), one of the truly great dishes born out of Rome's Jewish “ghetto”, dating back 2500 years. For dessert, try the crema di zabaglione con fragola (sabayon cream with wild strawberries).

This is another favorite where we had two wonderful meals. This restaurant has a clientele of largely local regulars and would fit right in in a New York City neighborhood. While the décor is modern, the cooking is in keeping with traditional Roman gastronomy. The delicious house antipasti tasting plate features a modern take on a molded panzanella salad, mille-foglia con burrata e alici (a very light pastry layered with buffalo milk burrata and marinaded white anchovies), pan fried oxtail meatballs with salsa verde, a croquette of baccala and potatoes and an eggplant-ricotta polpette.

The orechiette pasta with broccoli and potatoes was not the usual mess of broccoli flowers and potatoes swimming in olive oil. The vegetables had been cooked down to form an incredibly light, yet slightly coarse puree, bound by a light broth emulsified with a little olive oil. The execution of this dish showed the true skill of the kitchen. Further, d'Oro's rigatoni all' amatriciana with a copious garnish of crisp guanciale was one of the better versions of this classic Roman pasta preparation we had during our trip (pasta all' amatriciana, carbonara and caccio e pepe make up the “holy trinity” of Roman pasta preparations).

For the second course, we sampled stinco di maiale (pork shank braised with chestnuts and beer), guancia di bue brasato (beef cheeks braised in red wine and carrots) and abacchio scottadito alla griglia (the Roman classic of grilled baby lamb marinated with herbs, garlic and olive oil — whose title implies that when you pick up the grilled cuts of lamb, you burn your fingers while eating them!).

This wine bar and restaurant near the Pantheon gets mixed reviews. However, we had an excellent platter of fried zucchini blossoms stuffed with anchovies and mozzarella, as well as a memorable plate of fried olives. For the primi we enjoyed a very creditable spaghetti caccio e pepe and bucatini all 'amatriciana. Given the fact that Centralismo is a wine bar, we drank one of the more unusual wines on our trip: Lambrusco, a sparkling red wine from the Emilia Romagna region.

I would be remiss not to mention the Piazza Campo di Fiore, which is one of the truly great food markets in Europe with a wonderful salumeria. Worth visiting is Antica Norcineria Viola. If you are passionate about Italian salume - such as cured hams, salami and anything else that pays homage to pigs - this establishment is a must visit. If you find yourself fortunate enough to wander in there, try the testa, which has a beautifully silky and refined texture.

The wines we drank were too numerous to mention, but a few were truly memorable:

As far as Roman hospitality, we found the service in all the restaurants mentioned above to be warm and welcoming. Most of the Italians we met spoke English as a second language (some more fluent than others) or at least made an attempt to communicate in English. Be aware that unlike in other places, restaurants in Rome will charge extra for bread, which is automatically brought to the table and is generally of poor quality. (You will not be asked if you want it or not, so don’t be surprised by the surcharge when you get the bill. If you decide not to have bread, inform the wait staff when they bring it to the table.)