Tanya Pustelnik is gaining experience as a sous chef and plancha chef to make her pop-up dinner dreams a reality.

After a few short years working in the industry, ICE alum Tanya Pustelnik (Culinary, '19) has landed a role as sous chef of Anaheim’s award-winning restaurant, Strong Water, while maintaining her second job cooking at Costa Mesa’s Descanso. As the saying goes, she quite literally spins many plates.

Tanya thrives off of a busy schedule. Leaving behind a demanding corporate job as a manager to pursue a lifelong passion by attending culinary school, Tanya has proven that she can excel at anything she sets her mind to.

She spent many years working in the corporate world, traveling to several countries and living abroad in Australia for five years. Though she loved her career at first, Tanya felt a longing for something more. "I wanted to go to culinary school if I was going to leave the corporate world," she says. "I’ve always loved to cook and traveled the world with my dad, which was a big inspiration for me to start cooking professionally." She was ready for a new adventure.

In her previous work in the nutraceutical industry, Tanya created vitamins and supplements, getting acquainted with various health-supportive ingredients. She knew that pursuing a culinary diploma would help expand her horizons and skillset, so she enrolled in Culinary Arts at ICE in 2018 and completed her externship at Descanso Restaurant. The highly acclaimed, modern taqueria specializes in authentic Mexican cuisine prepared on a tableside plancha in Costa Mesa, California. 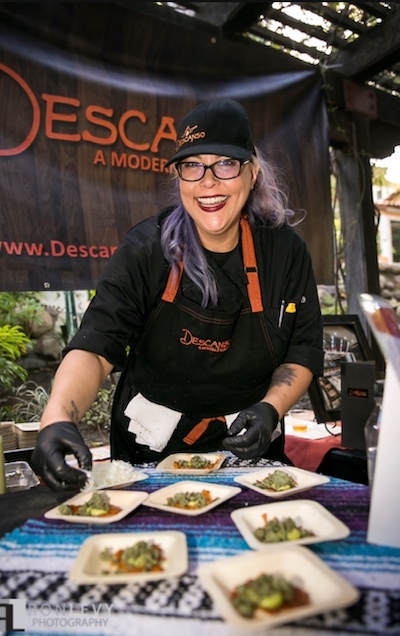 Now promoted to plancha chef at the restaurant, Tanya cooks everything from carne asada to chile rellenos on a large flat-top grill in front of guests. To expand her experience, Tanya went on to pursue the sous chef position at Strong Water, a tiki bar and Asian-fusion restaurant in Anaheim, California.

As a sous chef, Tanya has responsibilities like ordering, scheduling, taking inventory and recipe development. With extensive management experience from her corporate background, Tanya melded her familiarity with such tasks and her newly acquired culinary skills to settle into her new role. In addition, Tanya has shared her Indonesian background, culture and food with the staff at Strong Water. "My parents are both from Indonesia, and I’m Dutch-Indonesian. When Indonesia got its independence, my parents moved to Holland and then here," she explains.

"I grew up in Holland in the summers. My dad would take me all over Europe during my summer vacation, where I would try all different types of food. I just loved it," she raves. "My mom actually has an Indonesian oatmeal cookie recipe that’s nothing like anyone’s ever seen before, and she makes it for one of the desserts at Strong Water." The family recipe remains a secret, though — her mom won’t share!

Recently, Tanya has been working on creating an exclusive menu for Illumination Foundation’s Chef’s Table. This gastronomic charity event brings together top-ranked chefs to help combat homelessness in the local area. At the event, she will represent Strong Water, featuring an amuse-bouche of Arctic char crudo wrapped in sesame leaves. Descanso will also be in attendance, and she’ll be bouncing between the two stands — as she does in her day-to-day.

"I’ve always worked really hard, so to me it comes as second nature that I can juggle both jobs," Tanya says. She looks up to both of her executive chefs and enjoys working with international cuisines that offer versatile dishes, making the hard work and long hours worth the sacrifices. 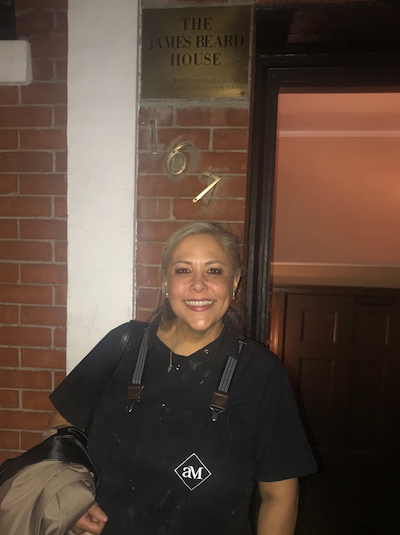 Reminiscing about her experience at ICE, Tanya says she gained lifelong friends, learned proper cooking techniques, and had wonderful chef-instructors like Louis Eguaras and Arnold Myint. “A few short months after I graduated, Chef Arnold brought me to the James Beard House with him to cook for an event honoring his mom in New York,” she shares. The event was called “JBF - A Tribute to a Nashville Legend - A Taste of Thailand Honoring Patti Myint,” for the notable chef who opened Nashville’s first authentic Asian market and Thai restaurant. Chef Arnold even featured footage of the event as the final scene of a documentary recounting his mother’s Thai roots.

Reflecting on her culinary journey thus far, Tanya says, “It’s a super exciting industry. Get ready to work your butt off, but it’s a super rewarding job.” As for those just getting into the field: “Don’t ever stop learning, don’t think you know everything ever. You’re going to learn something new every day,” she advises. As Tanya continues to grow and learn more from her peers, she hopes to host pop-up dinners at her home one day. Though the pandemic pushed her initial plans back, she looks forward to launching soon.

Pursue a culinary career path like Tanya with a diploma from ICE.