When acclaimed chef and restaurateur Marcus Samuelsson offered Chef Lay Alston an opportunity to help open the London branch of his Red Rooster restaurant, she jumped at the rare opportunity. Traveling and working in Europe was not something she dreamed was possible growing up in Queens, but a scholarship and mentors contributed to her culinary success.

Since the early age of 8, Lay had a knack for cooking. If she wasn’t in the kitchen at home, she was there in her after-school culinary arts program. At age 13, when New York City’s middle schoolers determine which public high schools to attend, she learned about Manhattan’s Food & Finance High School. She learned basic knife skills and kitchen rules as a freshman and was introduced to yet another youth-focused chef training program: Careers Through Culinary Arts (C-CAP). “My chef-instructor [at Food & Finance] told me when I picked up a knife that I had an innate ability to just cook and I had an ability to get into college from that,” she said.

Lay earned scholarship funding through C-CAP competitions and attended Monroe College’s School of Hospitality Management and Culinary Arts in New Rochelle, New York. “I started really getting into cooking,” Lay said. “Not only did it keep me focused on figuring out what I wanted out of life, but it provided multiple opportunities to be better.” She credits C-CAP as playing a key role in forging her path. “The program provides support, guidance and structure,” Lay said.

She completed her studies in three years and began working professionally at Morimoto. Chef Lay realized she had found her niche in a professional restaurant setting. “I knew this was the rest of my life,” she said.

At Morimoto, Chef Lay learned the rigor of a trendy, celebrity chef-driven restaurant. “It was very fast-paced,” she said. “We did 400 covers a night, which is pretty intense.” Within a year, she worked her way up the line, from garde manger to the grill station. Then her constant pursuit to expand her knowledge led her to shift focus to contemporary French cuisine at another celebrity chef-owned restaurant, Café Boulud. “I always want to elevate and push myself to do better,” Chef Lay said. “Café Boulud was 10 times more intense.”

At Café Boulud, she learned how to develop recipes that landed on the restaurant’s menu. “I was able to implement dishes in the restaurant, create my own and learn about different ingredients and how they work well with each other,” Chef Lay said.

Chef Lay credits C-CAP founder and chairman Richard Grausman and college dean Frank Costantino, who coached her for competitions and instilled professionalism respectively, for mentorship. “In high school, my chef-instructor Michael Lynch and the assistant principal Joe Calusi molded me into understanding that the life that you know is not the life that you’ll lead,” Lay recalled. “They told me that I had talent and ability. They made me believe in myself. I would not be here if not for them.”

That rings true for her appearance on “Undercover Boss,” which was pitched to her as a teaching competition opportunity at her alma mater, Monroe. “They had me teach a class of students with Marcus Samuelsson disguised as a boss shadowing me,” she explained. Fooled, she was asked to join another “competition” at which Marcus was in a new disguise. On their final, disguise-free meeting, Chef Marcus asked Chef Lay about her interest in travel before offering her a job at his London Red Rooster opening and his Stockholm restaurant, Kitchen & Table, along with a $25,000 prize.

“His cuisine is more of what I was raised around,” she said. “I had followed his career and thought how bomb of a chef he was. I was ready to go. I never imagined being outside of the country, so this was definitely a life-changing experience.”

After three months in Europe, Chef Lay returned to the U.S. where she became sous chef at Red Rooster Harlem. Eventually, the corporate chef, Leonardo Marino, left to open his own restaurant, Beatstro. Chef Lay followed him and then, after some personal reflection, decided she no longer wanted to be on the line in a restaurant.

“I needed to be doing something to help people in order to feel fulfilled,” Chef Lay said. “That’s why I always wanted to be an educator. Who I am as a person, what I’ve gone through and where I am trying to go, is to motivate other people, inspire other people, create opportunities and open doors for people.” 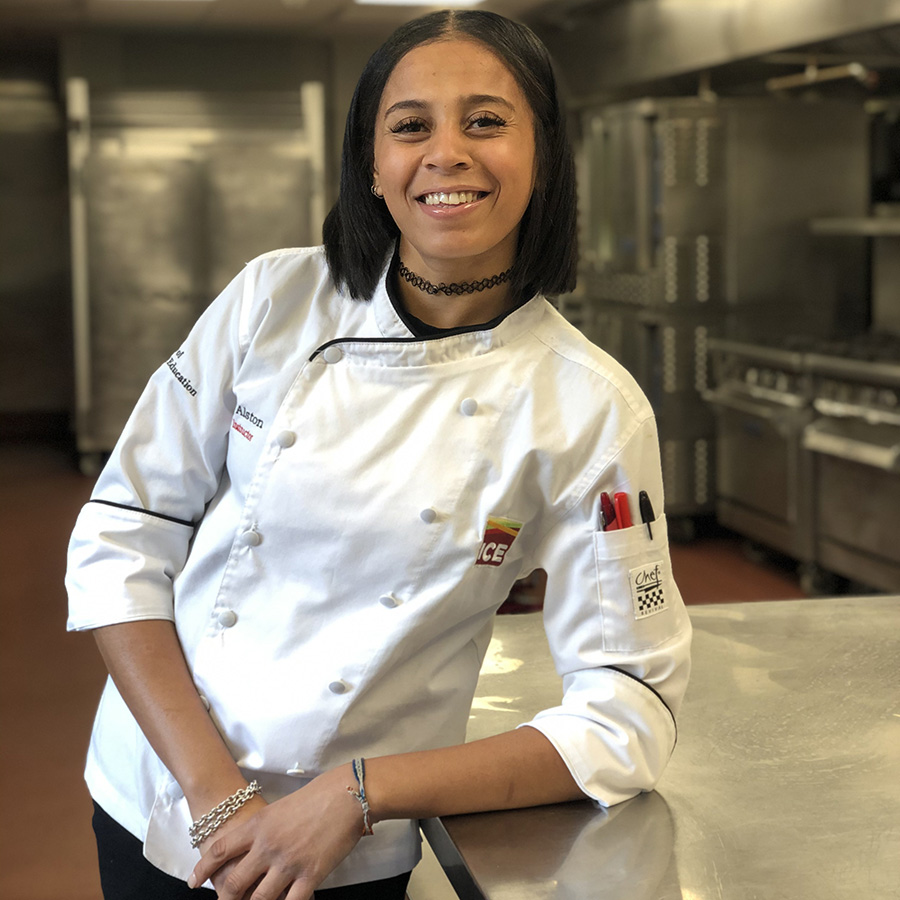 Chef Lay joined the Institute of Culinary Education’s Los Angeles campus in October 2019, where she particularly enjoys sharing her knowledge of seafood with Culinary Arts students. “I love all seafood and all aspects,” Chef Lay said. “My favorite thing to teach students is about fabricating fish.”

Her teaching is about more than practical applications, it’s about inspiration and mentorship. “I try to share my experience about how far I’ve come and what I did to get here so students can see that it is possible for them,” Chef Lay said. She tells her students: “If I can make it this far coming from where I did, then you can come from a better or worse situation and make it 10 times as far and beyond.”

Congratulations to Chef Lay and to ICE

I am so happy to see that Chef Lay has found a home at ICE and a calling for her passion of food and teaching.  Lay is a super young woman with a huge heart.  A win win for all!

What an amazing testimony !!!

I believe this is only the beginning of your success!!

So proud of who you have become!  It’s all the way up from here. Continued success

So so so proud of you Carlesha!

You've come a very long way & I'm excited to see what's more in store for you! 💕

So proud to read this article. Just like her to be so humble and selfless. She’s an amazing person as well as amazing chef. Way to go chef Lay

I'm so proud of Chief lay.I…

I'm so proud of Chief lay.I'm a little bit bias because I'm a friend of her parent's & family yes she has been in the kitchen since about 8 yrs young.I have MULTIPLE SCLEROSIS on my bad day's her mom would send her over to my apartment and she would feed me.This little girl is like a old lady 😋the food was great and the help I needed because having M.S. you can't be in heat so I could not cook for myself.

Can you imagine how great of a teacher she is going to be.

I am so proud of you my beautiful cousin. You are truly an inspiration to all. I love you and keep rising to the stars