ICE releases our school newsletter, The Main Course, three times a year. Every issue is packed with classes, news, articles, and interviews. One of the favorite features is reading the in-depth profiles of our Chef Instructors. The depth and breadth of their experience continue to surprise us. This profile, from the Winter 2012 issue, taught us a lot about Chef Instructor Hervé Riou and the incredible experience he brings to our kitchen classrooms. 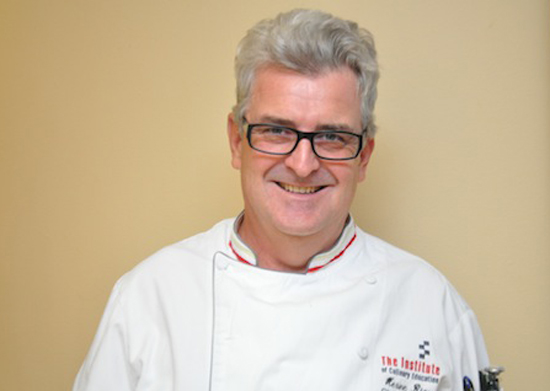 Like many French chefs, Hervé Riou grew up in a family where everything was made from scratch and began cooking as a teenager. He was 15 when he started an apprenticeship at a two-Michelin-star restaurant in Laval, near his native Brittany. He worked his way up, which led to opportunities in Dublin and Galway in Ireland, throughout France, and, finally, the United States in 1989. The Plaza and The Club at Madison Square Garden were some of his first positions here, but he quickly went on to open a restaurant in Morristown, NJ that received such accolades as best new restaurant and best French bistro in the Zagat Guide for numerous years.

After 10 years in America, Riou decided to launch his own consulting company; he has since been working for product companies such as Vermont Butter & Cheese and Naturally Delicious, as well as developing business and restaurant opportunities in China, where he has also appeared on television shows. Riou has of course never stopped manning the stove, and when not involved in restaurant projects in New York, is frequently cooking for private parties, weddings, and other events and working with sustainable farming initiatives.

In January 2011, he added teaching to his long list of skills and joined ICE as a Culinary Arts Chef Instructor. He sees his role as giving students the cornerstone of their career, which will then allow them to “build the cathedral.” Knowledge is not the only thing he shares with his students, however: the lifelong passion he has for his craft is another essential element of what he communicates. A member of the French Académie Culinaire — which is by invitation only—Riou is also a volunteer EMT in Glen Cove, NY, a coast guard auxiliary, and an avid sailor, who sails his own boat all over the world. After Hurricane Katrina devastated the Gulf Coast in 2005, Riou worked in Louisiana and Mississippi as a coast guard for nine months, which prompted him to become an EMT.

His love of the sea is not surprising for someone who grew up in Brittany. He started working on the local fishermen’s boats when he was just 9, doing whatever little jobs they had for him. To this day he still loves cooking fish and can “filet any fish you want.” He also worked on his grandfather’s farm, doing tasks such as picking haricots verts at 5 am or fencing the fields. Farming and fishing are the two hardest jobs he’s ever had, he is quick to say. They taught him that being a chef is being one element of a long food chain, and that appreciating all the other elements, from farmers to dishwashers to customers, is crucial to one’s success — and personal satisfaction. That, too, he hopes his students learn from him.