I was sitting in my Culinary Management class when I received the email telling me about an exciting upcoming CAPS class at ICE – "Ice Cream Innovations with Sam Mason". Mason is the chef-founder OddFellows Ice Cream Co., a hip and funky ice cream shop in Williamsburg, Brooklyn. The moment I read the email, I knew I wanted to attend the class.

While I had never been to OddFellows itself, I had been following them on Facebook for months, lusting after posts featuring Mason's latest edible creation. In short, I knew the CAPS class would be far more complex and exciting than a day's worth of ordinary ice cream making.

As it turns out, I was right. Chef Sam is a truly inspirational and creative guy, a wonderfully quirky mix of Brooklyn hipster, mad scientist and straight-up food genius. He reminds me of a blend between Benedict Cumberbatch and Adam from HBO’s Girls. If I haven't already given myself away, I definitely developed an ice cream crush over the course of his class, and I'm not alone. Chef Sam is so inspirational that a number of ICE Chef-Instructors, including the "King of Plating" himself—Chef Michael Laiskonis—stuck around to take some notes and observe his novel techniques. 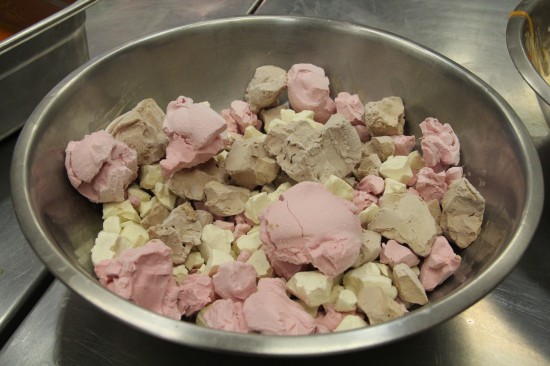 Chocolate, vanilla and strawberry ice cream frozen with liquid nitrogen to craft "Smash" Neapolitan[/caption] I'm a firm believer that you can benefit from any sort of class you take, regardless of whether or not you're already familiar with the material. But as this was a CAPS class, almost all of the attendees had at least studied pastry or culinary arts at some point, and many are currently professionals in the field. With that said, I am happy to report that I learned a tremendous amount from Chef Sam, including how to blend whole vanilla beans and sugar in the food processor to extract all the flavor, as well as how frozen nitrogen can help preserve the shape of certain ingredients when folded into the ice cream.

We froze chunks of meringue, graham cracker and lemon curd for the lemon meringue pie ice cream and froze globs of jelly into jelly rocks for the peanut butter and jelly ice cream. We even froze the different ice creams themselves, such as chocolate, vanilla and strawberry for our smashed-together Neapolitan. We also got to watch Chef Sam spin different ice creams, such as caramelized onion, using a KitchenAid and liquid nitrogen.

But the learning didn't stop there—Chef Sam also showed us how to craft components like chorizo-infused milk and oil, key ingredients for chorizo caramels and ice cream. We also discussed fat-washing techniques, which you can use for if you plan on making foie gras ice cream like they do in the shop, or even skirt steak ice cream.

The sheer amount of knowledge Chef Sam brought to class was staggering, but even more inspiring was his willingness to play around with flavors, proportions, and textures for the fun of it. Clearly, the guy is a genius. So, if ever you are thinking about taking a CAPS class, take it from this forever-student – if you feel inspired by the instructor and the topic, regardless of cost, it’s really worth it!