The restaurateur shared insights from nearly three decades of success at his landmark pancake and pie destination, Bubby's, in a Meet the Culinary Entrepreneurs lecture at our New York campus.

Ron Silver started working in restaurants at age 13. He washed dishes for five years, ultimately decided to be a chef and moved from Salt Lake City to Atlanta to learn in a prominent restaurant group. In 1987, he moved to New York after an invite to cook at a Guggenheim Museum event and spent time cooking at a high-end hotel.

When Ron decided to start a pie company for wholesale customers, he began baking at night in borrowed space. After building up to 90 clients, like Balducci’s and Dean & DeLuca, the restaurant evolved from some combination of perseverance and serendipity. 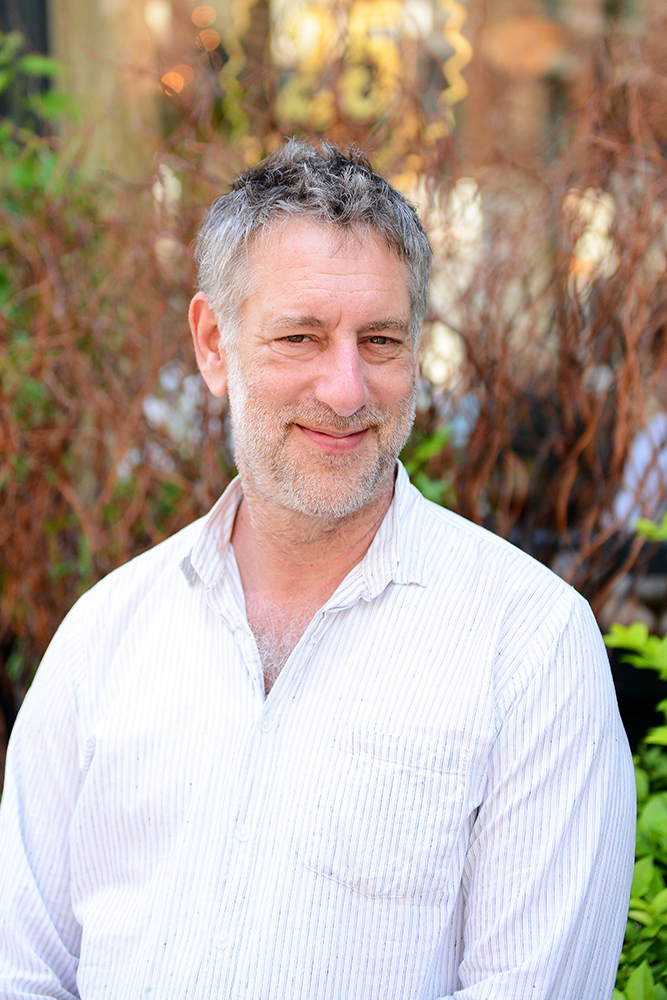 “On Hudson Street we were baking under cover because the guy who had the lease was trying to sell this business,” Ron told a room full of culinary management students. “So we were undercover baking there, but the whole neighborhood smelled like pie. I started pounding this guy to let me open up for one day at Thanksgiving, and he said, “no, no, no, no.” It became this running joke after a month of me saying every day, “just let me open for one day,” and three or four days before Thanksgiving, he said I could open for one day to sell pie. So we did, and we sold a bunch of pie, and the next day because the place was cleaned up, we threw a Thanksgiving dinner and decided that since this guy was out of town, we’d open the next day also. And we did that, and he was gone for three weeks or something, so I basically forgot about him, and then he did walk in in the middle of lunch one day. We went on like that until April when we had a lease, and that’s really how Bubby’s got started.”

On running a restaurant:

For the first year, I spent time literally weighing out salt and tablespoons of flour. I did it in the dumbest possible way because I have zero business experience. It really took years to figure out what costs meant. I thought that I was running at 25% food costs but it was really 25% of my gross sales as opposed to just my food sales, which is an important thing to know — and labor and all the rules and regulations and the ever-changing environment. There are a lot of moving parts. When you really get the thing open, you have to build a team and that really is a big deal.

As an owner, if you are a problem, you have to be open to hearing that it’s a problem. Having a mentor is everything. I’ve always had mentors. One thing that I’ve learned is how to look at the thing that I’ve built myself in a less personal and a more objective way, also how to roll with the punches and sort of gracefully lose, which is difficult. The restaurant business can be really good one day and really down the next day.

I make a lot of money on pancakes. Pancakes cover up a lot of mistakes. A lot of people have tried to copy Bubby’s and there’s this illusion that it’s easy. There’s this thing that having a busy brunch is like crack, but busy brunch is not a thing to live on. The rest of the week has to be running along well. Dinners are important. Monday through Friday lunch is important. It’s all important.

Bubby’s has been around for a long time, and I’ve had a lot of opportunities that I’ve passed on because I didn’t feel that we were quite ready for growth in a way, and I feel like we are ready for that now. I’m going to start putting together some sort of C-level management team, find a CEO and try to figure out a sane way to grow.

One of the things about Bubby’s is that it can serve a lot of different markets, and one of the things that I’m sick of is feeding rich people all the time. I have an idea for programs to put lower profit margin restaurants in underserved communities, and I know people who have done that and blown out/died miserably. I think that Bubby’s food is really something that everybody will embrace, and I look forward to the opportunity to break into that kind of a market with high-quality footholds in communities that are also creating a positive work environment and learning.

Know what your strength is and lean into that. If you’re going to open up a restaurant, try to drive it from your strong point. For me, that’s the dish room, and the kitchen is where I grew up, so I’ve always driven my restaurant from the kitchen. It’s important to actually put in the work before you open a place to have the skills to do the thing. Make sure you don’t suck. Do the thing that you’re good at, but you have to be good at it, otherwise go work for other people.

I look at business as community building, and that means a lot of different stuff besides just putting money in your pocket. It’s about looking out for people and seeing the community rewards. There are so many lovely things that come out of being part of the community. When there’s a hurricane or other horrible things, you get to be the community spot. It’s really important to understand your impact on people’s lives when you’re opening a business.

Start making your impact with training in Restaurant & Culinary Management.

Want to Launch a Food Product? This Book Can Help

Exit Strategy: How to Get a Greater Valuation For Your Concept