The amount of butter, sugar, eggs and cocoa used in a matter of four hours was impressive, to say the least. But I suppose it’s to be expected when the recreational baking class I attended at ICE was called “Best and Easiest Chocolate Desserts.”

This chocoholic-crew was led by Chef Nick Malgieri, author of eight cookbooks (most recently The Modern Baker). Chef Malgieri was the former executive pasty chef at Windows on the World and is currently ICE’s Director of Pastry & Baking. And is this ever a man who knows his desserts! As we plowed our way through seven different chocolate desserts, Chef Malgieri imparted the following tasty tidbits of wisdom and advice:

Measurements: As long as you’re using “level measurements,” as developed by Fanny Farmer, there’s no major advantage to using weight measurements rather than the usual volume measurement for household cooking. According to Chef Malgieri, the only reason you really would need weight-measurements is if you’re baking in large batches.

Extracts: When it comes to extracts, you can usually experiment with different flavors. So for example, a recipe we used for Lemon-Scented White Cake with Milk Chocolate Frosting could just as easily have been an Orange-Scented, or Almond-Scented white cake! This is a great way to play with and personalize recipes. 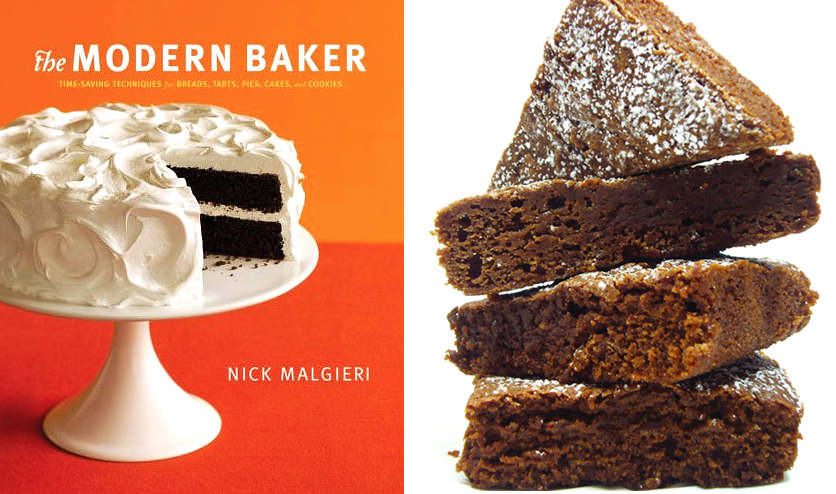 Lava Cakes: When making individual liquid center chocolate cakes (often referred to as “Lava Cake”) there’s a simple way to “go-pro” at getting the perfect liquid-to-cake ratio: set a timer and take out one cake every minute until you find JUST the right liquidity, and make a note on your recipe for next time.

Did you know? For a long time, and still today in many parts of South America, chocolate was solely used for drinking rather than baking.

Dutch-Processed vs. Natural = Alkalized vs. Non: By alkalizing cocoa you change the pH level, which affects how the cocoa will react with the other ingredients in your recipe. This process is usually credited with improving the color of the cocoa as well as increasing its solubility and decreasing the bitterness.