In perfect timing with the holidays, Sam Merritt, the founder of Civilization of Beer, conducted his regular Beer 101 class for the afternoon Culinary Management students right before ICE let out for winter break.

This class takes place during the beverage module of the program where students explore areas of beverage service, controls, responsible drinking and alcohol governance, bar structure, the roles of bartenders and sommeliers and learn about profit maximization opportunities all within the context of wine, spirits, beer and mixology.

Sam made beer tasting not only fun (not too difficult a task, right?) but highly educational for these potential future purveyors of the beverage. He is one of 100 certified Cicerone Beer Sommeliers in the US and spent over a decade selling and teaching great beer with the Craft Brewers Guild and the Brooklyn Brewery in New York when he realized that many culinary professionals lacked basic beer knowledge. As a result, he founded Civilization of Beer, a beer consulting company that’s mission is to promote the responsible enjoyment of high-quality, craft beer. 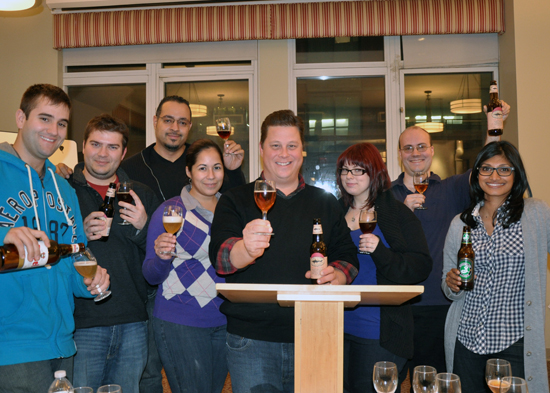 The class kicked off with an entertaining exercise called, “La Isla de Cerveza.” Sam posed the questions “If you were on a deserted island with your favorite person and could only order one beer, what beer would you pick? If they delivered the wrong beer, what would be the one beer that you would send back at the expense of having no beer to drink?” We laughed as some students reluctantly admitted to liking nothing better than an ice-cold Bud Light Lime.

Sam’s intention was to teach us good beer service is all about hospitality and knowing that it’s essential to serve what the customer wants to drink, not just what you like best. We also learned many other lessons and interesting tidbits. Did you know that beer was one of the first foods? Through fermentation, the first brewers — who were women interestingly enough — were able to preserve the nutrition of grain for consumption year round.

Of course, we hear of a new brand of beer every day, but I had no idea that there are over 180 different styles of beer. So much territory to explore! Then we moved on to the actual tasting. We sampled a variety of beers including Paulaner, Duvel, Brooklyn Lager, Samuel Smith’s Nut Brown Ale, Chimay Ale Grande Reserve, Lindemann’s Peche and even an organic beer — Georg Schneider’s Wiesen Edel-Weisse. We were sure to follow the proper cicerone tasting method by swallowing (instead of spitting as you would in wine tasting) in order to taste the bitter elements of the beer on the back of our tongues. We had a lot of fun heeding the advice of an old Czech proverb: You can tell the quality of a beer by sipping, but one wants to be sure!

Beer 101 is also offered as a recreational class at ICE. Sign up online for the next classes on Saturday, January 22 and Friday, May 6.