Cocktail Rules to Live By

“We are living in a golden age of drinking right now — it’s truly an extraordinary time,” Diana Pittet said at a virtual event on the history of the cocktail. The owner of Night Owl Hospitality, a cocktail catering company in Asbury Park, New Jersey, spoke to ICE students and alumni about the importance of being familiar with spirits and mixology in the restaurant and hospitality industry.

“A great amount of profit in your restaurant will be made off of alcohol,” she shared. “But also, the history of the cocktail, the story of it, is still being written, and you can be a part of it.”

To make your mark, Diana suggested following a few core principles. The first being, knowing when to shake or stir a cocktail. To determine the answer to that (basic) bartending question, Diana advised examining the ingredients. “If a cocktail has juice of any kind, dairy (cream, milk) of any kind, or eggs (whole or yolk) — if it has any of those three things, you’re going to shake it,” she explained because those ingredients are heavy. “When you shake [a cocktail], you are aerating it, getting everything together and diluting.” The opposite technique is employed if a drink does not call for those ingredients — you stir to avoid aerating. 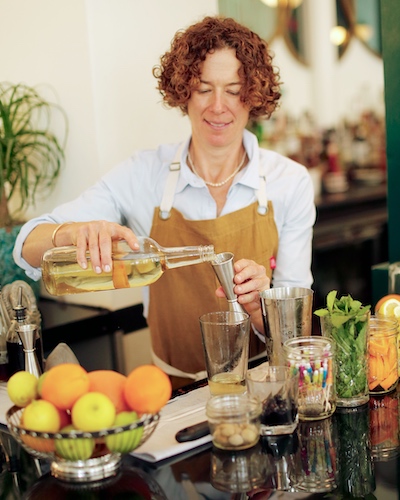 Though at times bartenders may stray from this general guideline, it is considered a best practice. “It’s not wrong to shake, but it will compromise the texture,” Diana said. For example, if a martini is shaken instead of stirred, it becomes cloudy. “And the beauty of a martini is that crystal clear look to it.”

When mixing your cocktail, Diana warned to always begin with the cheapest ingredients first. “For management students, this is a good thing to know,” Diana said. “If you mess up your drink at some point, you are only ruining the cheaper ingredients.”

Bartenders often put their hand at the bottom of the glass while they stir so they can tell if a drink has reached the peak temperature. “You are stirring the cocktail to both chill and dilute it, so a bartender can kind of tell by the look for the right dilution and by the feel if it is chilled enough,” Diana explained.

Diana recommended following the formula of classic cocktail recipes, most of which have been around for more than a century. “Cocktails are all about balancing strong spirits with the bitter or sour and sweet,” Diana said. “You need to keep those ratios all in good measure.” The easiest way to do that is to follow what she called, “tried and true formulas.”

Diana advised investing in proper equipment and good quality ingredients — preferably from scratch whenever possible. “Use fresh ingredients, nothing out of a soda gun. Make your own sour mix and use fresh syrups,” she said. “You need good ice. It should be clean ice so it’s not imparting any off-flavors. Beautiful, clear ice for the aesthetic and the proper ice so it’s not going to dilute the drink too quickly or under-dilute it.”

Even the garnish should be intentional. “Don’t just plunk a lemon or lime into a drink,” she said. “When I express a lemon into an Old Fashioned, it really binds the drink together. It is not an afterthought.”

Of course, the experience goes beyond the science of the cocktail. “When the bartenders of this new wave of cocktails began, they were very geeky and serious about cocktails, and they forgot, sometimes, about the hospitality.” Diana reminded us that people go to bars for the camaraderie as much as the service. “Now more than ever that is key.”