Six Takeaways from the Recreational Class

Last Friday, the row of liquor, beer and wine bottles lining the table in the classroom at ICE was a sure sign of a good time.

Bartender, educator and founder of ArtOfTheDrink.com, Anthony Caporale led the class through the ins and outs of a wide variety of drinks. While we swirled and sipped to learn the flavor profiles of each cocktail staple, Caporale guided our palates and provided an education on how different alcohols are made, what the requirements are for each and a snapshot of the laws that govern alcohol serving and consumption. 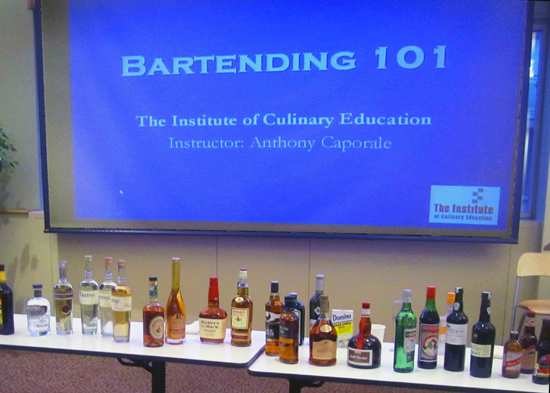 Below is just a sample of the tons of interesting facts and tidbits we learned over the course of the evening:

Prove It: The term “proof,” used to indicate the alcohol percentage in a bottle of liquor, is derived from when sailors used to get a good portion of their salary by way of a rum ration. Suspecting their rum was being cut with water, they would add a little gunpowder and set it ablaze. If it was less than 50% rum, it wouldn’t light, giving them proof that they were being cheated.

Life Water: Vodka is derived from the Slavic word voda which can be loosely translated to “little water.” As any given bottle of vodka is 60% water, the water used is just as important as the purity of the alcohol. It’s in this way that the Russians became famous for their vodka since the water there is generally the incredibly pure run-off of melted glaciers.

American Cocktails: According to Caporale, America is still in the process of rehabilitating from prohibition. Back when booze was banned suppliers could get away with selling really terrible versions of alcohol, so the original mixologists’ entire purpose was to mask the taste and make it drinkable. We’ve come a long way and now that our liquors are getting more and more refined, cocktails are being constructed to showcase the liquor, not hide it.

Bar Terminology: Knowing how to order a drink is half the battle, so here’s a quick run-down of some classic terms you might hear: neat drinks are enjoyed directly from the bottle, not mixed and served at room temperature; straight drinks are not mixed with anything, but temperature is to your liking; dry drinks are not sweet; and back refers to a drink to be enjoyed in tandem with your alcohol rather than mixed in.

Open It Up: While it’s sometimes frowned upon to cut your whiskey or scotch with water, it’s actually encouraged by many spirits connoisseurs as a way to take away the burn and allow you to really enjoy the flavor. Though according to Caporale, the only shame is in drinking something you don’t enjoy.

It’s a Keeper: So long as you keep your bottle capped, it will take decades for spirits to go bad. There’s many more factoids to be shared from the first class, and I’m looking forward to the second session where we will be learning how to mix and serve drinks. Stay tuned.