An Appetite for Knowledge

From a tiny farm-to-table restaurant in the Pacific Northwest to the high-volume luxury of NYC’s Waldorf Astoria, ICE Chef Instructor Sam Kadko’s career has been nothing if not diverse. After 40 years in the industry, Chef Sam is still exploring the limits of his skill set, from growing organic produce to implementing ICE’s curriculum at our partner school in Russia.

Sam’s culinary adventures began in New York City, where his Ukrainian father supplemented a career as a science teacher with part-time positions in restaurants. In fact, Sam’s first job was serving as his father’s bus boy at a catering hall in Brooklyn. It was there that he had his first glance into professional kitchens, sparking his interest in the culinary industry.

Sam’s family held traditional academics in the highest regard, so he first went to school to earn a degree in European history—planning to eventually train as a chef. “I continued to pursue restaurant work during school, and I loved just being in proximity to the kitchen, despite my menial role as a prep cook,” says Sam.

Soon after graduating from college, Sam enrolled at the Culinary Institute of America and began his culinary career in earnest. Halfway through the two-year program, he was required to find his own externship site, which led him to a French restaurant run by his uncle’s friend in La Jolla, California. “That experience was incredibly formative. The chef there really taught me to work by giving me just two weeks to earn the right to stay through the rest of my externship. If you’re lucky enough to have a mentor who tells you exactly what you need to do to succeed, it’s an important life lesson to learn how to achieve that success.” 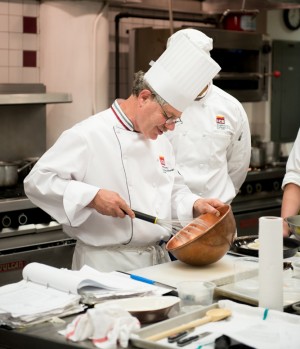 His time in California also provided Sam with his first opportunity to experience other cultures. He would frequently cross the border to Mexico with his kitchen colleagues, who introduced him to rustic local dishes including menudo (tripe soup). That curiosity about other food cultures stayed with Sam throughout his career, fueling his desire for both domestic and international travel.

After graduation, Sam’s career goal was to become the head chef at a small restaurant (under 100 seats). In three and a half years, he made that dream a reality at the restaurant Roanoke Exit in Seattle. “That was an amazing time to be in the Pacific Northwest,” Sam explains. “It was Seattle before Microsoft, and yet the city already had a reputation for having the most restaurants per capita of any American city.

Moreover, the regional produce was so exceptional that I was able to work in a farm-to-table format before that movement even had a formal name. I changed the menu every single day, simply inspired by what I found at the market.” Then, four years into his time in Seattle, Sam received a call from a culinary school classmate who was the executive chef at the Waldorf Astoria.

While Sam wasn’t planning to return to New York, he knew the opportunity to work at the pinnacle of hotel dining wasn’t an experience to pass up. Coming from his 40-seat Seattle restaurant, the Waldorf Astoria was an incredible learning curve, turning 600 covers every day at lunch alone. The Waldorf also introduced Sam to the tastes of such VIP clientele as Elizabeth Taylor. After the Waldorf, Sam continued to work in fine dining, from upscale French to New American eateries.

But after five more years in NYC, he knew he wanted a change of pace. “The truth is, even if you decide you don’t want to work in traditional restaurants anymore, having restaurant experience carries a lot of weight,” says Sam. “At that point in my career, I was able to transition to corporate dining. I oversaw executive dining rooms for Bank of America and many prestigious law firms because I had extensive fine dining experience under my belt.”

It was during his time as a corporate dining executive chef that Sam realized he might like to try his hand at teaching. Through his network, he found an opportunity at the New York Restaurant School, where he taught for nearly 20 years before coming to ICE. Teaching has afforded Sam the flexibility to try his hand at farming, and today he oversees a wholesale organic business that services several restaurants in the area from New Jersey to the Meatpacking District.

“When it comes to farming, I’m a one-man band—grower, farm hand, salesperson, delivery guy, bookkeeper. It’s a completely different, but very satisfying, side of the industry.” 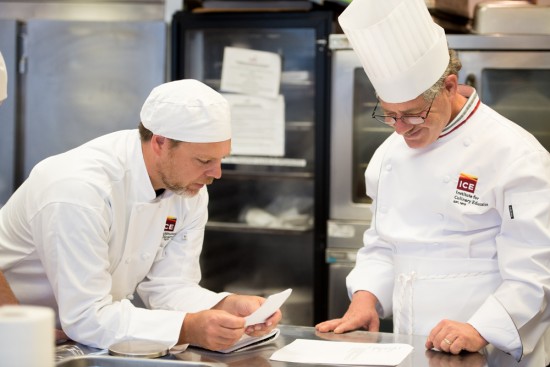 As if farming and teaching weren’t enough to keep him busy, Sam has been instrumental in facilitating ICE’s partnership with the SWISSAM hospitality school in St. Petersburg, Russia. “It’s been rewarding to work with the Russian students and introduce them to our curriculum. Most European schools have a classic French or euro-centric philosophy, so incorporating elements [only found in our curriculum] like Rick Bayless’ Mexican cuisine is incredibly unique, and they’re curious to learn about foreign ingredients.”

What’s more, spending nine months abroad over the past two years has given Sam a new perspective to share with ICE students in New York. Whether working abroad or cultivating a small plot of land in New Jersey, Sam has always remained grounded in his philosophy.

“From the beginning, my aspiration was to master a trade—to be as good as the chefs I saw in the restaurants where I first worked. Being rich or famous never crossed my mind—it has always been about refining my skills.”