Whether as chefs, cake decorators, specialty food purveyors or caterers, ICE alumni are finding success in a plethora of avenues in the food world. 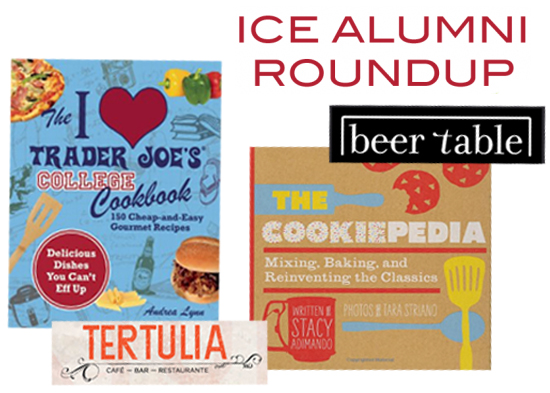 Check out just some of the alumni finding success and making recent headlines.

Lots of ICE alumni have been mentioned in The New York Times in the past couple of weeks: Justin Philips’ (Management, ’07) Beer Table has opened a second location in Grand Central Terminal. Anup Joshi (Culinary, ’04), chef de cuisine of the soon-to-open Tertulia restaurant, was mentioned in the article about chef Seamus Mullen’s cooking for personal health. Kary Goolsby (Management, ’01/Culinary, ’02) is chef of newly opened raw bar and craft beer restaurant, Upstate, in the East Village. James Sato (Culinary, ’03) and partners have opened Chuko, a locally sourced ramen shop in Prospect Heights, Brooklyn.

Time Out New York profiled Carl Raymond (Culinary, ’08) and his classes at the Astor Center.

Maxime Bilet (Culinary, ’05) was included in a piece on Bloomberg about the new dinners from the team behind "Modernist Cuisine."

Gail Simmons (Culinary, ’99) was interviewed about her favorite vacation spots in the Chicago Tribune.

Meredith Foltynowicz (Culinary, ’10) was quoted in a piece in USA TODAY about changing careers.

Andrea Lynn (Culinary, ’05) had a recipe from her new book, "I Love Trader Joe’s College Cookbook," featured in the Daily News.

Stacy Adimando (Culinary, ’10) was interviewed about her new cookbook, "The Cookiepedia," in the Brooklyn Daily Eagle.